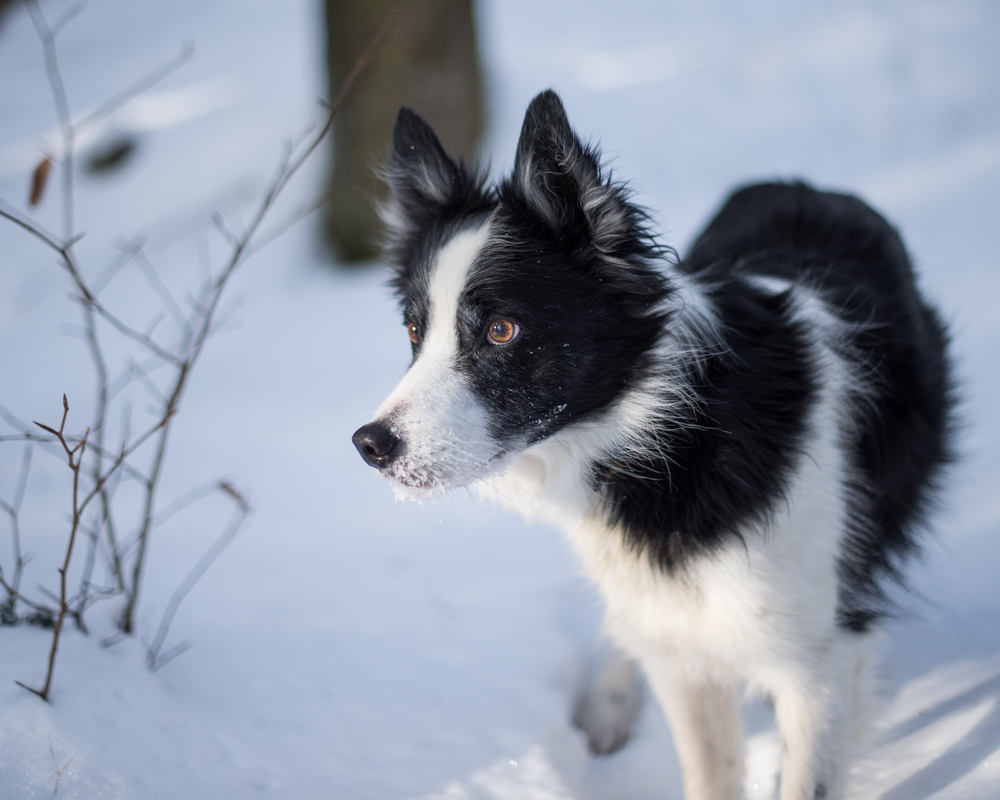 It seems appropriate to end the year the way it started, with an image of Luc, the one who’s most responsible for all this sheep stuff I’ve gotten myself into.  We went for a long walk in our woods this morning, a luxury for both the pups and me, gifted to us by temperatures too cold for work with machinery.  His gaze here is fixed on Cass; with the snow cover, the two have rediscovered the stalk-and-ambush games they played constantly when Cass was a pup.   I’m very curious to see who takes primary responsibility for initiating the new pup into the world of border collie games.

Three hundred sixty-five days ago I set out to post stories and photos from the farm every day for a year.  The challenge was appealing in an abstract sense — could I muster the discipline to follow though? — and in an artistic sense, since I had barely touched a camera since moving here.  I wanted to create a portal for friends to keep up with my mad undertaking, even if they couldn’t come and visit.  And I had a fuzzy hope that the accumulated weight of 365 daily stories might amount to something more substantial than simply jottings in a day planner.  I seem to have answers to the first two questions:  I made it through the year, though I doubted it many times, and in the course of making 15,000 or so images, I’ve learned and evolved as a photographer.  Many readers of the blog have told me about how it became part of their daily routines as well, and this news kept me going through periods when I had exhausted every possible idea, days when I thought I was too tired to remember my name, much less edit photos and write something coherent.

I confess that I often counted how many days remained until 31 December, and now that we’re here, I plan to pause for a bit.  The creatures in my life have been very patient with the hour-and-a-half I spent feeding the blog monster every day, but I’ve accrued a debt of time and attention that I need to start paying back.  And I’m hoping that a bit of distance will let me see this document of the past year more clearly, to figure out what lessons I can glean, and whether it may have some continued life in another form.  I don’t plan to abandon the blog, but I will be writing less frequently, when I actually have something to say.  I’m very grateful to those who have stuck with me through the year, and I hope I can keep your interest going forward.  Thank you, and happy new year.

My parents called me, alarmed, having heard news reports that the world was ending in an apocalypse of snow and cold here in the Northeast.  ‘Twas a little chilly this morning, but the lambs showed no sign of it, but for their new white whiskers. 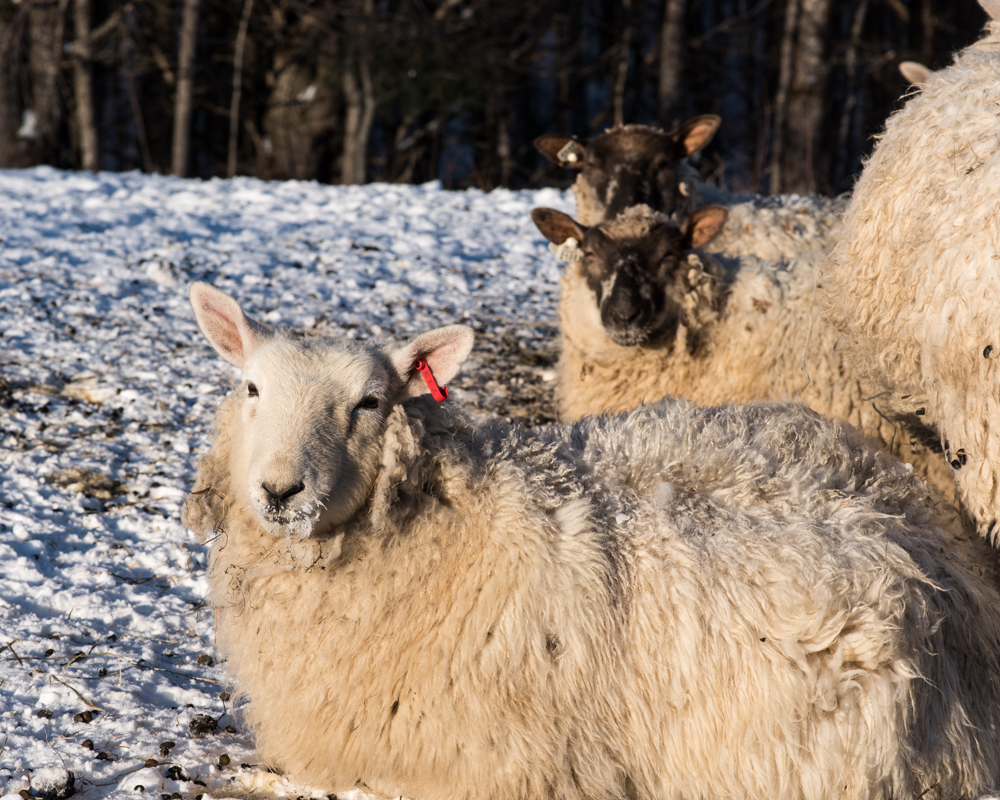 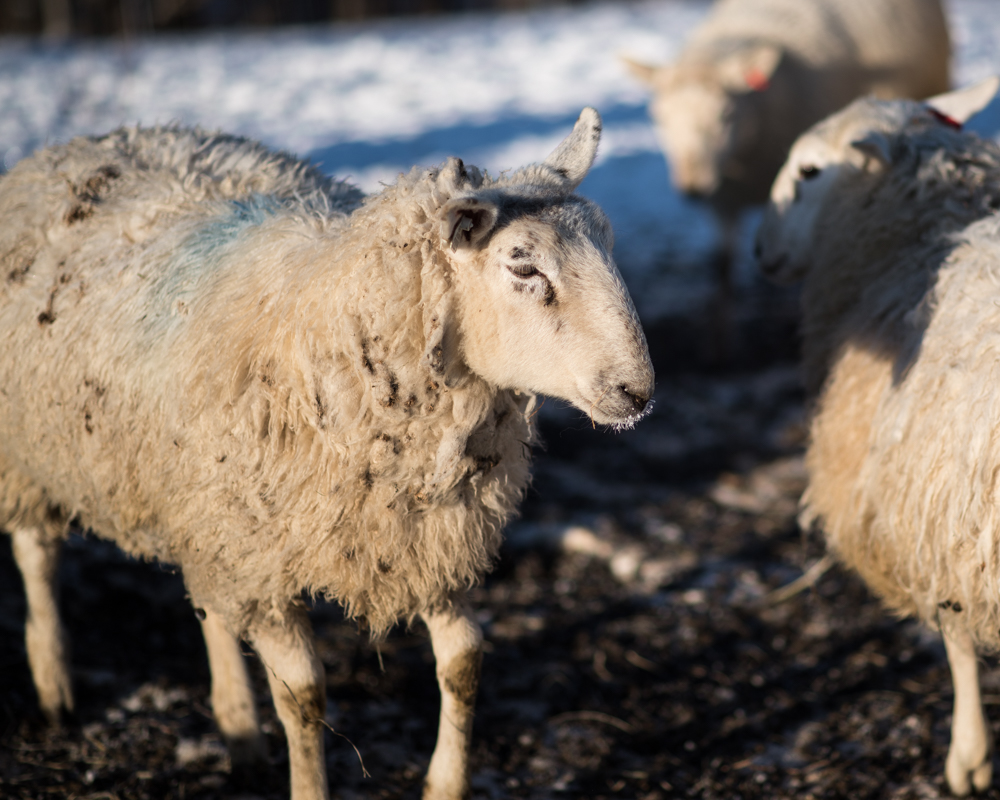 And while I’m not sure the physics bears this out, the cold seems to lend a clarity to the morning light. 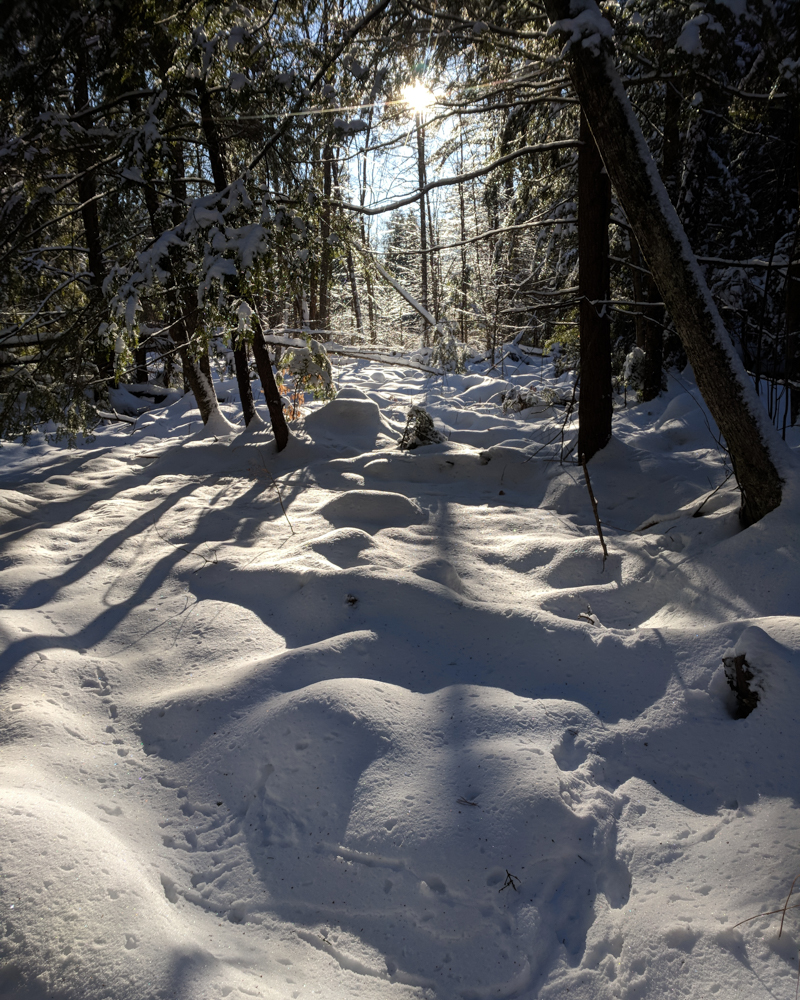 Friends from warmer places probably suspect I’m suffering some kind of weather-related Stockholm syndrome; perhaps, but I’m not prepared to trade the beauty of this time of year for perennial picnic weather.  I’ll check back in when it hits 20 below. 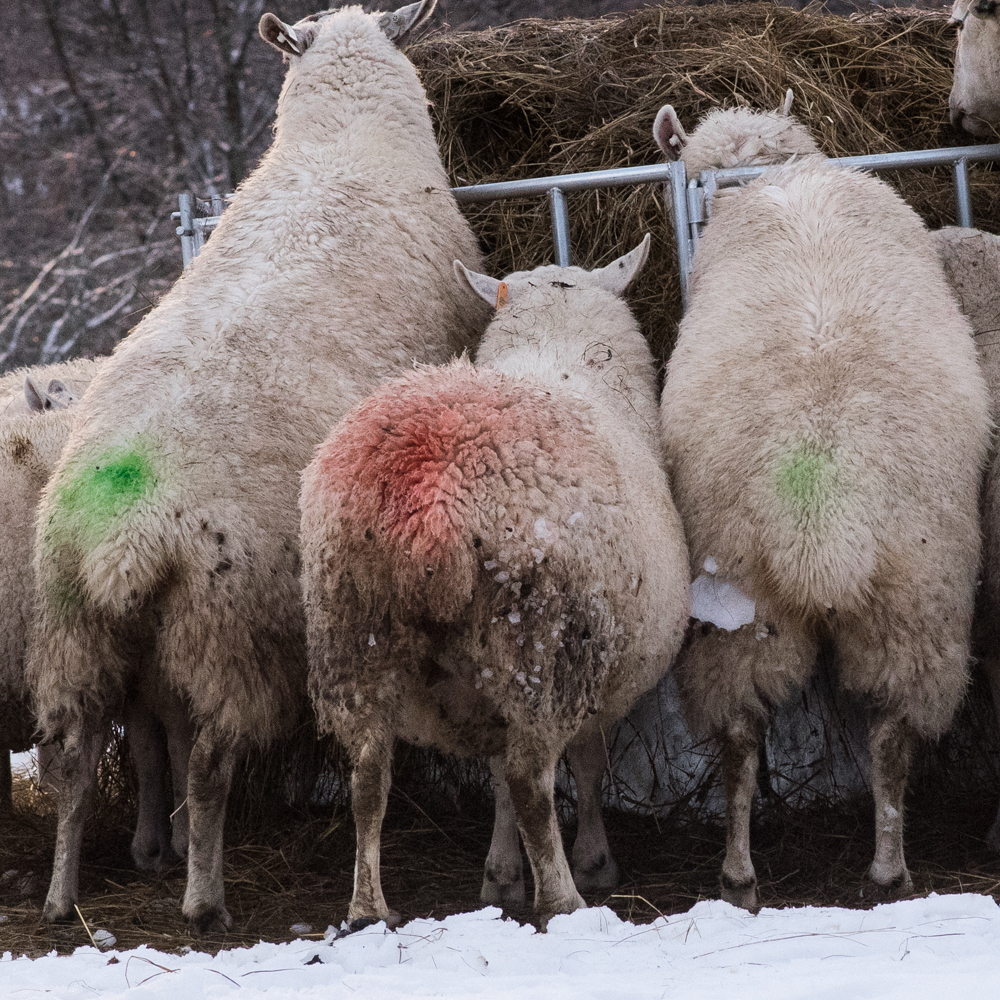 I’ve lost track of how many people have told me since last winter that sheep don’t need liquid water to drink if there’s snow on the ground.  I’ve mostly taken this as fact, and permission to be lazy in my water-carrying obligations, but I recently asked Bill (again) if it was really true.  He said he was pretty sure it was, but suggested I do the experiment — provide water while there was snow cover and see what the sheep do.  Tuesday was above freezing for most of the day, so I took the opportunity to test the Snow Hypothesis. 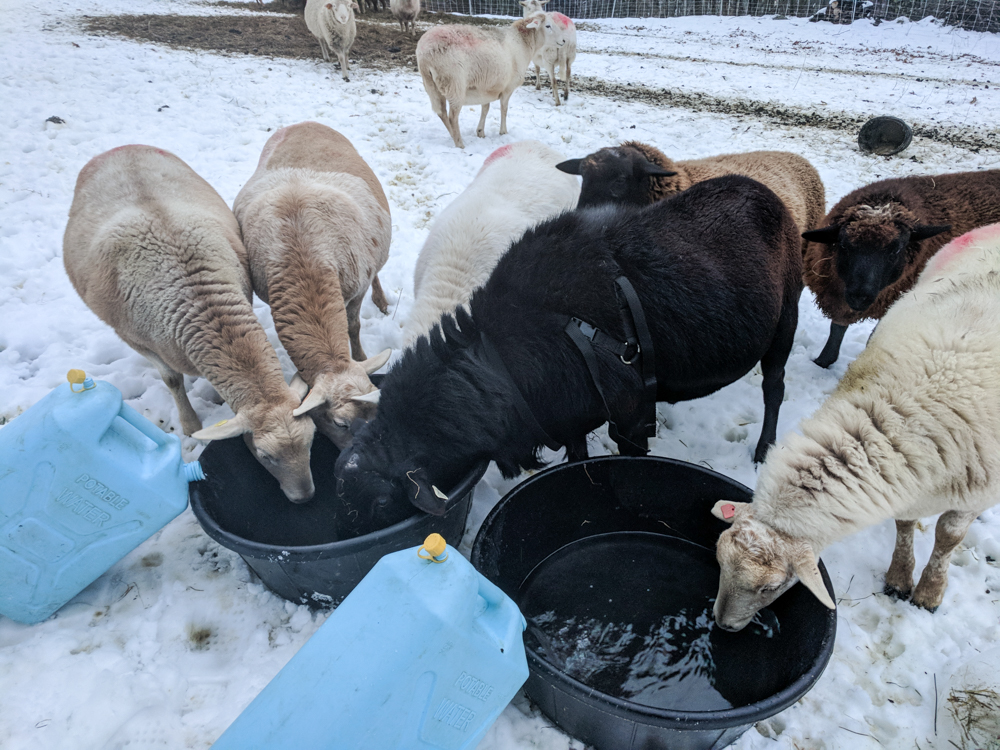 The lambs and the cheviots were indifferent, but the dorset-katahdin group mobbed the water even as I was still pouring from the jerry cans (they’re usually very skittish about getting splashed).  This seemed like a bad sign for the Hypothesis, but I told myself that sheep are usually interested in anything I bring with me, even rocks and sticks.  Perhaps they were just drawn to the novelty. 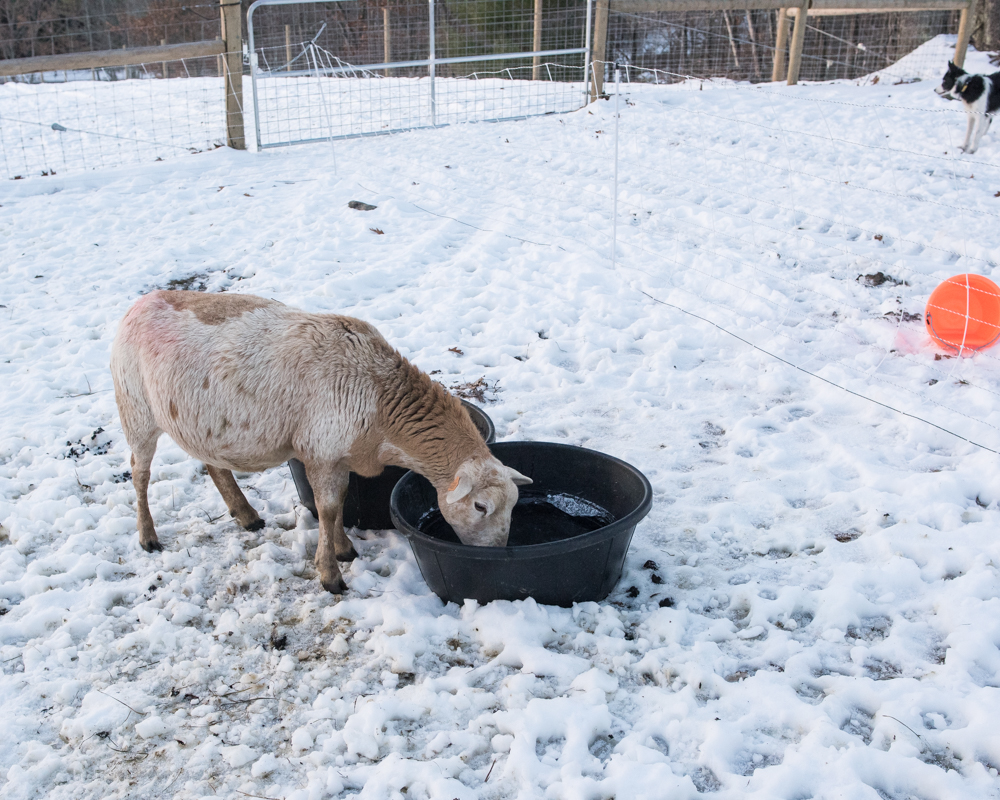 The next morning, one of the katahdins was still excited about the water, and both tubs were well depleted.  I wouldn’t claim that she thanked me, but she did seem to signal her appreciation. 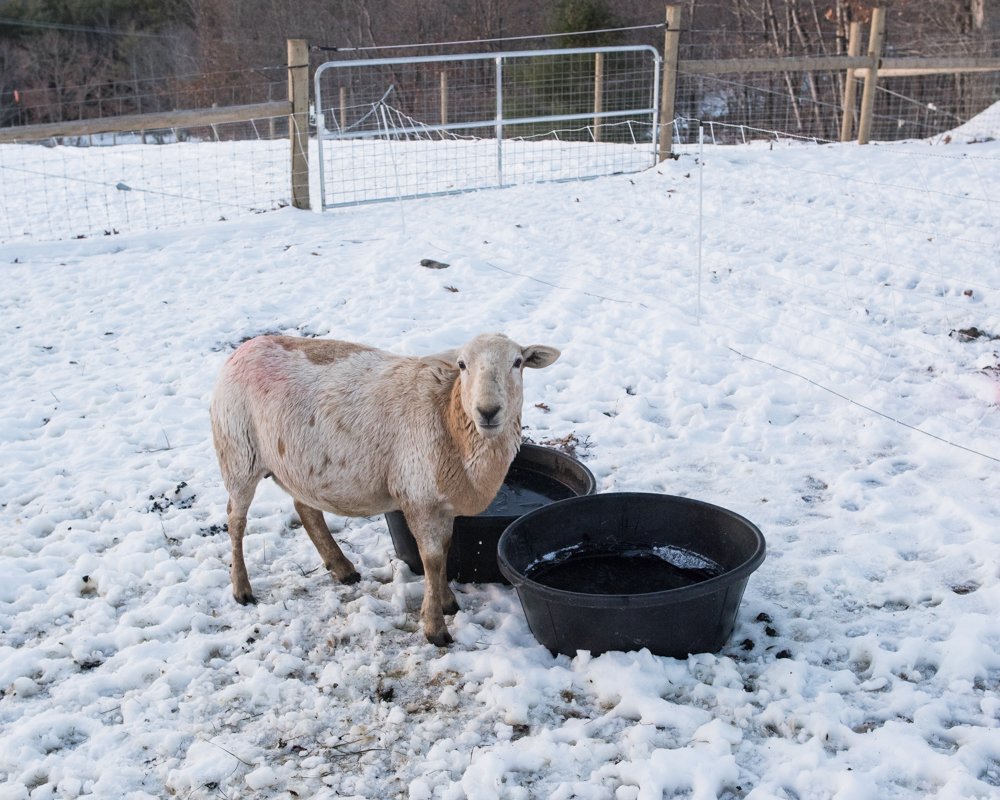 So we seem to have at least a partial repudiation of the Hypothesis; the other two groups didn’t touch the water I put out, but the dorsets and katahdins make a convincing argument that they want something more than snow.  We’re supposed to get up to a foot of fresh stuff tomorrow, so I plan to repeat the experiment while the sheep have access to fresh snow, but it looks like I’m not off the water-carrying hook. 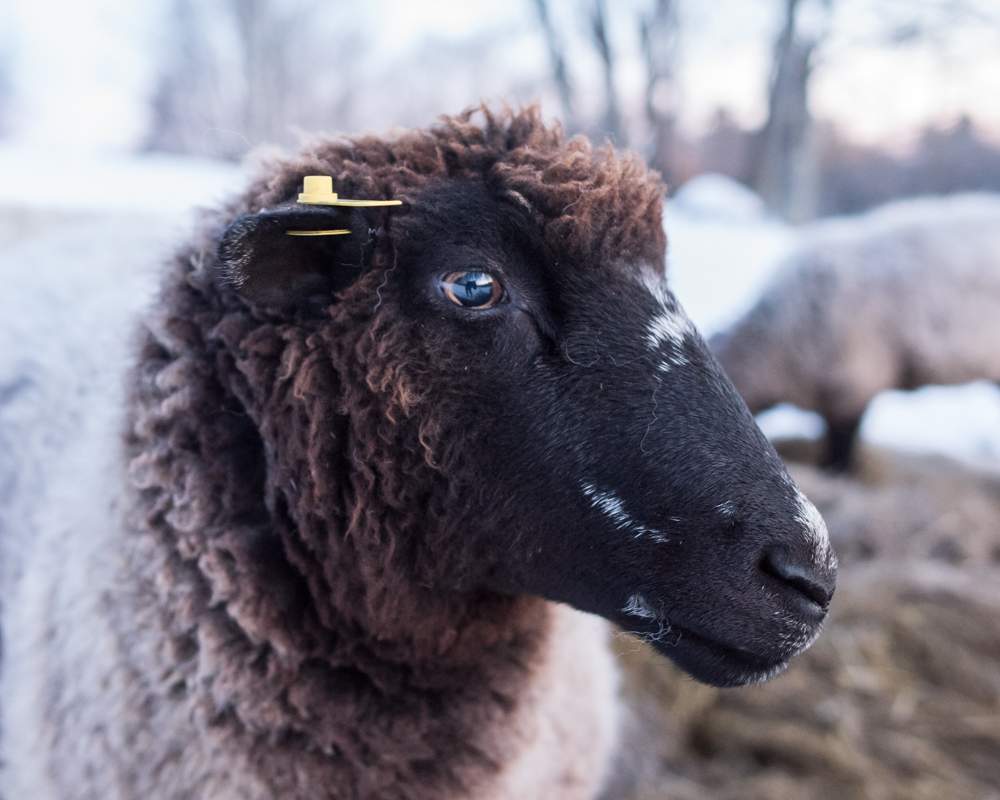 The lambs are starting to look more sheep-like and less lamb-like. 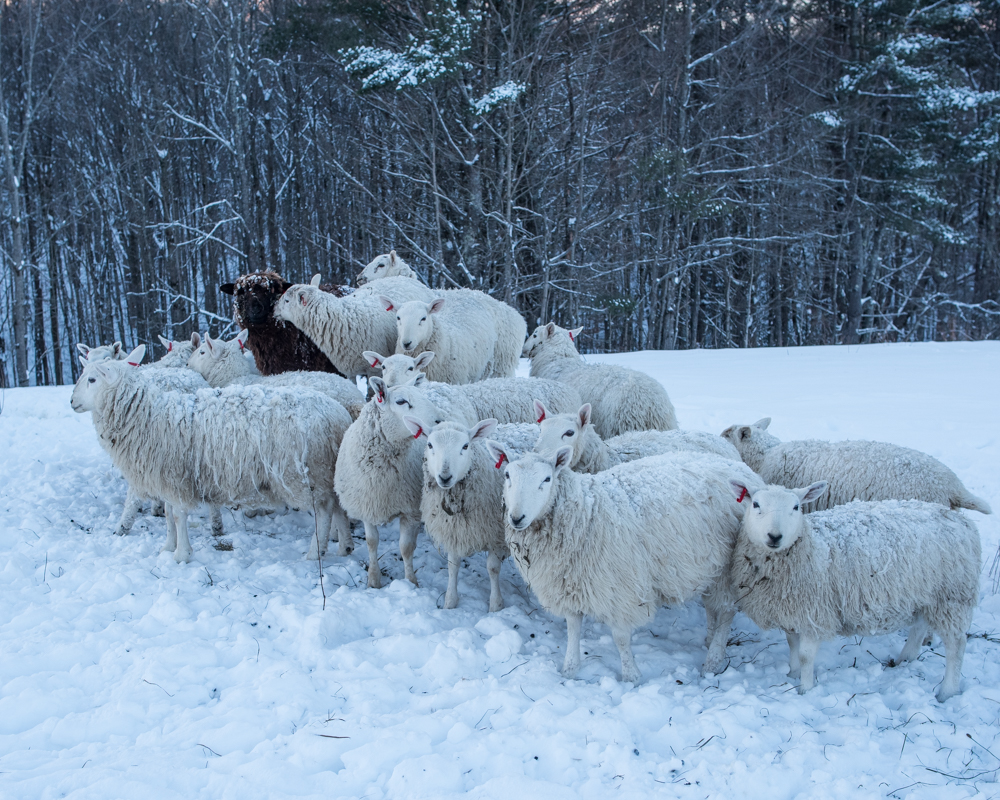 But they still take any opportunity to climb above their peers.

Apologies in advance to squeamish readers — today’s post probably isn’t going to work for you.  As I’m getting ready to start breeding for next year’s lambs (Bill and I will be setting up breeding groups on Saturday), I’ve been thinking back on this year’s lambing, the things that went well and those that didn’t.  The low point of spring lambing was the surprise snowstorm in the middle of May when I lost three lambs to hypothermia; two had already died when I went out to check in the morning, but I haven’t written about my efforts to save the third.

The day before the storm, one of the Dorper-Cheviots had given birth to triplets, but the third one was born enough later than the other two that the ewe rejected it.  I tried to restrain the ewe so that she’d allow the third lamb to nurse, but between her antipathy and competition from the other 2 (stronger) lambs, #3 was losing ground.  When the katahdin ewe lost her twins in the snowstorm, I decided to try grafting the rejected triplet onto the newly lambless ewe.  It seems like a perfect fit — a disconsolate ewe with tons of milk and a hungry lamb rejected by its mother — but there’s always a catch.  Sheep have evolved to take very good care of their own lambs and reject the offspring of others, an adaptation to ensure that their resources (milk) support the survival of their kin and are not hijacked by unrelated animals.  Ewes primarily confirm the identity of their own lambs by smell, so the trick to convincing a ewe to adopt another’s lamb is to make it smell like her own.

In a perfect world, the adopting mother would have just given birth; the shepherd could rub some of the birth fluid on the orphaned lamb, the ewe would confirm that the smell was right, and allow the orphan to nurse.  Once nursing, the adoptive mother’s milk makes the orphan smell more “right”, the bond strengthens, and the lamb thrives.  In a less-perfect world, the easy trickery doesn’t happen, and this is where things get weird.  There’s a long tradition of disguising the orphaned lamb in the skin of the deceased one in an effort to create a more convincing deception.  I had read about this technique and was certain I’d never try such a thing, but a starving hypothermic lamb is a powerful motivator.  It turns out that my friend Mark used to work for a taxidermist and felt confident he could skin one of the the frozen lambs, so we decided to give it a shot. 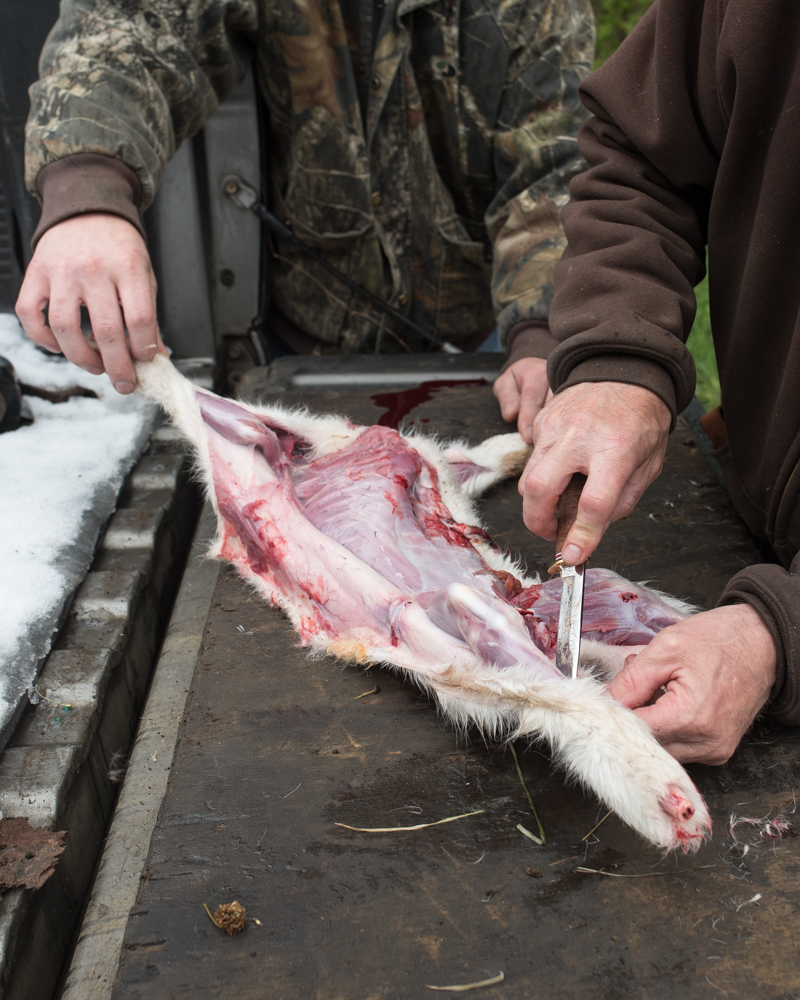 I did my best to dress the orphan as naturally as possible, 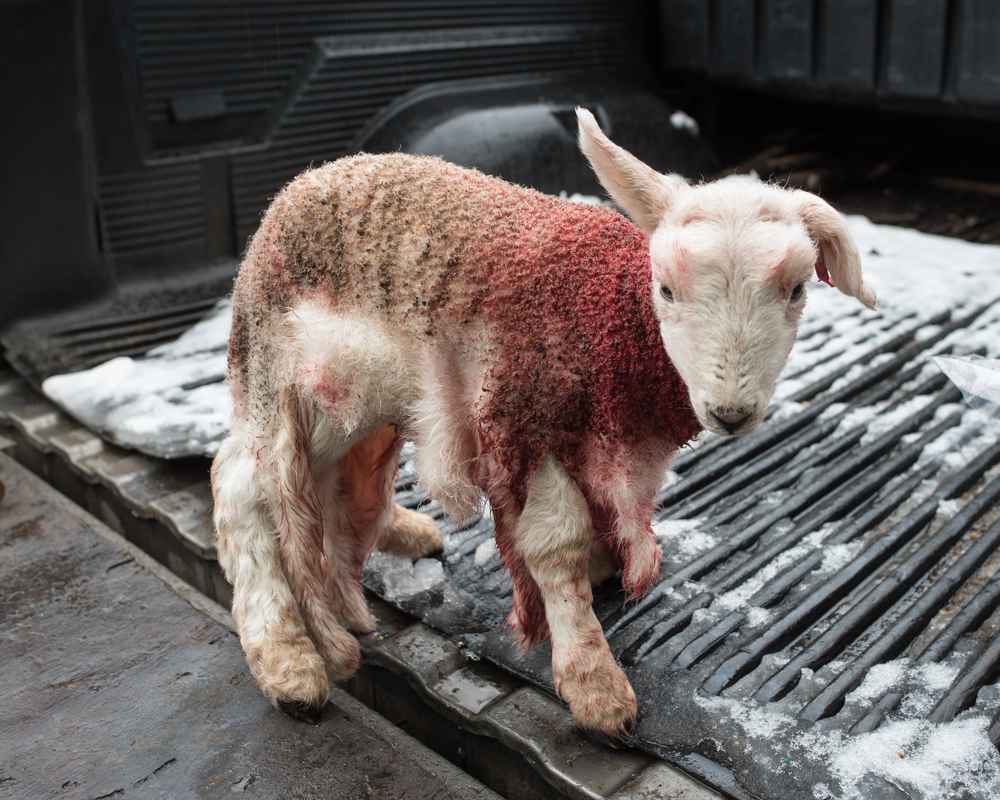 and introduced him to the lambless ewe. 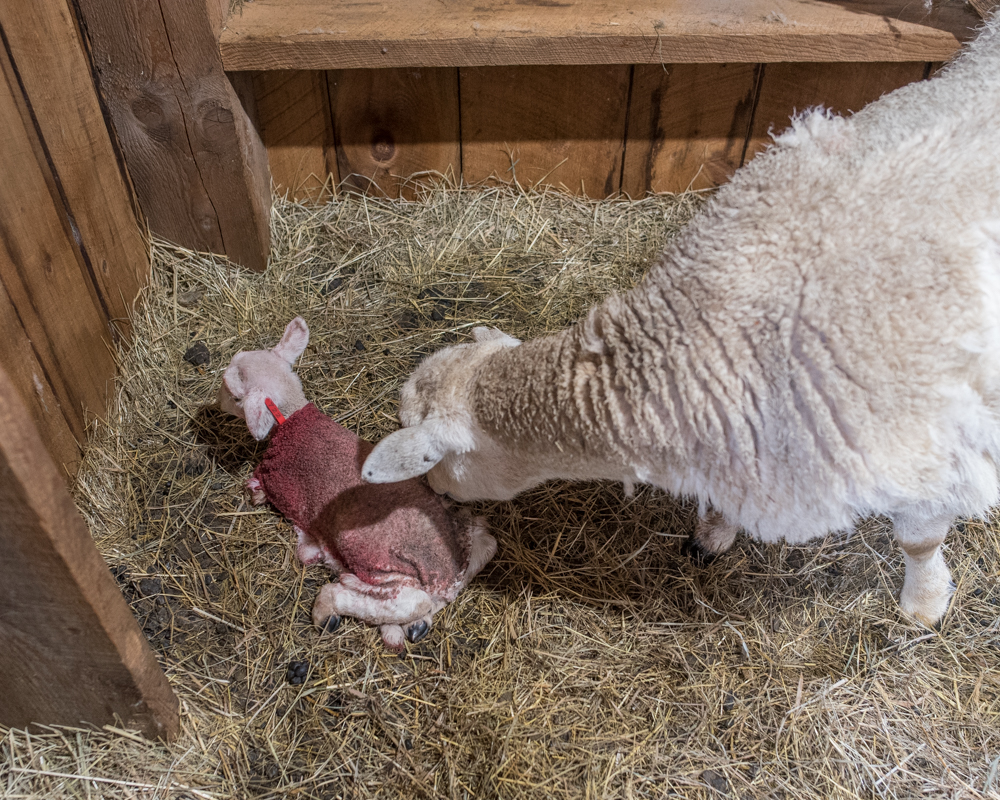 I was shocked that the fraud seemed to be working, as the ewe did not immediately reject the lamb.  In different circumstances, the ruse might have actually worked.  In this case, I was never able to get the lamb warm enough to start digesting food again, despite spending hours heating him gently with a hair dryer.  By the next morning, he had also died of hypothermia.

As I think back on that weekend of snow and dead lambs, it feels like a distant hallucination rather than something I was intimately involved in 6 months ago.  I spent many days afterwards reviewing and second-guessing the decisions I made those 2 days, trying to convince myself both that I could have saved all the lambs and that there was nothing I could have done to change the outcome.  I tried to write about my efforts on behalf of the orphan in the days after he died, but it felt too raw at the time.  With the cycle starting again, the story feels like a useful antidote to romantic notions of farming.

Some days I have nothing more to offer than a gratuitous sunrise.

My water problem got temporarily solved by yesterday’s snow. 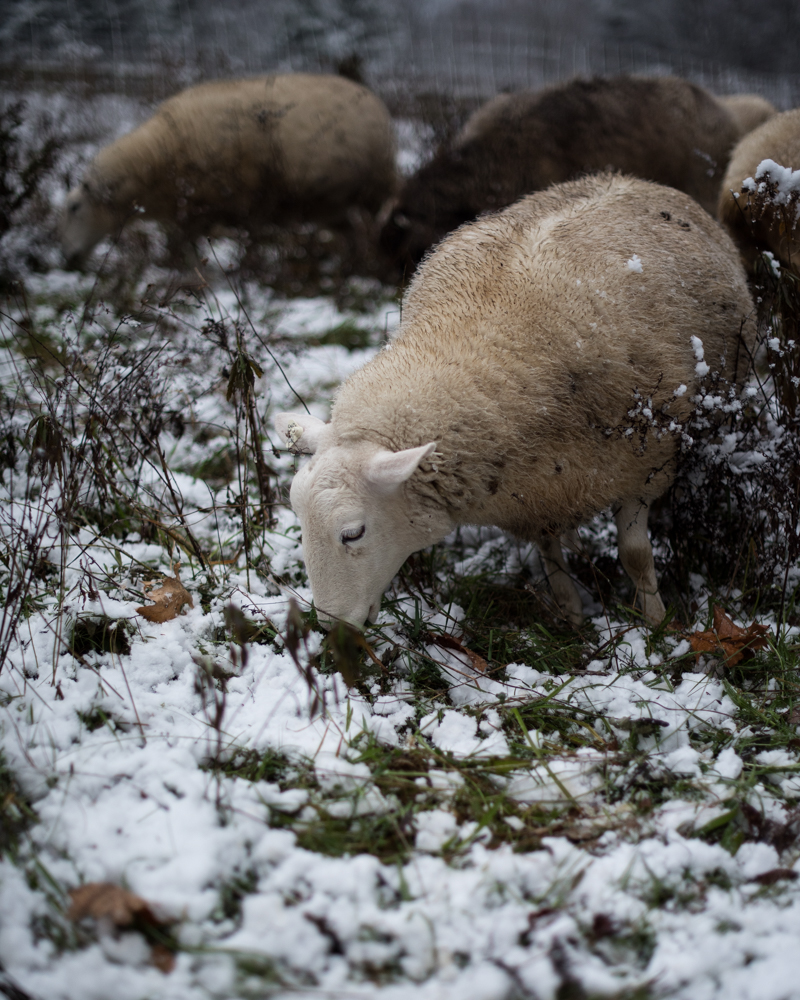 The sheep will happily eat snow to meet their hydration needs, so I don’t need to haul water to refill their drinking station.  The flip side — there’s always a flip side, eh? — is that the grass disappears and I no longer have much idea how the grazing is going.  It’s harder to tell how much the flock has eaten, so I’m not sure when to move them, and I lose my ability to gauge the size of their next grazing rotation.  I’ve gotten to the point where I can usually look at a section of pasture and know how big I need to make the electronet enclosure so the sheep will have half a day of forage.  But now with snow-induced amnesia, I’m trying in vain to remember what the grass looked like (despite staring at it for hours every day…), and my estimating abilities diminish considerably. All I can do is make an educated guess and come back half a day later to see if the sheep look full.

Recently I’ve been feeling like some of this shepherding stuff is falling into place — setting up grazing rotations and moving the flock is starting to feel more intuitive, and all of the deworming went pretty smoothly yesterday, despite the fact that the deworming medication kept freezing in the drench gun.  But this is the latest evidence that I don’t have it all figured out: 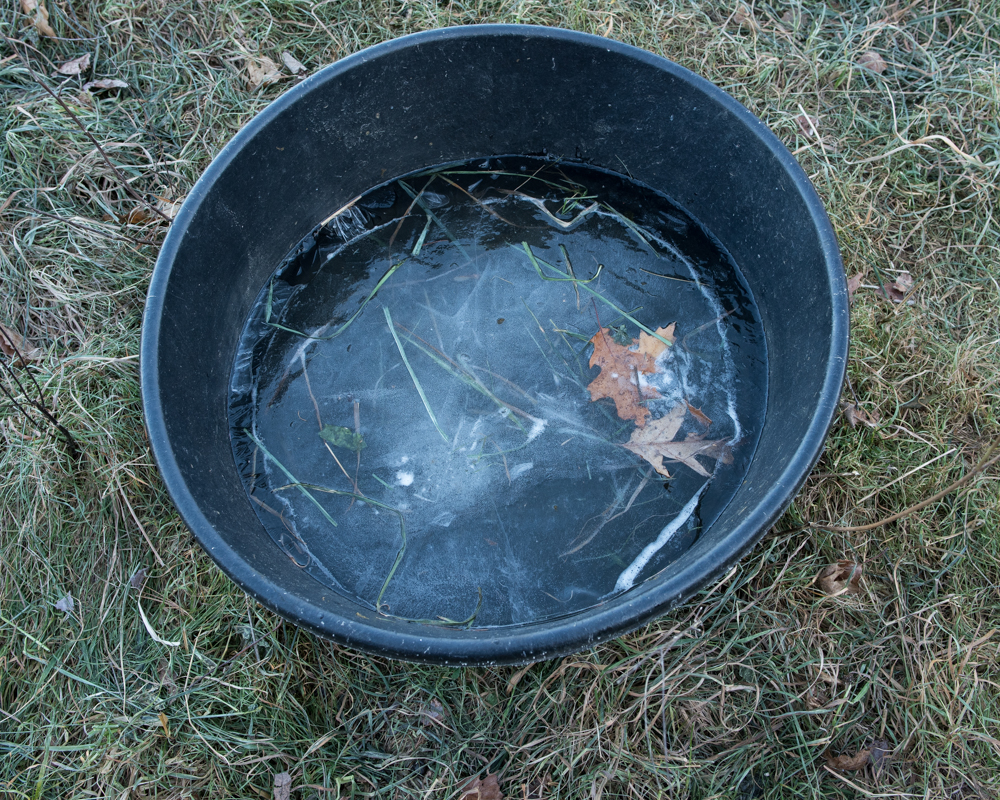 We’re in the midst of a cold snap (14°F early todat), and all of the sheep water was frozen solid this morning, along with all of my hoses and supply tanks.  During a proper winter, there’s snow on the ground that the sheep will happily nibble for hydration, but today’s weather reminded me that cold dry weather is also a reality I have to reckon with.  I ended up filling 5-gallon jerry cans with hot water in my bathtub and ferrying them to the 3 groups — rams, lambs, and main flock — in the bucket of the tractor.  I’d like to believe there’s a more elegant solution, but it’s eluding me so far.