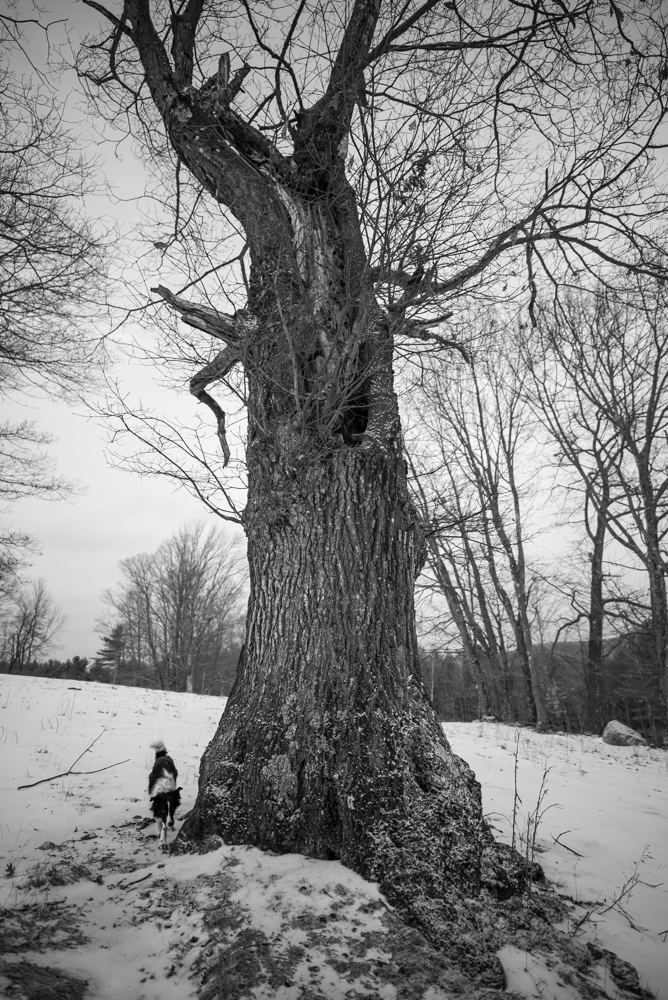 I’m afraid that readers of this space will be subjected to more photos of trees than is reasonable or fair as I learn to properly depict the farm’s namesake.  Apologies.  In other news, the number of sheep on the farm stays stubbornly stable.

About a week ago Bill responded to one of my emailed inquiries with “You have some very unusual problems.”  I don’t think he was complimenting me for creative thinking.  In that case, I had sent him some photos of a sheep which had rubbed all the wool off its neck as it was eating at the bale feeder. 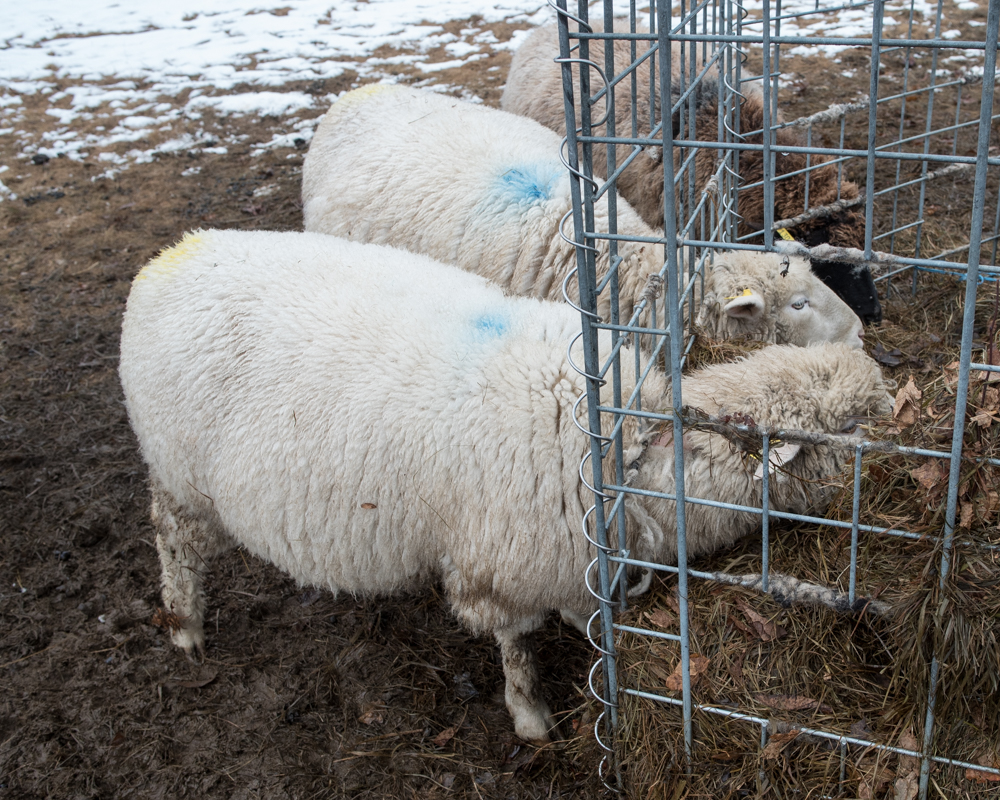 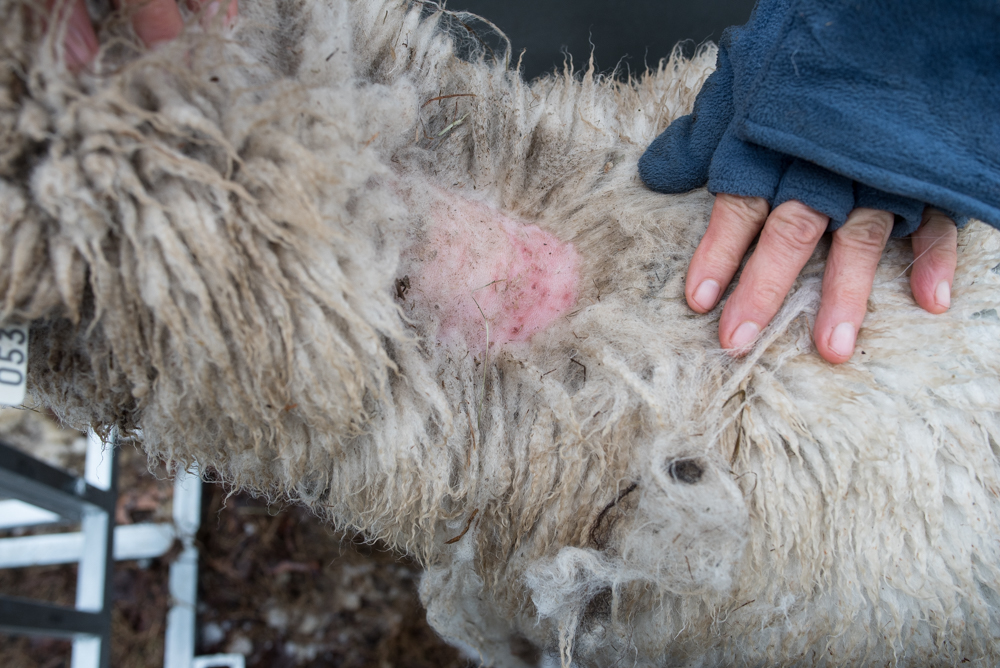 This morning, I called him before most people are awake to ask about the red grapefruit hanging off the back of one of the ewes in the barn.  After a couple of follow-up questions, he thought is was very likely she had suffered a vaginal prolapse overnight and would need immediate attention to prevent more serious problems.  A bit of hurried Googling gave me some understanding of what had happened, and revealed that this is a 1% problem, keeping my streak intact.

Bill assured me that this was relatively easy to address, but that there was no way he could talk me through it over the phone.  After he arrived at the farm, he guided me through manually correcting the prolapse (if every there was a euphemism…), and then we fitted her with a prolapse truss meant to keep the problem from recurring. 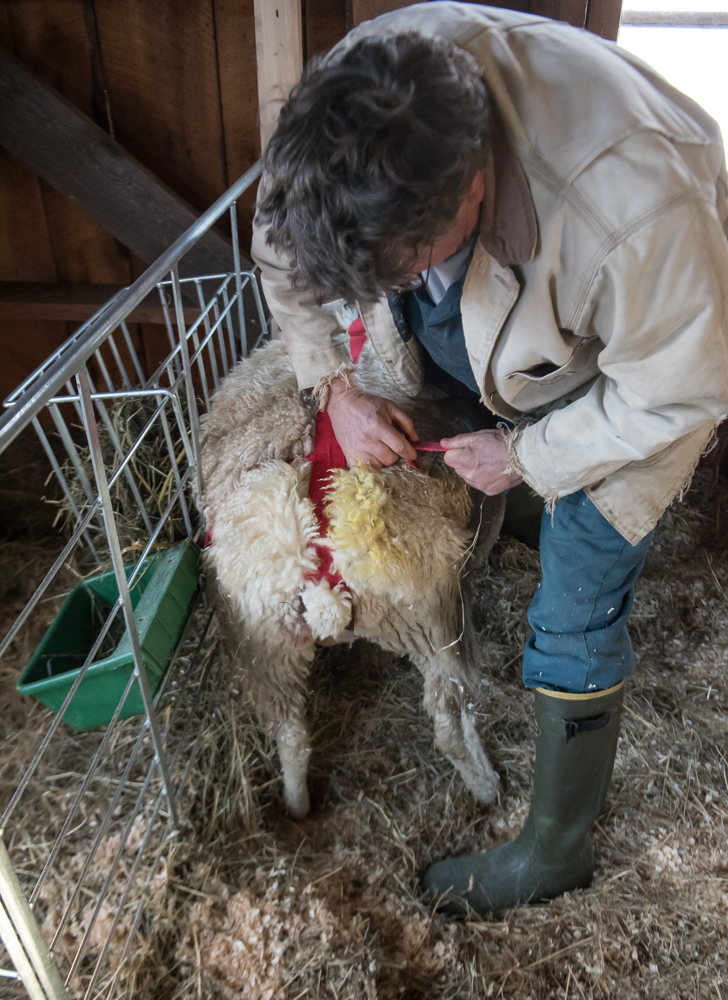 I apologize for missing some of the more descriptive photos, but my hands were otherwise occupied.  And Bill was right — easy procedure, impossible to describe adequately at a distance. 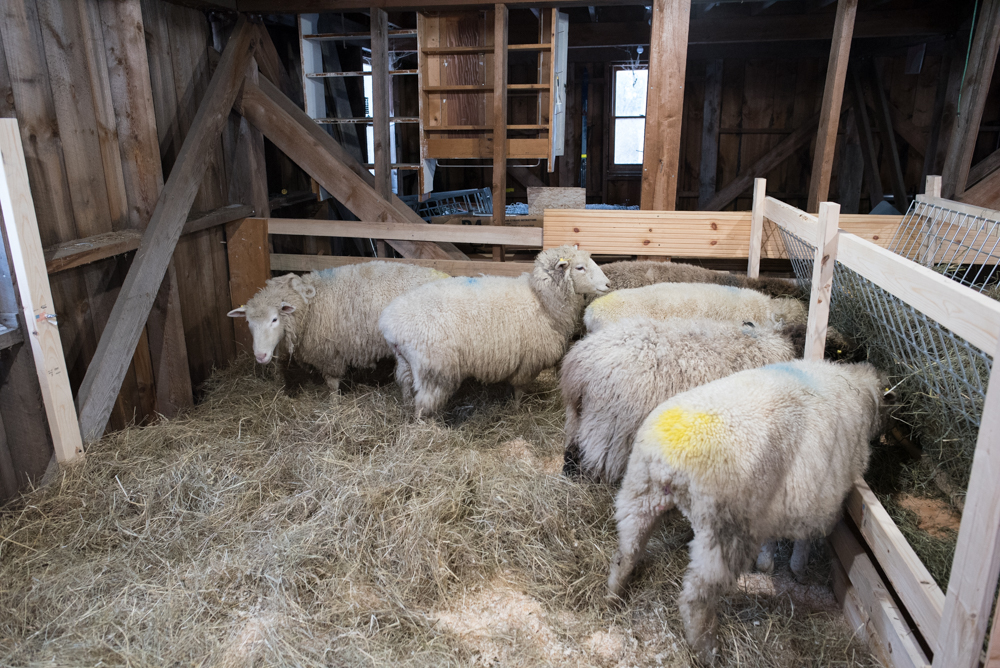 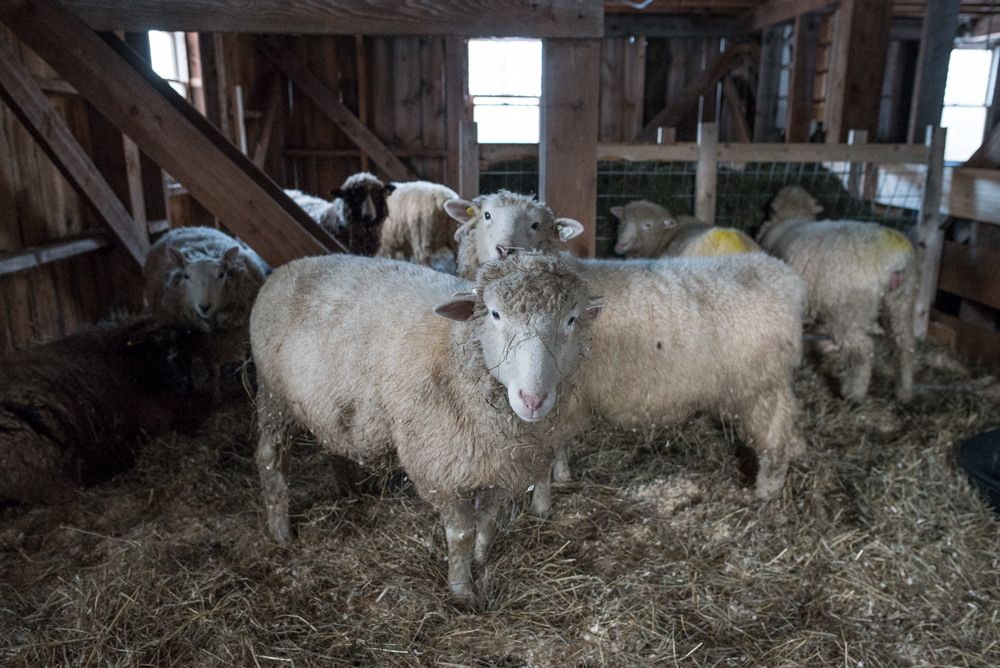 When the sheep first arrived at the farm, they wouldn’t let me get closer than about 50 feet from them before they scattered.  I figured that this was jut what sheep did.  I’ve been sort of aware that they’re much less skittish around me now, but I realized how much had changed on Friday night.  When Edward and Jenny walked into the field with me, the sheep were at the bale feeder, and I thought we might be able to put a halter on the brown ewe as she ate.  Instead, the sheep immediately (two steps into the field!) realized there were unfamiliar people coming and ran from us.

Now that we’ve gotten all the notably-pregnant ewes into the barn, I’ve noticed another shift.  While recently the sheep would allow me to walk near them (as long as I didn’t make eye contact; so much to learn!), now the ones in the barn are actively nuzzling me.  I’d heard that sheep become friendlier to their shepherd as lambing approaches, but the magnitude of the change is stunning.  I suppose it’s a useful trait insofar as I may need to help them with their delivery, but evolution sure is a funny thing.

The sheep seem incredibly relaxed in the barn, with no sign of impending lambing.  The urgency I felt on Friday seems to have been a product of an inexperienced shepherd rather than an impending birth.  We’ll see what the morning brings!

I’m continually amazed by my ability to rationalize away facts that don’t conform to my world view.  Years ago, my apartment was burglarized while I was asleep, and the thieves emptied much of my living room, but I walked through the room 3 or 4 times without noticing anything missing.  Finally, I sat down to eat breakfast and noticed some papers on the table that I had left on a stereo speaker the night before.  I thought this odd, but decided I must have been mistaken about where I left them.  I tried to put them back on the speaker and then noticed that the speaker wasn’t there.  Again, I found it strange that I had moved the speaker without remembering having done it.  Finally, when I noticed the speaker wire sitting on the floor, unattached to speaker or stereo system, that reality began to assert itself.

More recently, I’d convinced myself that there are no mice at Hollow Oak Farm.  I store corn in the barn for the sheep and try to be careful to always keep it in a metal can with a lid, but I’ve been occasionally sloppy with no consequences; ergo:  no mice.  Today as I was finishing up the preparations for lambing in the barn, I saw kernels of corn in a pocket of my tool belt. 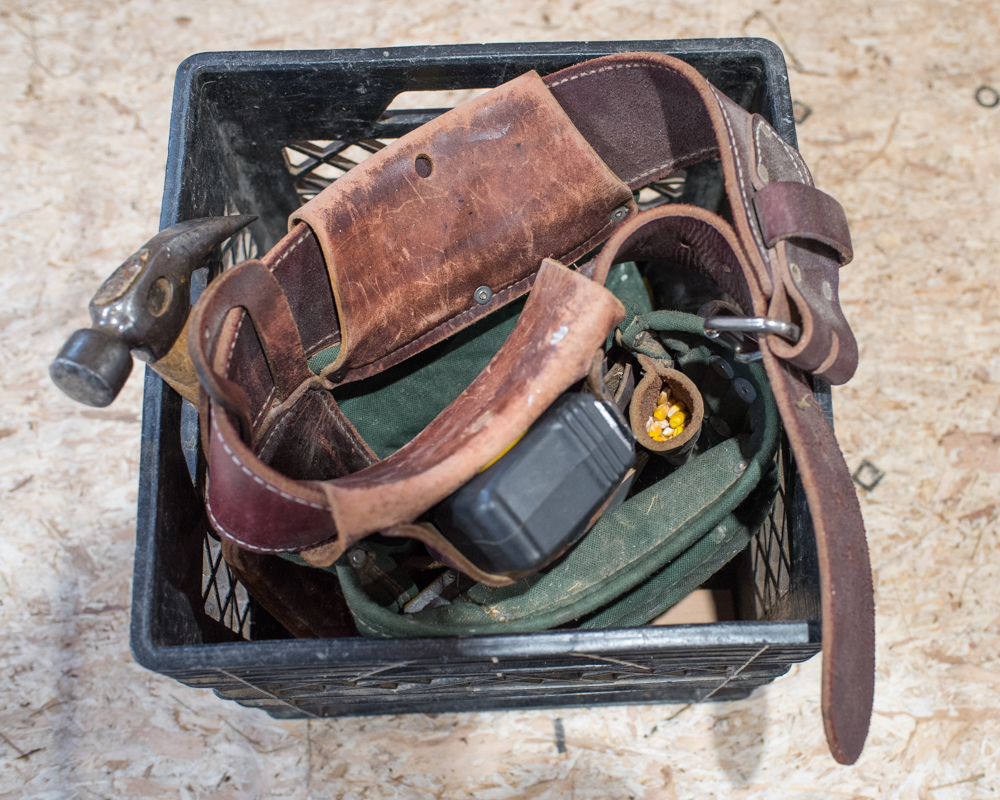 I didn’t remember being sloppy with corn near my tools, but I must have been, right?  I continued to see kernels in odd places and finally went to look at a cup of corn I had left out on a table. 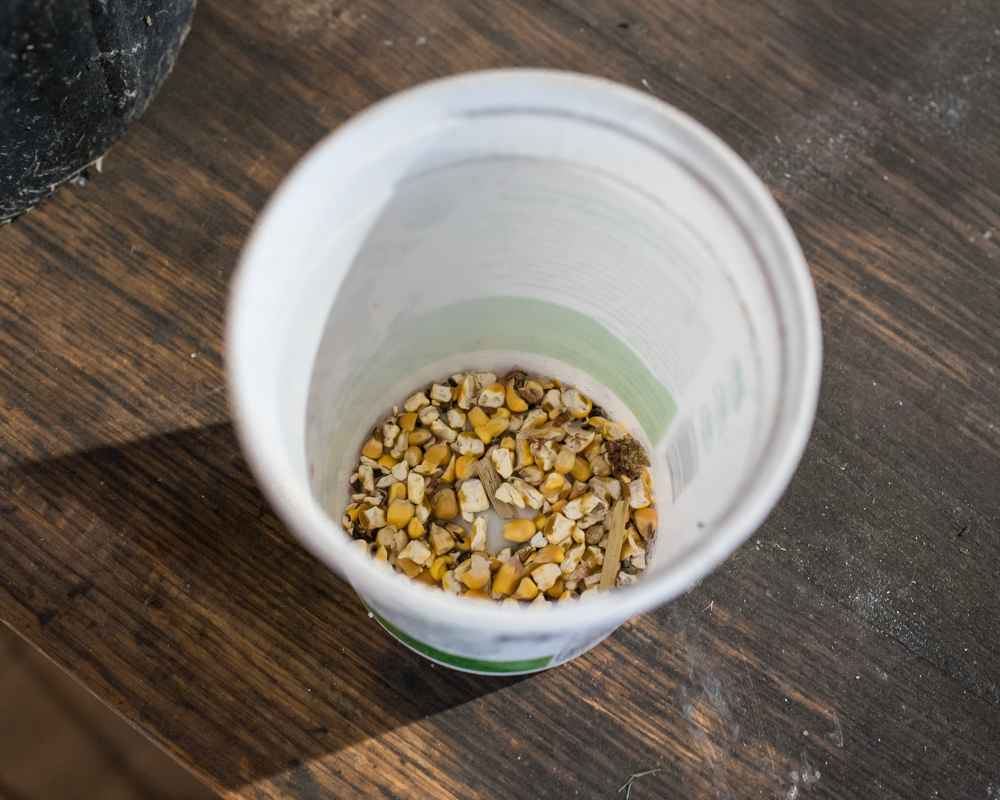 Hmm.  Not only hungry mice (or voles or something small; the droppings I eventually saw were too small for squirrels), but industrious and far-sighted mice caching their riches in case I wised up.

Later in the day, after I filled the wood boiler, I smelled a funny burning odor, not quite wood, but kind of pleasant.  I convinced myself that it was some paper that I had put in earlier — it must not have burned completely before, and when I shifted around the logs, it must have caught again.  I went back to work in the barn, and I was puzzled that that the burning paper still smelled so strongly.  I eventually noticed the smoke and burning embers on my shirt sleeve… 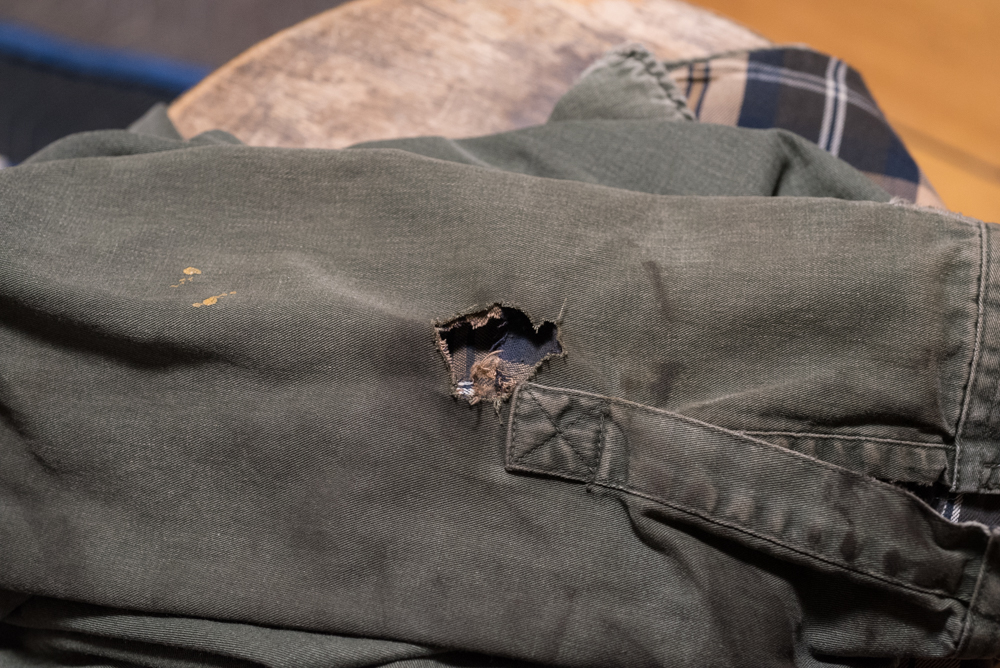 The barn is ready and the brown ewe is in, and she didn’t lamb outside on icy pasture in January.  The longer version of the story includes a breathless call to friend and neighbor Jenny Hughes when I realized (30 minutes after dark) that my plan to move sheep into the barn in the morning might be in conflict with the ewe’s plans to go into labor over night.  Jenny and her husband Edward helped me convince the brown ewe to come in, darkness and ice notwithstanding. 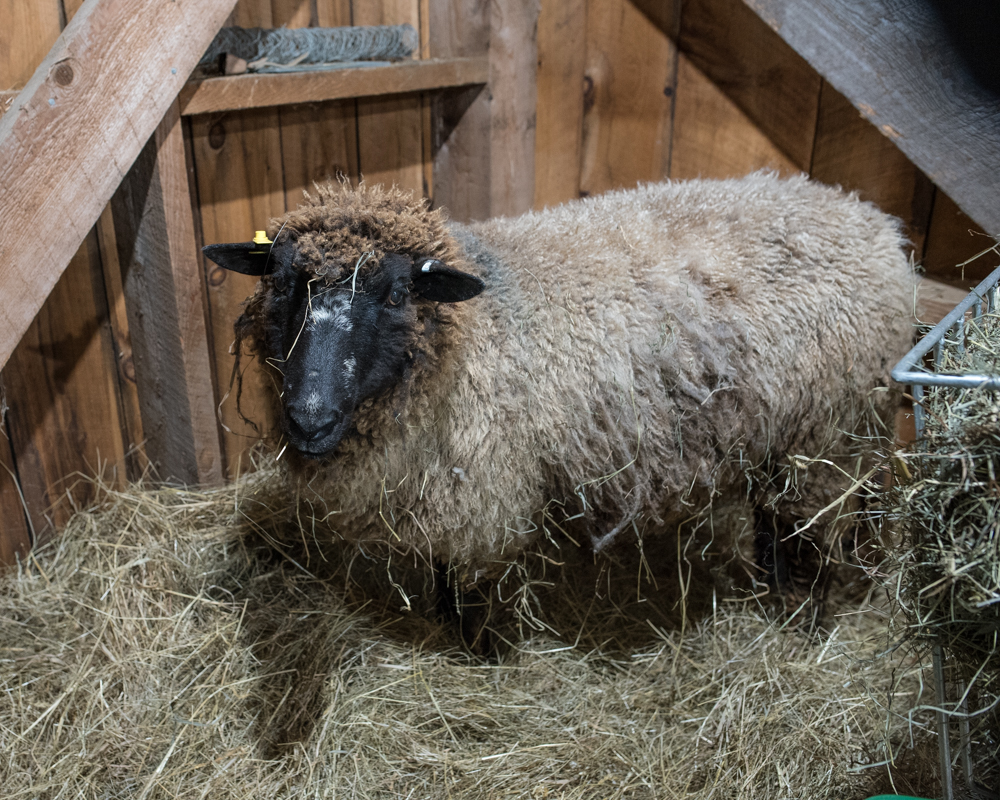 This is the first time I’ve been the primary human responsible during lambing season; not quite knowing what I’m doing puts a bit of an edge on.  I also don’t have good information about when this batch of ewes is due to lamb (Christmas to the end of February was all I got).  Consequently, I’ve been spending a lot of time staring at the back side of a brown ewe, the one who seems farthest along in cooking her lamb(s), in an effort to divine when she might go into labor.  I thought it only fair to share this experience. 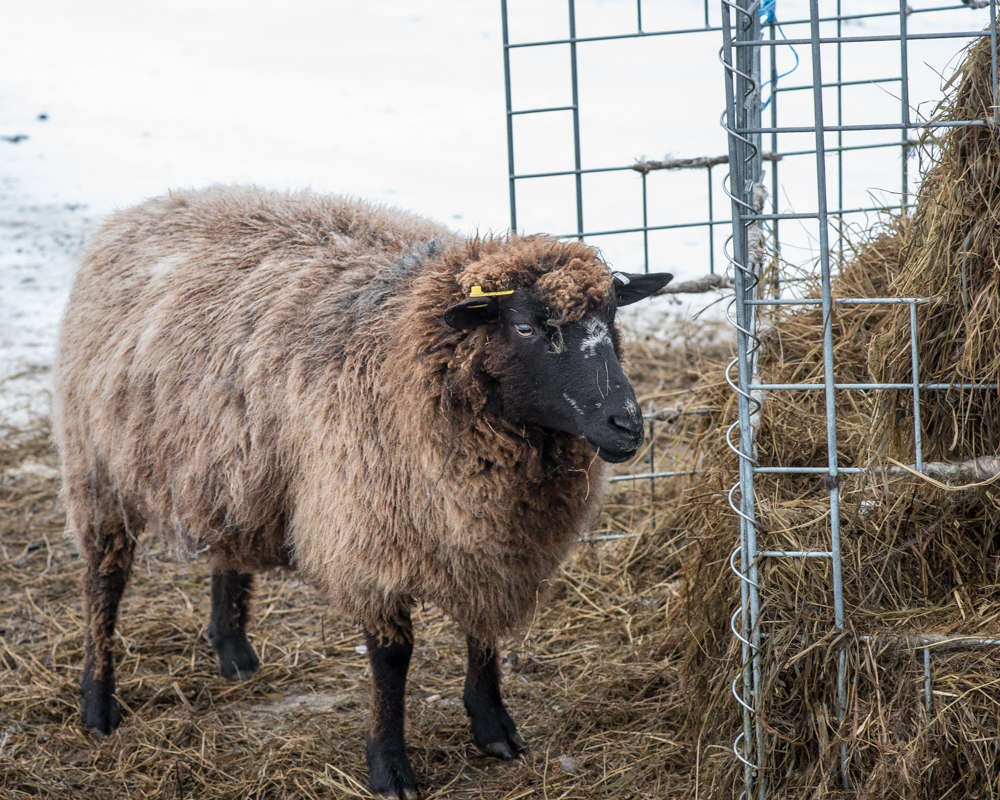 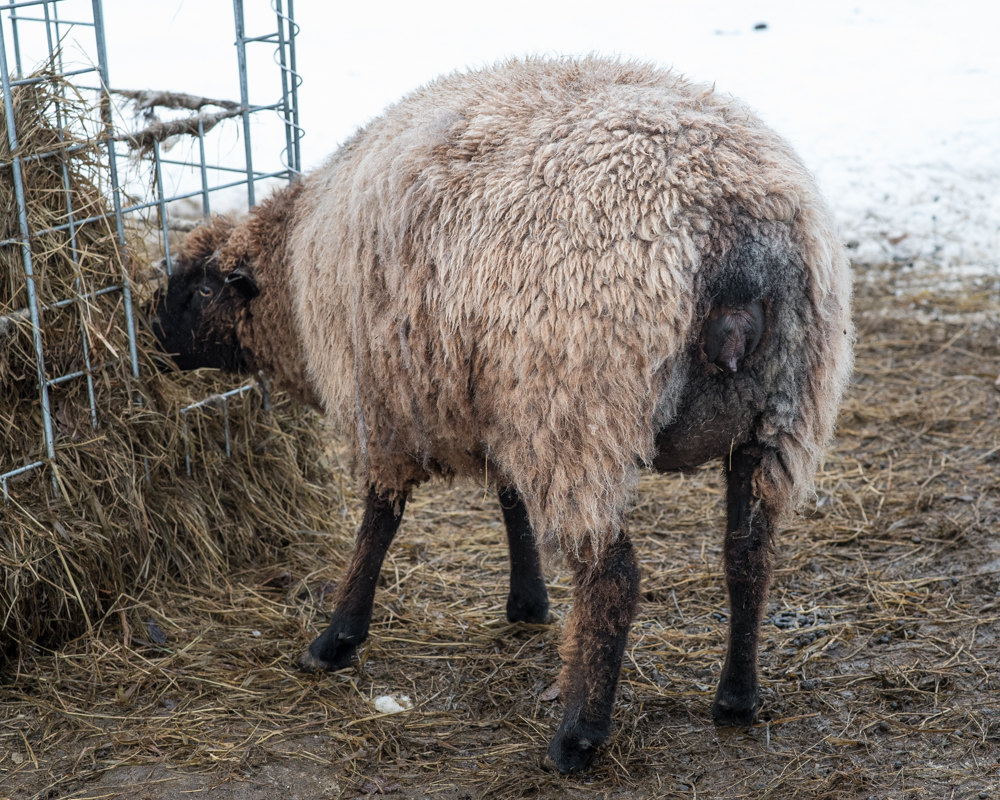 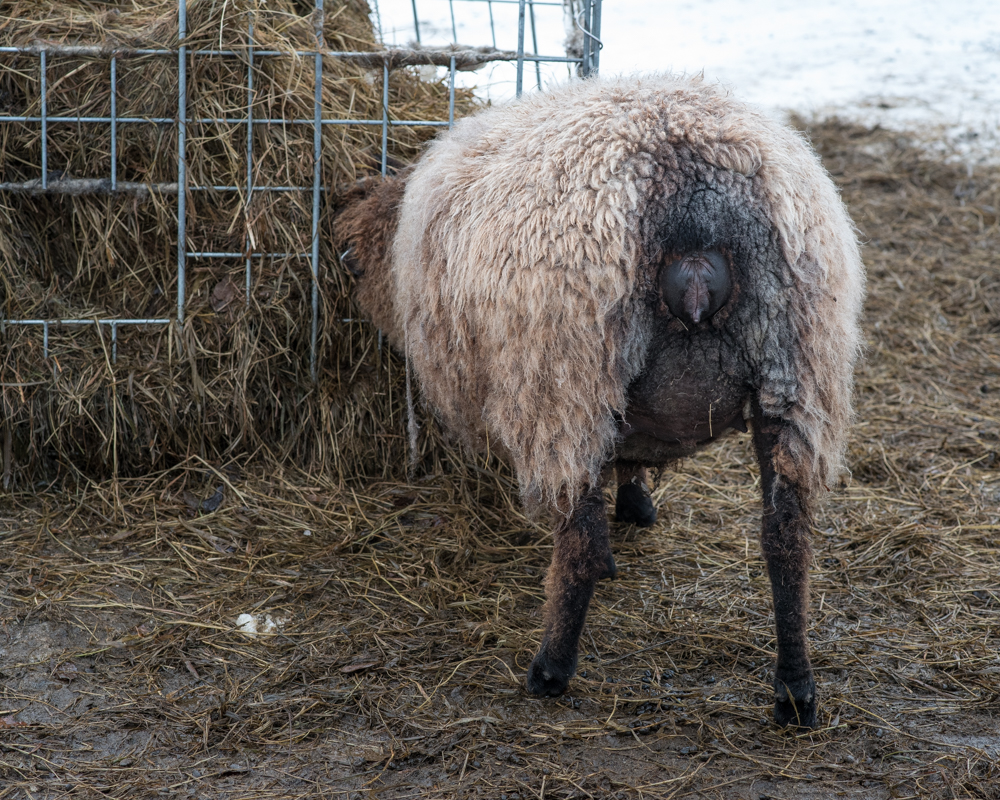 I was moderately worried that she might go today, while I was working in Boston, and spent the day trying not to imagine all the things that might go squirrely in my absence.  I hunted around for her by headlamp this evening, and found her much as she was this morning.  Whew.  Must finish prepping the barn tomorrow!

Today I felt particularly aware of how screwed I’d be without the community of people who are helping me figure out how to do this farming thing.  Some of my ewes are (finally) about to start lambing, and one of the pre-birth tasks is to vaccinate the sheep against a suite of clostridial infections.  The goal is to boost the ewe’s immunity so that she can pass on antibodies in her milk to the newborn lambs.  On its face, it’s a simple process:  gather the sheep, push them into the handling system, inject 2mL of vaccine under the skin of the ones who need it, and let them out the other side.  But with 41 moving parts (38 sheep, a border collie, a maremma, and me) and a handful of very sharp things, I can imagine dozens of ways this could have gone south.  But instead, Bill Fosher was here today, and we were done in less than an hour, no cursing required. 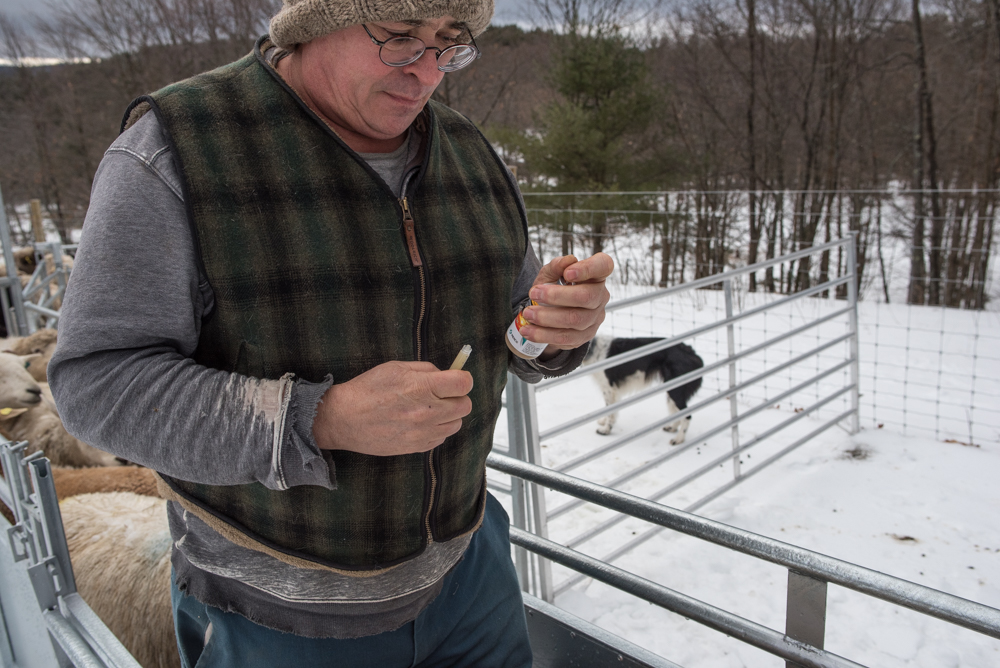 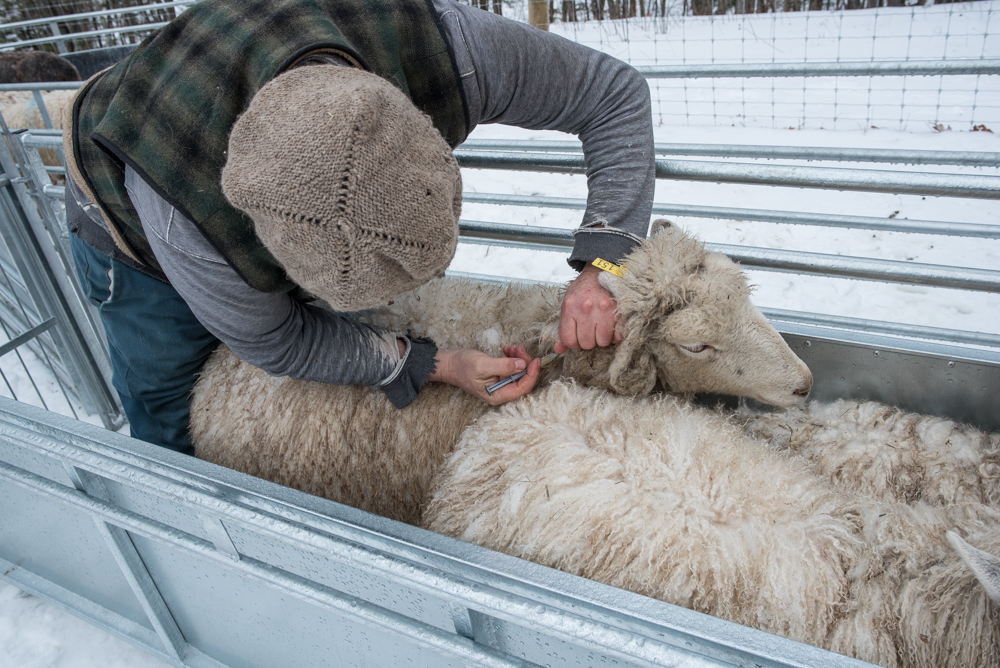 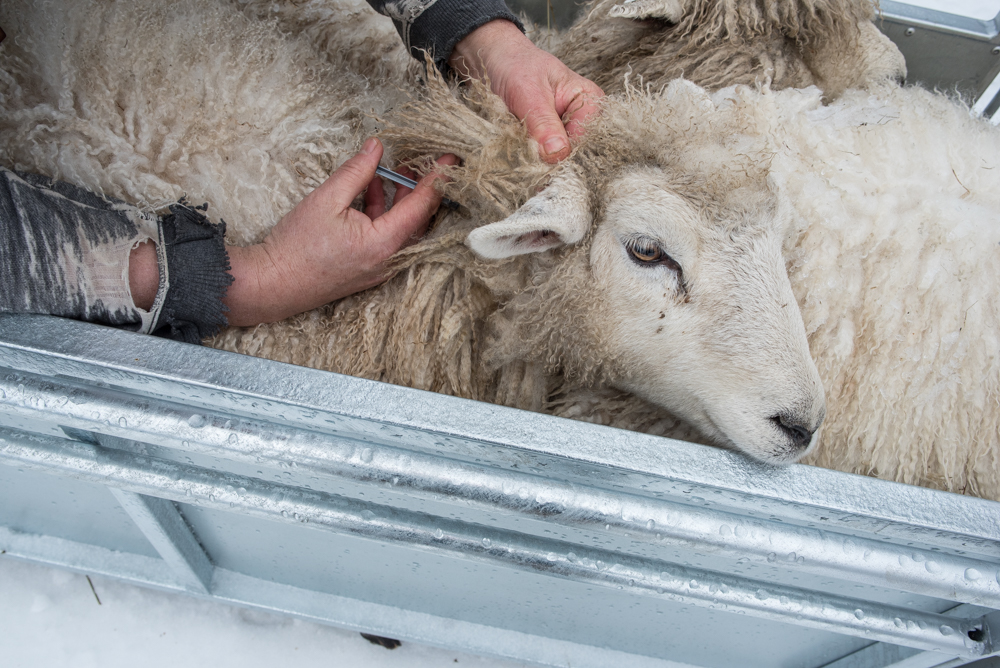 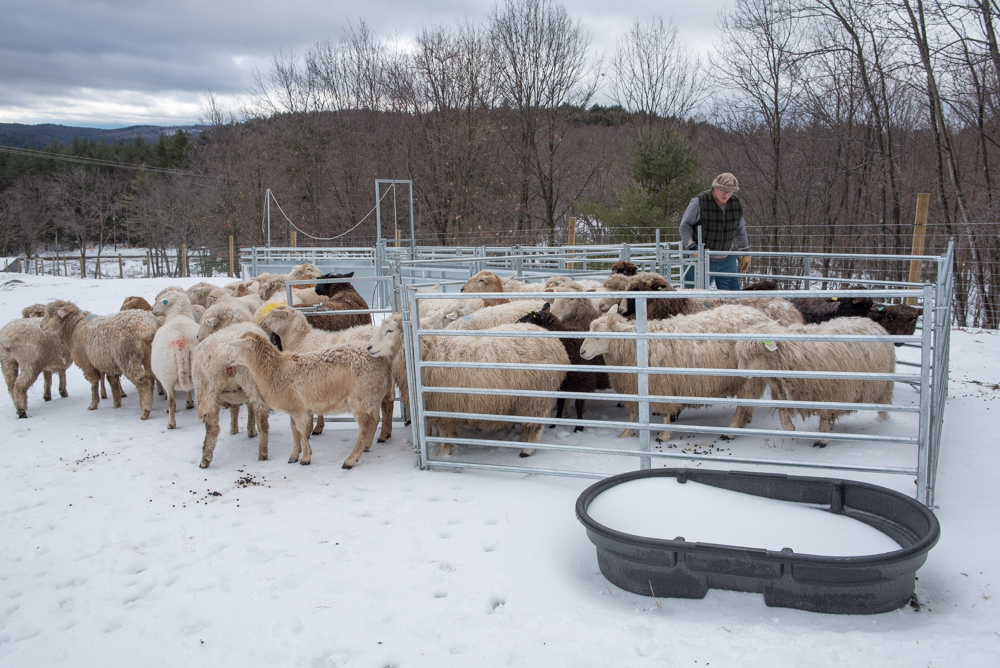 Overnight the sky dropped about four inches of little white ball bearings, and the wind was gusting over 30mph at dawn.  My apologies to anyone who’s tired of weather talk, but there sure is a lot of it here, and it dominates the rhythms on the farm.  The morning squalls made the border collies silly, the sheep a bit slow to get moving down the hill to the bale feeder, and gave the electric fence conniptions. 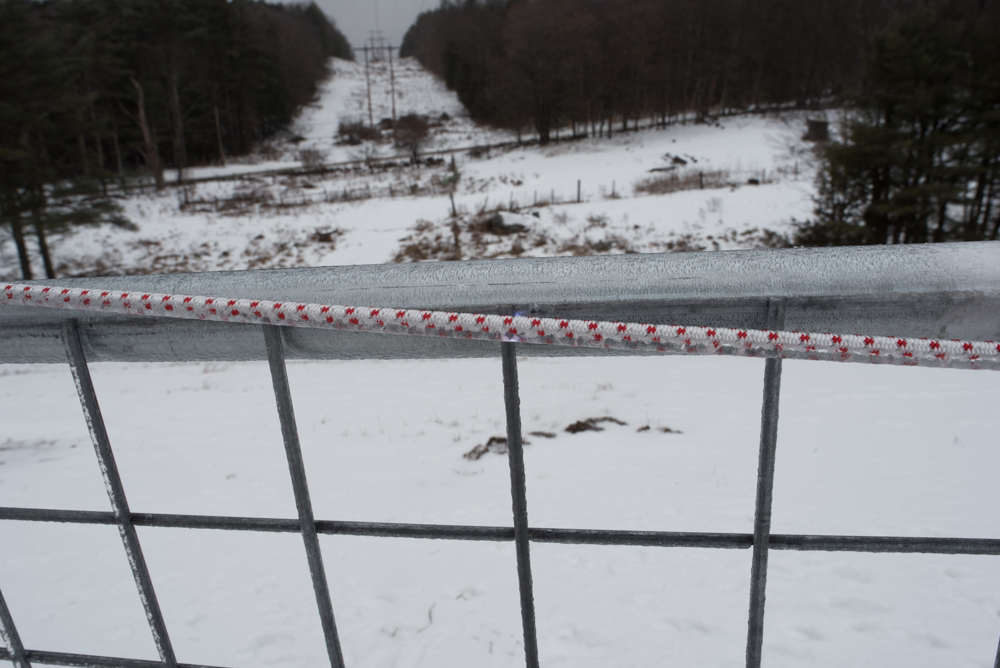 Electrified fencing is one of the primary contributors to my sleeping soundly at night — keeping Bravo and the sheep separate from the neighborhood coyotes — so I’m becoming very sensitized to hints that it might not be working optimally.  This morning, as I was walking along the fenceline of the Winter Fortress, I heard the telltale popping sound of an electrical arc, one of the giveaways that the electrons are not flowing where I asked them to. (Parenthetical rant:  How on earth do people with earbuds pumping loud music into their skulls know if their fence is malfunctioning?  Or if a bear/bus/mean person is coming?)  I slowed down and saw that the wire-wrapped bungie cord that carries juice across the gate was drooping low with a coating of ice, and arcing beautifully every time the wind pushed it into contact with the gate.  I disconnected the bungie for now and made a note to take some slack out of it when I have a moment (ha!). 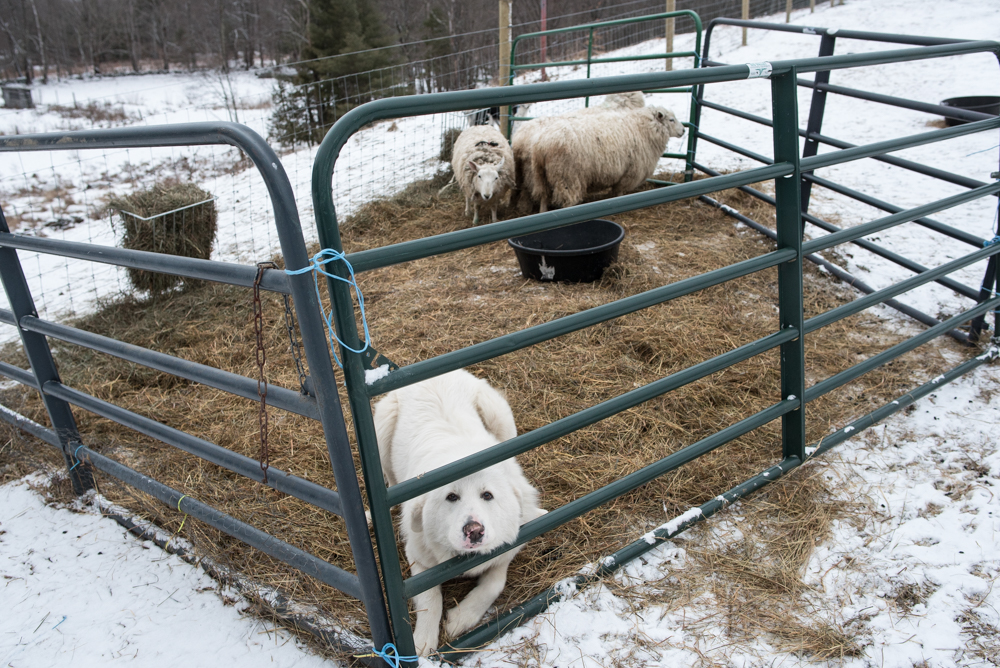 Bravo usually greets me at the bottom gate when I get home, desperate for some human company after a day spent with his sheep.  Today, though, no Bravo.  I looked around and saw him in the pen with the ram and two ewes; Bravo did not seem pleased with his condition.  With apologies to Marc Maron, I’m tempted to start a new blog and call it WTF with Farm Animals.  I have no idea why Bravo was penned with the ram…  He’s certainly capable of jumping the panels forming the pen, but why would he do it in the first place? And then why wouldn’t he jump out again when he was done with whatever lured him in?  We got a light dusting of snow overnight, so I could see that no one had been in the driveway, and there were no footsteps besides mine up to the field.  So WTF?  I suspect this won’t be the last.

Cass and Chloe had a rough day yesterday.  I brought them out to do some herding training, and the sheep were completely uninterested in moving for the dogs. Chloe has a history of being a bit timid around sheep, and Cass is just figuring out her role as a herding dog, so I was worried that their confidence might have taken a serious hit.  I sent an email to Denise Leonard, sheep farmer and masterful trainer of herding dogs, and she offered to come up this afternoon to talk some sense into the sheep.  She also brought her enforcers, Maggie and Emmie, her two most experienced dogs, who are not inclined to take any guff from a sheep.  Denise doesn’t generally take any either. Here’s Cass and Emmie getting the sheep to move rather nicely.  Emmie is not shy about showing the flock her lovely dentition. And then Cass doing it mostly on her own; she’s the black-and-white smudge behind and to the right of the nearer group of sheep (closing fast on me).  It would have been even better if she’d gotten behind the entire group, but I think Emmie might be hiding back there and lending a hand.  We’ll see how the confidence transfers the next time my two have to work on their own…