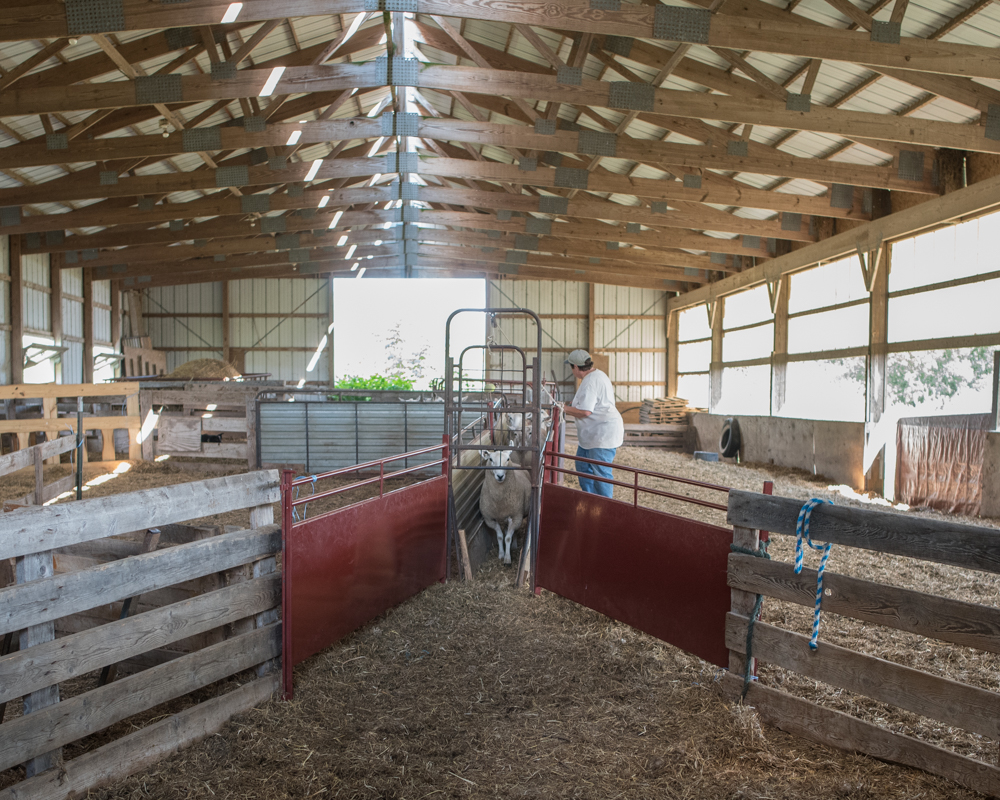 I was in central New York today picking up some new sheep.  Long day and late night, so more tomorrow.

I also noticed that the catalog makes no mention of snakes, which further complicate fence installation. 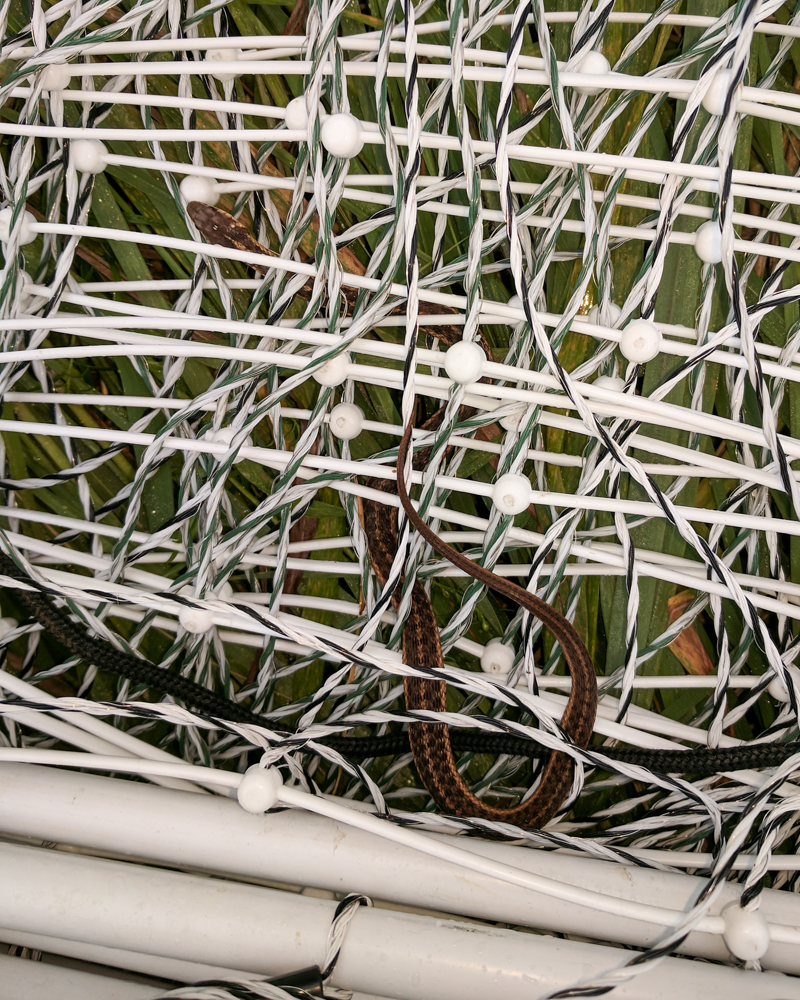 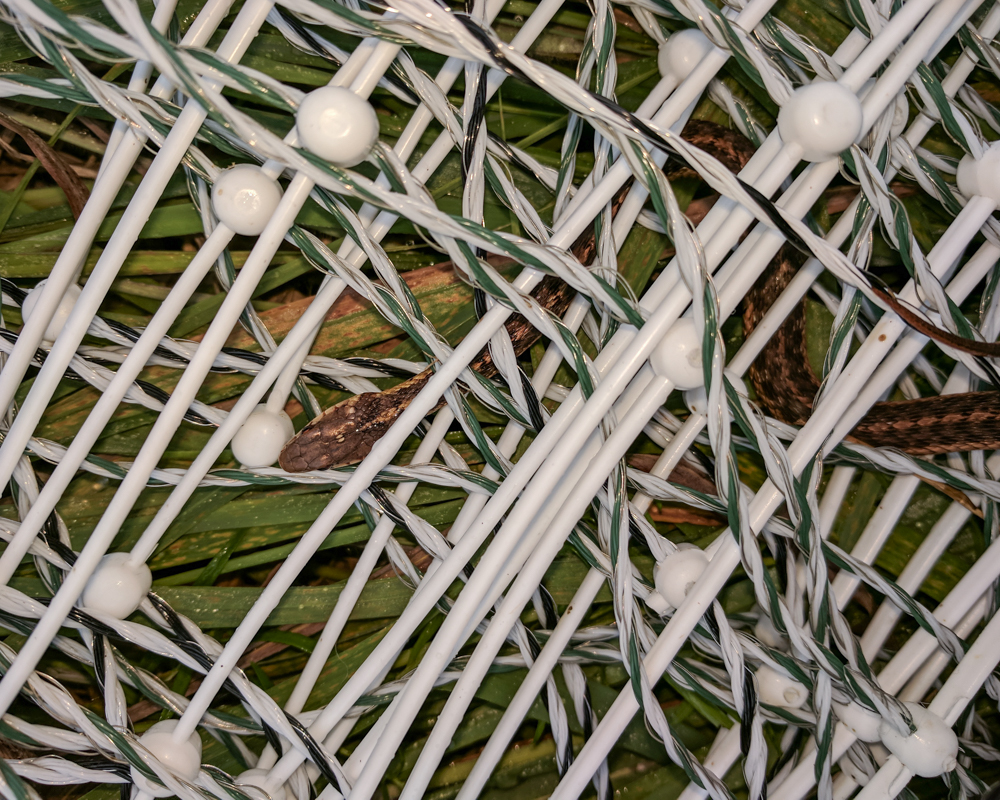 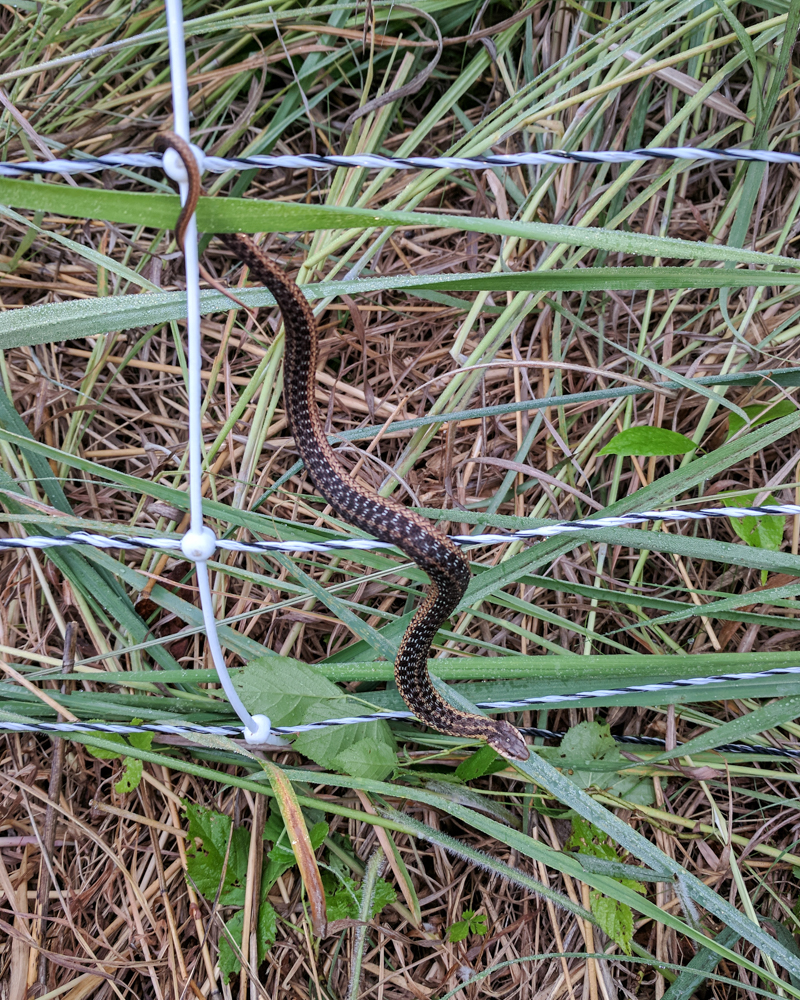 I shouldn’t be surprised at my age that life is never like the photos in the catalogs, but sometimes wishful thinking still gets the better of me.  A company called Premier 1 is the manufacturer of the portable electric fence that I use, and this is one of the photos from their catalog: 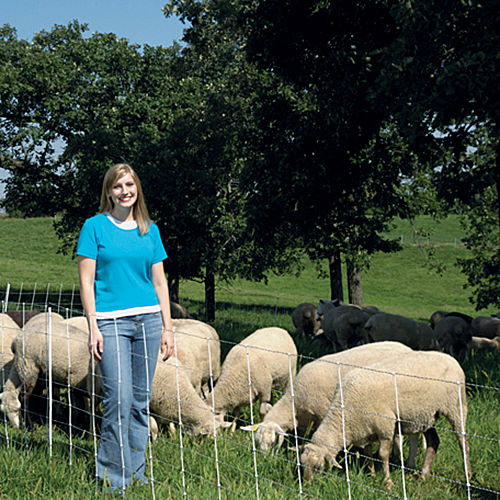 It’s all so neat and civilized.  Here’s my version: 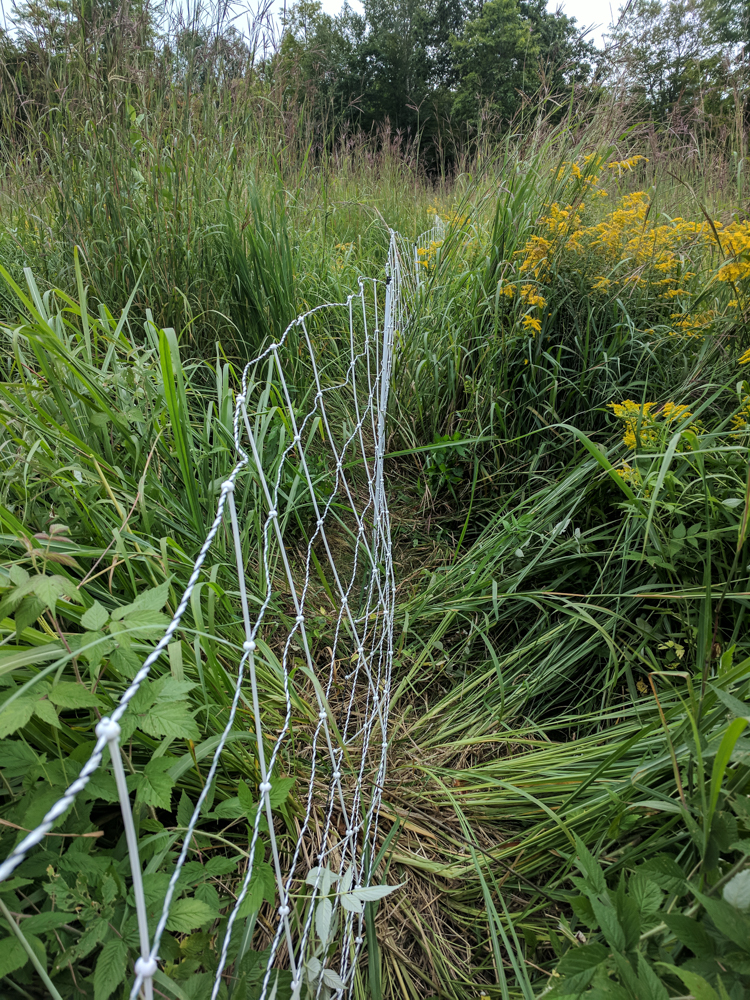 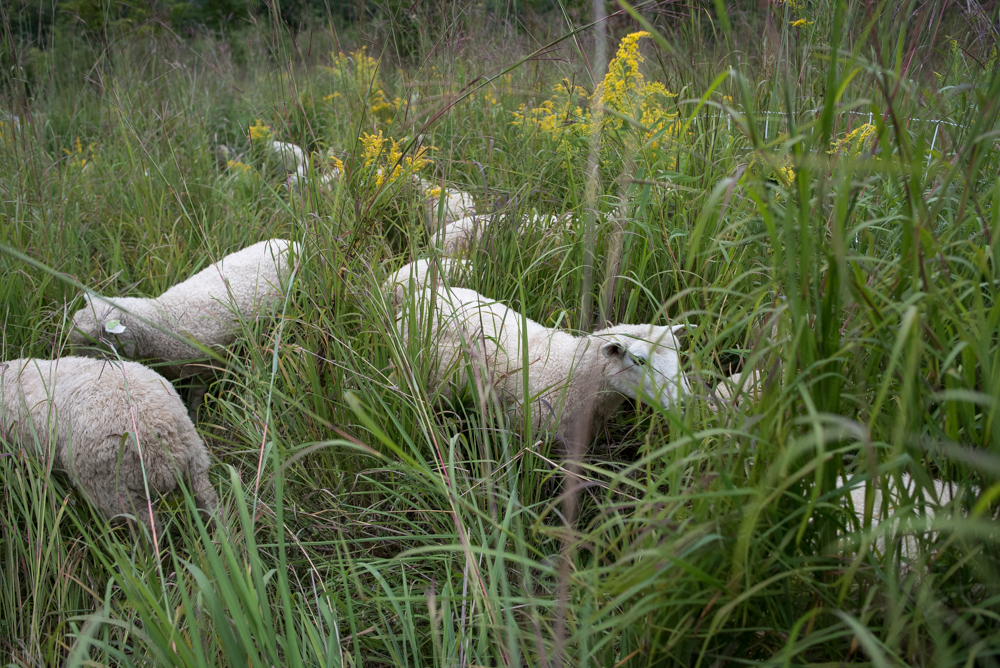 The big bluestem grass that dominates this pasture is over 7 feet tall in many places, and it takes the sheep some effort to push into it.  Setting up electronet through it has sometimes tested my commitment to moving the flock twice a day.  The words of encouragement from my mentor:  “Pull up your socks, princess.  No one said this would be easy.” Yeah, ok.

I have dreams about making sure the sheep have water, sometimes anxiety-filled dreams.  My systems are getting better, but it still feels like the least refined part of our traveling sheep show.  At Eric White’s place, the fields are on a steep hillside, and there’s a logging road that reaches a semi-flat spot at the top of the pasture.  As long as I could get my tank up there,  gravity would graciously deliver water to the flock; the tractor obliged, though I still get unnerved on steep terrain. 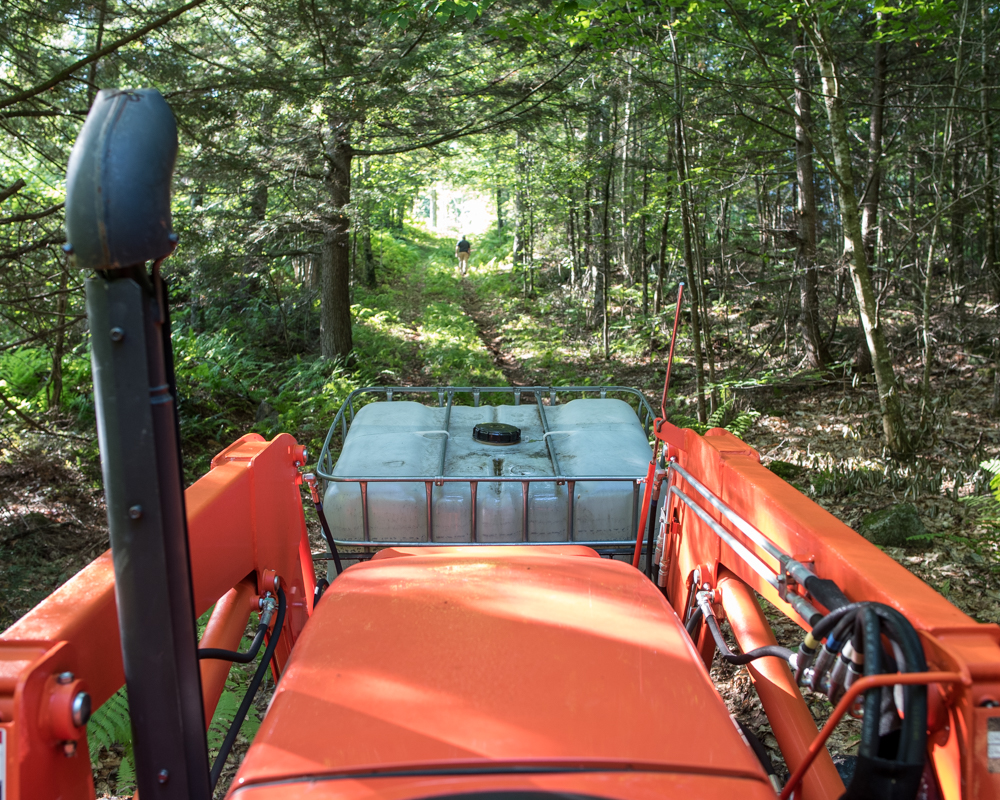 Turning diesel fuel into potential energy would have felt like selling out in my earlier bicycle-militant days, but I’m sure grateful these days to have the option.

Today my flock went back on the road to graze Eric White’s hilly pastures across the valley from us.  The only access to the new fields was a steep logging road.

Cass was able to move her sheep the ¼ mile up the road with no fences to contain the flock — the girlie is turning in to a real sheepdog.  Between gathering and sorting sheep on my farm, loading the trailer, and driving the sheep up the logging road, she ended up working for much of the day.  It caught up with her after the final move. 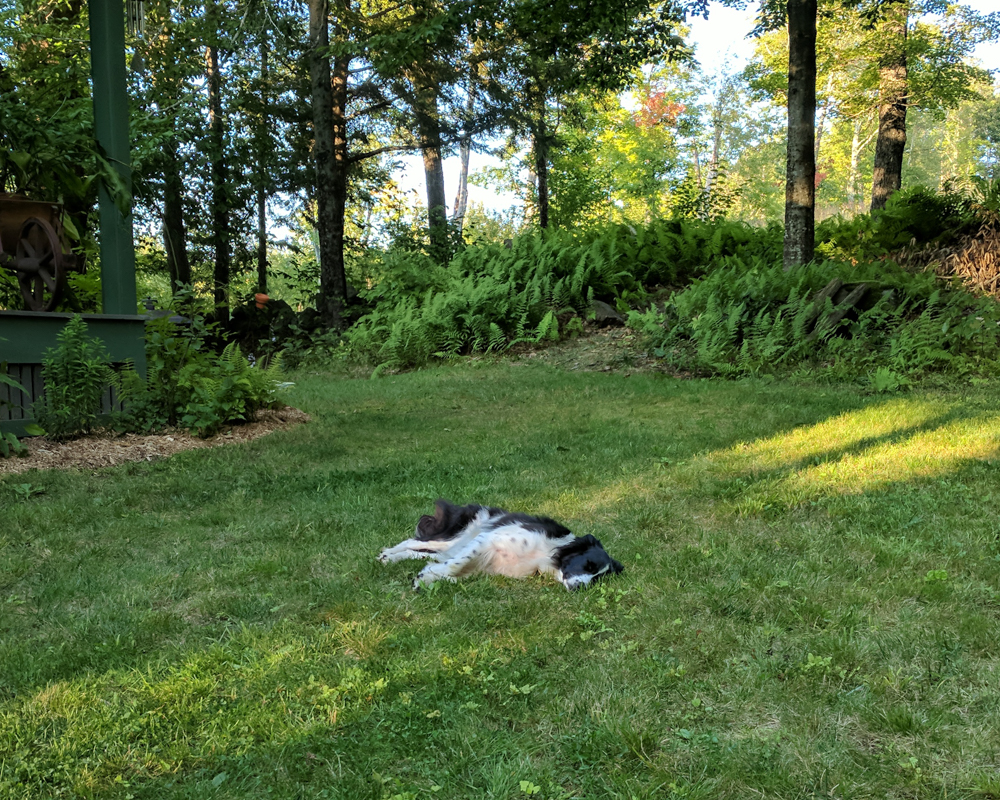 On Thursday I got the good news that the ewe with the suggestive lump on her neck tested negative for CL, both on the blood titer and the culture of material the vet aspirated from the lump.  When Simon called with the results, he said the next step was to lance and irrigate the abscess, since the contents weren’t an infective danger to the rest of the flock.  “You can do that, right?” he said.  I’m learning that the essence of being a new farmer is replying “Of course!” to questions like that, irrespective of my confidence level.

Today was another weighing day for the flock — I’ll report on the numbers as soon as I’ve digested them — so I had an opportunity to do some field surgery while #1402 was in the raceway of the handling system.  I also had the benefit of helpers today, Jim and Leslie Casey (thanks!), so everything was going more smoothly than when I weigh the flock by myself.  Simon instructed me to hold the lump away from the critical bits in the ewe’s neck, lance it with a sharp blade, squeeze out the contents, and irrigate the wound with dilute iodine solution (the color of weak coffee, he said).  Jim was good enough to record most of the procedure, while Leslie assisted the surgery.  I’m not generally a fan of trigger warnings, but squeamish folks might not want to watch.

The side field off the main road was one of the last holdouts.  The labyrinth of half-assed fence and head-high weeds made it hard to know even what was in there, and turning it into a useful part of the farm seemed infinitely far off.  When I tried to mow a bit of it a couple of weeks ago and got hidden fencing wrapped around the flail mower, it only reinforced the sense of Here Be Dragons.  So it felt like an enormous achievement when Jered, my occasional helper, and I pulled the last of the wire fence and fence posts, and I was able to mow enough of the field to see what it might become. 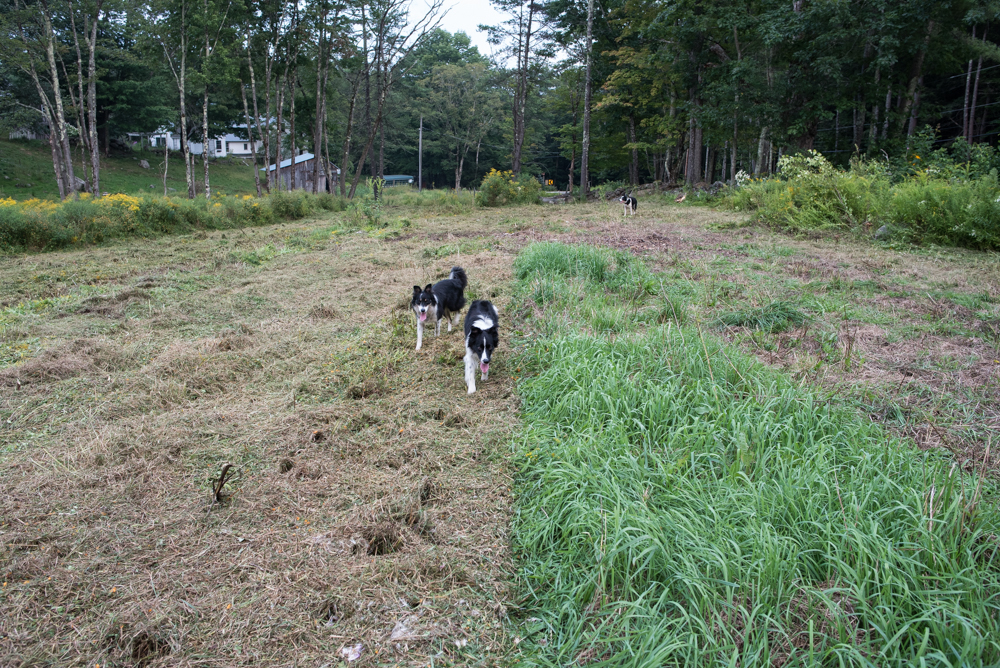 I was excited to see the green strip in the middle, where I had previously mowed, was already growing nice-looking grass.  I guess it was hiding under the nettle and goldenrod, waiting for a little sunlight to come its way.  I’m hoping the rest of the area will quickly return to grass as well.

After a bunch of mowing, I realized how close the field is to my house. 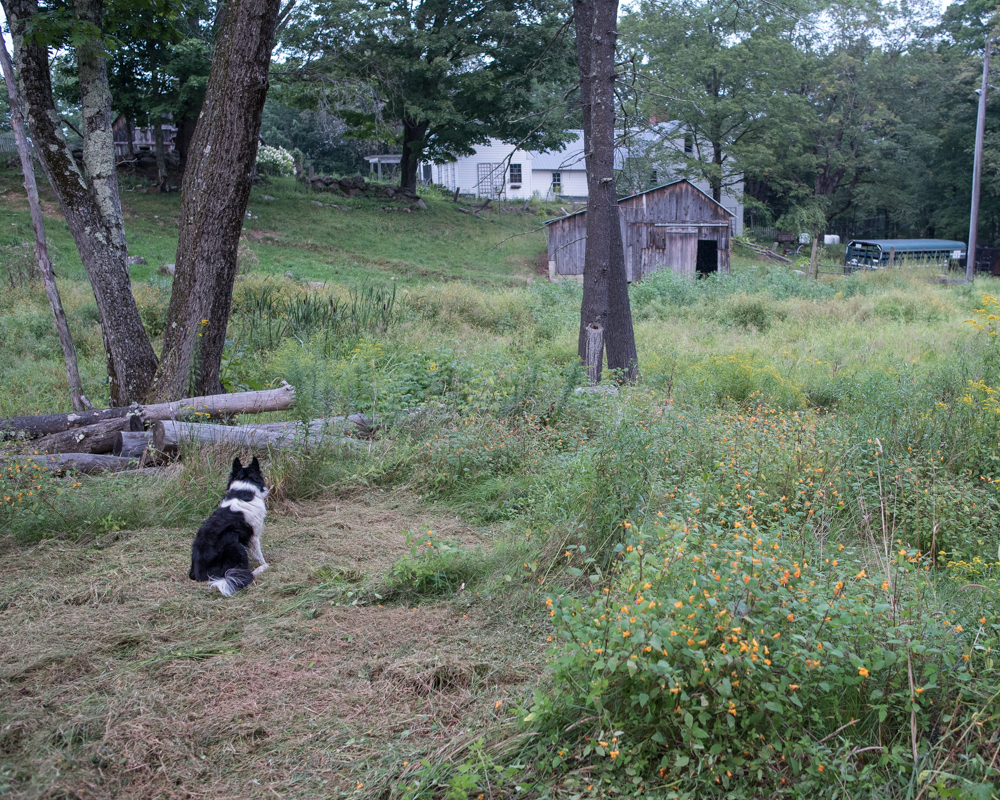 Between the fence, the weeds, and the wet area just beyond Luc, that part of the farm felt almost infinitely remote.

Since this is New England, inevitably there were rocks.  The granite and the mower fought to a draw. 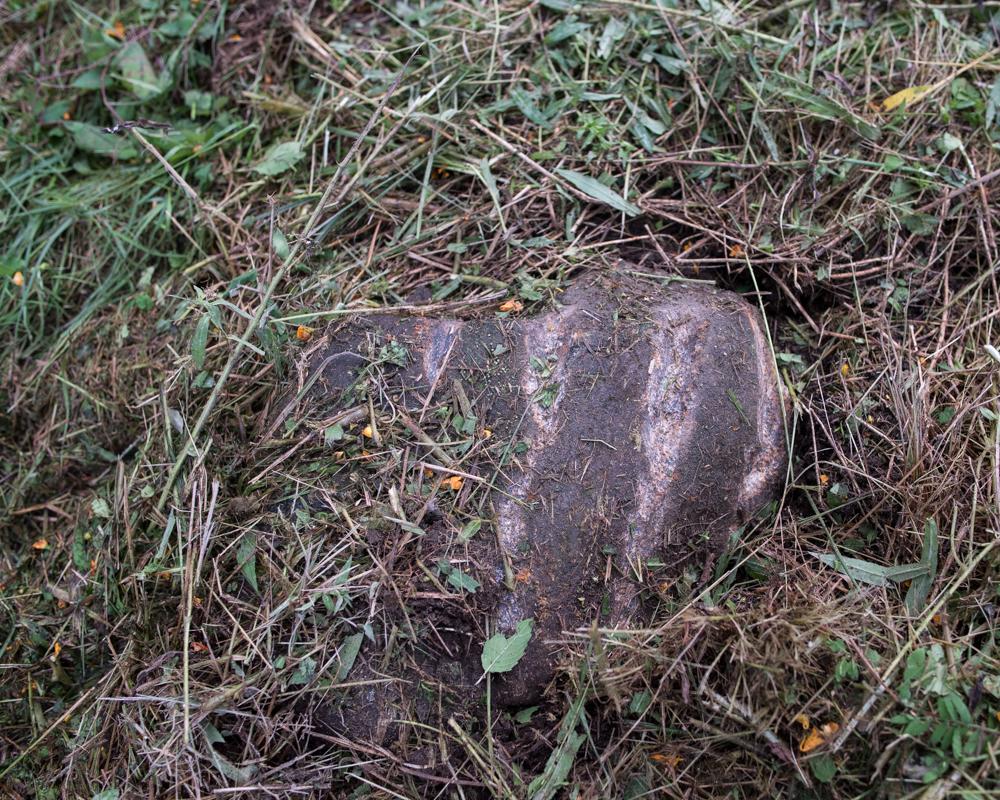 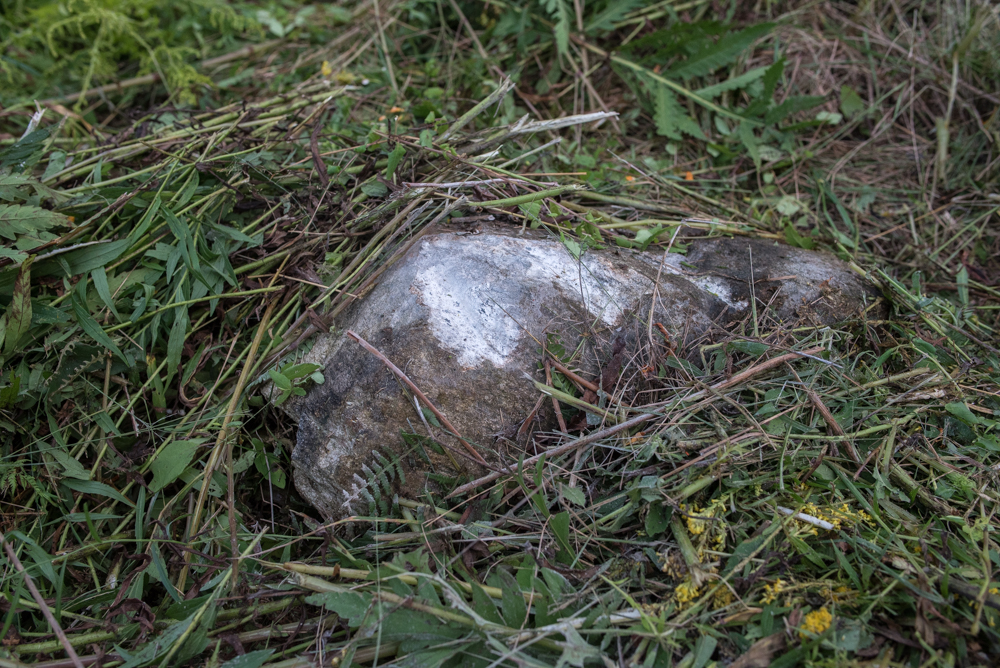 While some of the rocks we big enough to notice before driving over them. 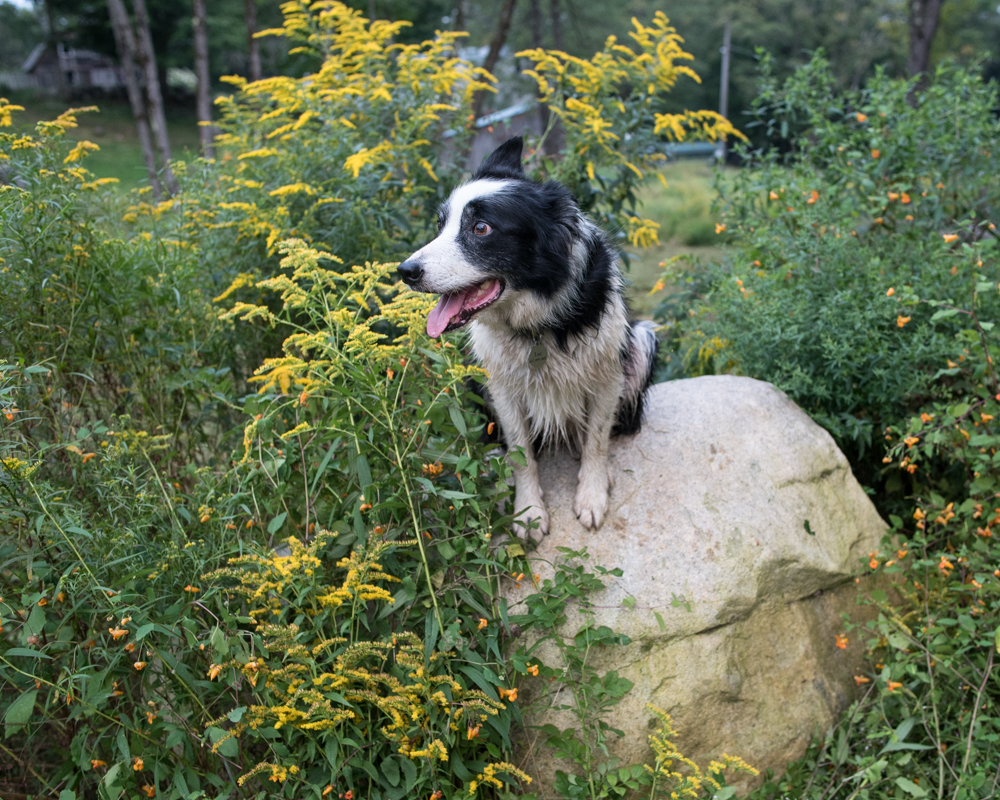 I also found the boundary between the usable pasture and the wet area beyond. 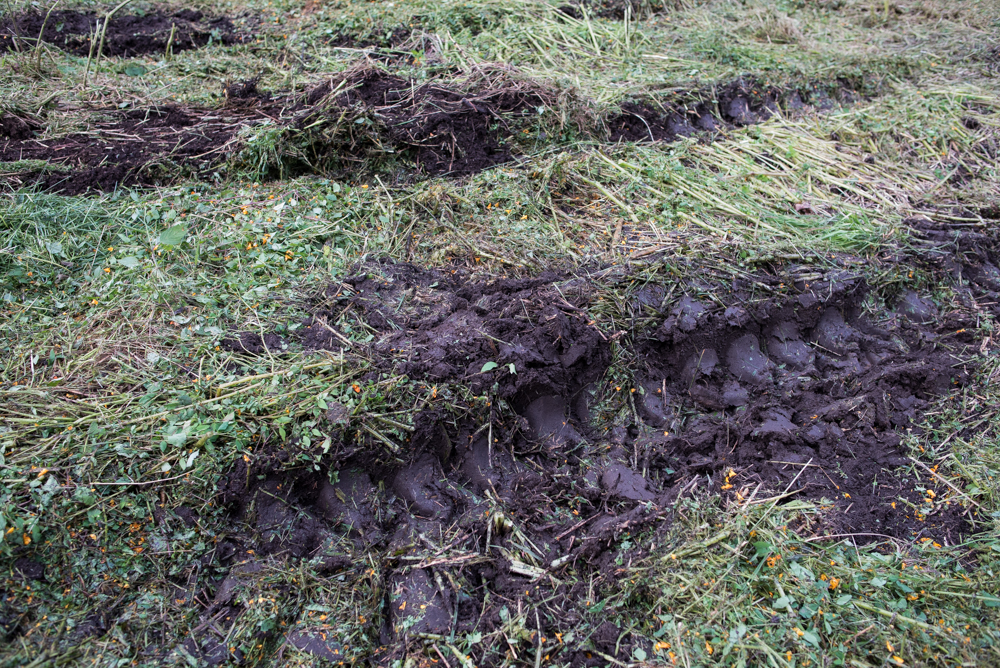 It’s been raining a bit recently, so perhaps this area would be usable in a dryer year.

I’m picking up some North Country Cheviot ewes in New York next week, and I plan to give them a short quarantine stay in this new field before they join the rest of the flock.  Since there won’t be much grass yet when they arrive, I’ll feed them one of the big round bales left over from last winter.  Their manure will help nourish the recovering pasture, and when the whole flock is back in October, I hope to have a week or more of grazing there.  Progress on the farm has felt slow, but these occasional punctuations of visible progress are very nourishing.

There are something like two dozen mature apple trees (that I’ve found so far) on the farm.  Last year they bore almost no apples — people said there was an ill-timed frost in the spring that annihilated the blossoms — so I’ve been wondering what sort of fruit they produce.  I’ve been keeping half an eye on the trees, and my impression was that most of the fruit wasn’t ripe yet, but when I looked down the power line cut this afternoon, the apples declared themselves! 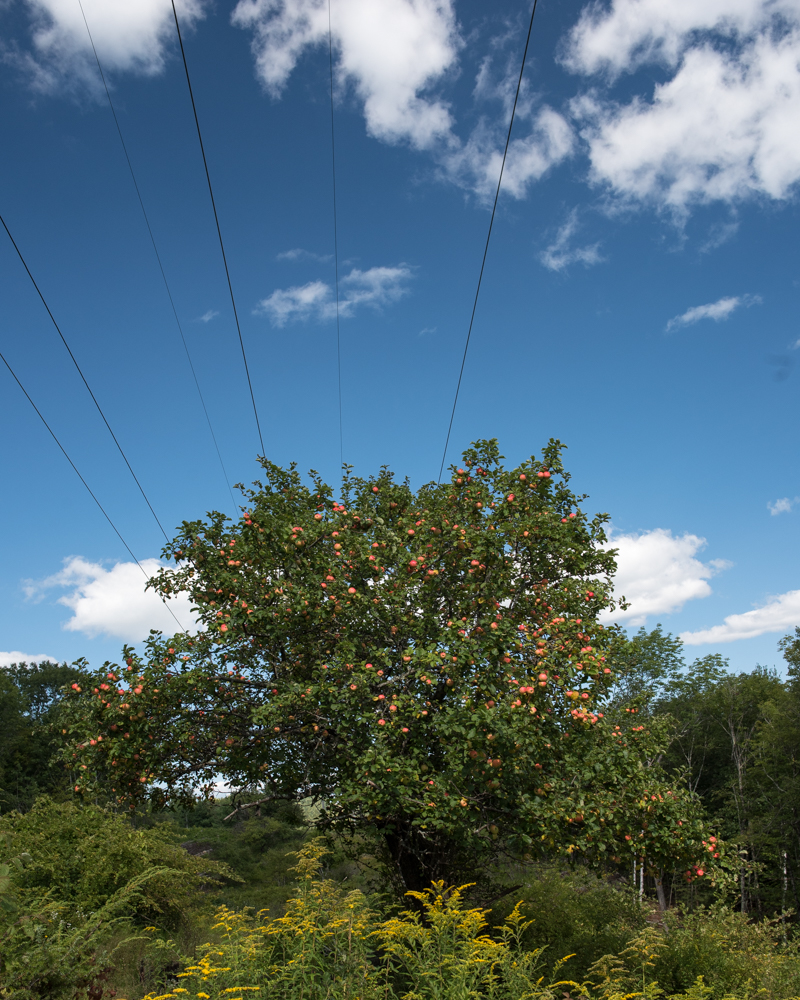 And the apples are really tasty, and not quite like anything I’ve had before.  I’m looking forward to seeing and tasting the other gifts from the farm.

Folks who have been in my house know that I haven’t really unpacked, ten months after moving here, so they might justifiably conclude that orderliness is not my thing. 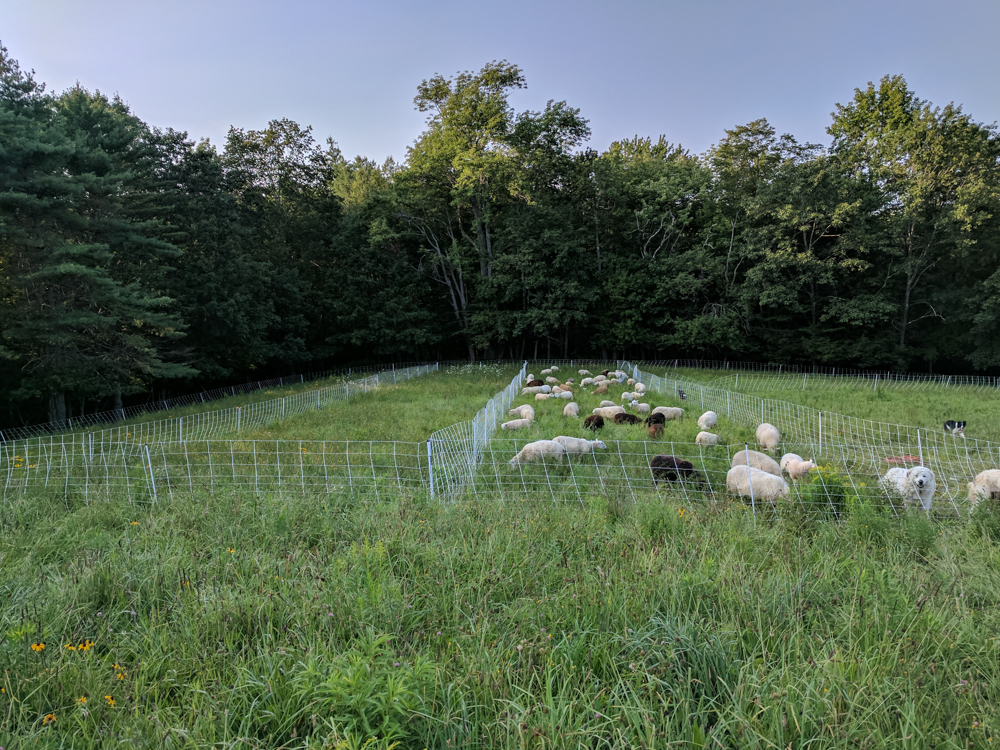 In truth, I get just as  excited as the next guy at the sight of a neatly laid out linen closet, but my energies have all been focused on the land and the animals.  So I felt a little swell of satisfaction when I looked down the hill at the grazing paddocks I’d set up, imposing parallel lines and right angles on the wilderness.

I was checking in with the road crew in front of my house this morning as they were fixing washouts from Friday’s storm (6.2 inches of rain, they reported.  Goodness.) when I noticed this wacky-looking creature. 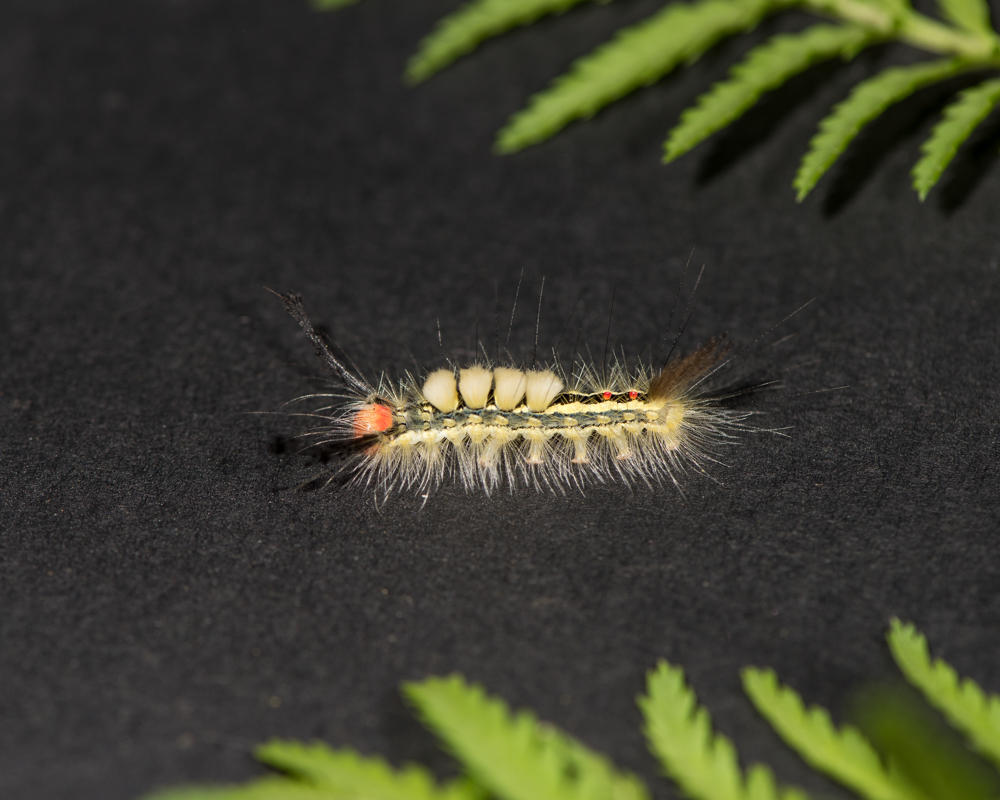 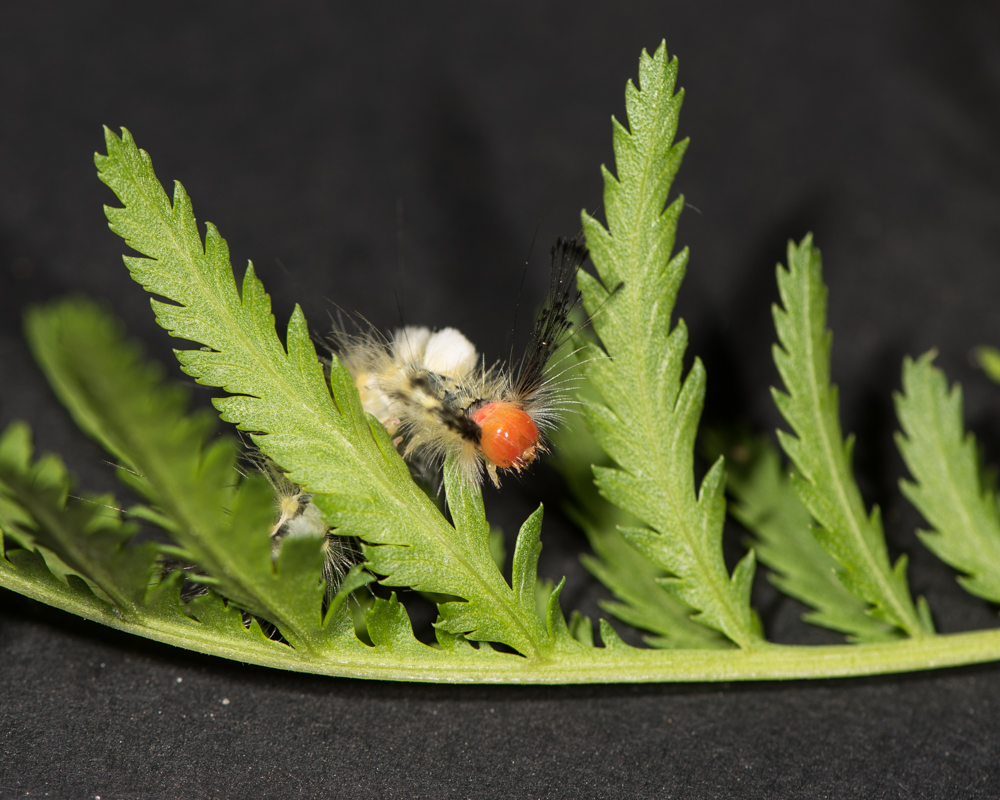 The guys in hard hats immediately warned me not to touch it — It’ll bite you! — but I took my chances.  It turns out there’s a broad concern in the land about the dangers of fuzzy caterpillars, but I found a comforting guide to self help after caterpillar attacks.  This particular fuzzy threat is called the White-marked tussock moth caterpillar (Orgyia leucostigma).  I released it back into the wild, to find more victims.