I got a visit after lunch today from an evangelist neighbor.  He brought a gift (a loaner, actually) to help me prepare for the coming deer season. 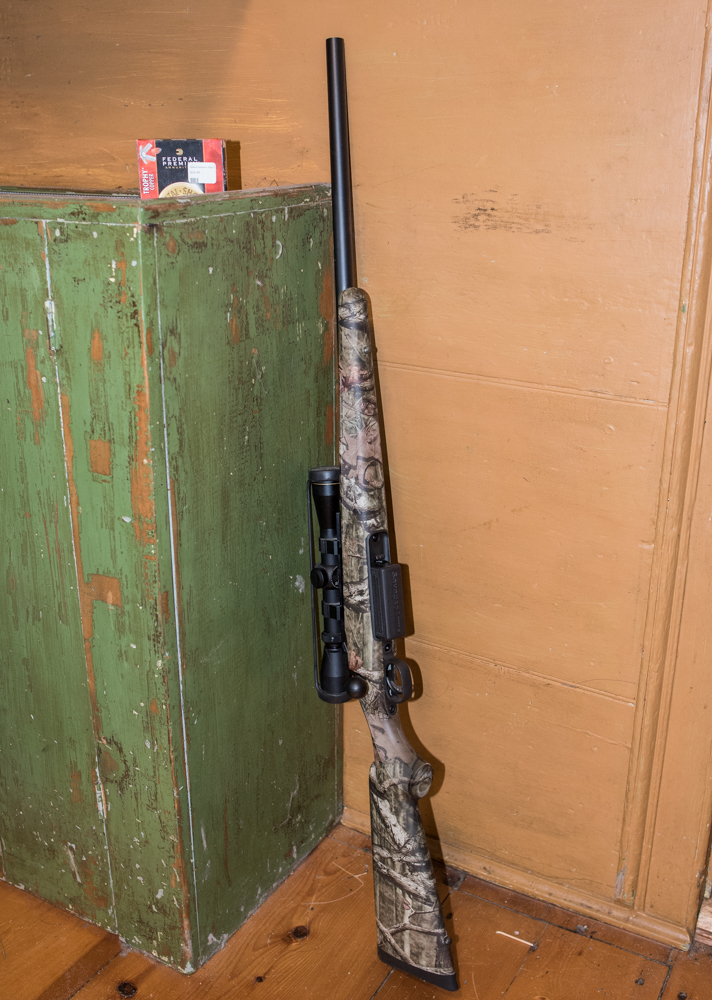 I’m not a true believer yet, but I will certainly read the literature.  Some target practice is in order, too. 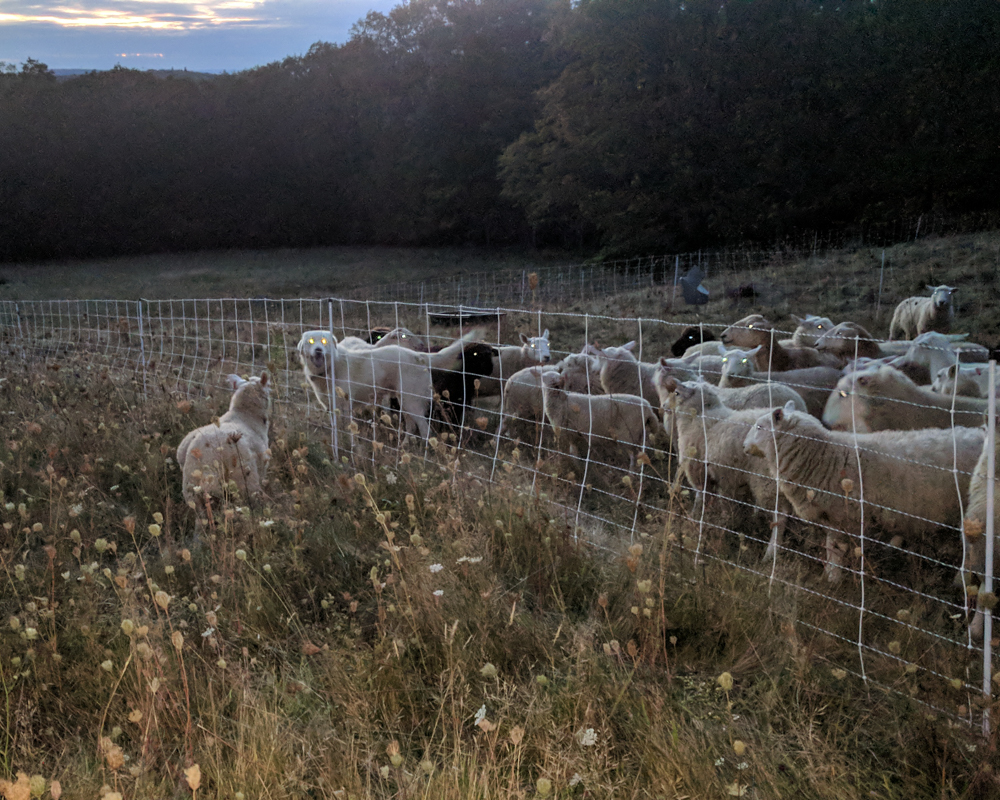 A little over 100 years after its first formulations, quantum mechanics is getting trendy, popping up in social science and the arts.  The gratuitous references and gobbledegook that result make me very grouchy, but perhaps I need to fight fire with fire.  This, therefore, is the inaugural post in my new series Quantum Mechanics and the Modern Shepherd.

One formulation of Heisenberg’s Uncertainty Principle asserts that the act of making a measurement inevitably changes the thing being measured.  Werner Heisenberg was describing the characteristics of fundamental particles like electrons, but his principle is equally applicable to livestock guardian dogs.

Bravo and Cleo are typically wrestling whenever I see them, but Chip and Kathy Woodbury, whose house overlooks our current pasture, have told me that this behavior vanishes as soon as I’m gone — the big fluffy dogs immediately go back to watchful guarding.  The shepherd, by observing his dogs, fundamentally changes their behavior, and therefore can never gain firsthand knowledge of his guardians.  In future experiments, I will determine whether sheep are fundamentally unknowable as well.

No rural idyll is complete without gunfire; Sullivan does its part by hosting the Cheshire County Fish and Game Club. 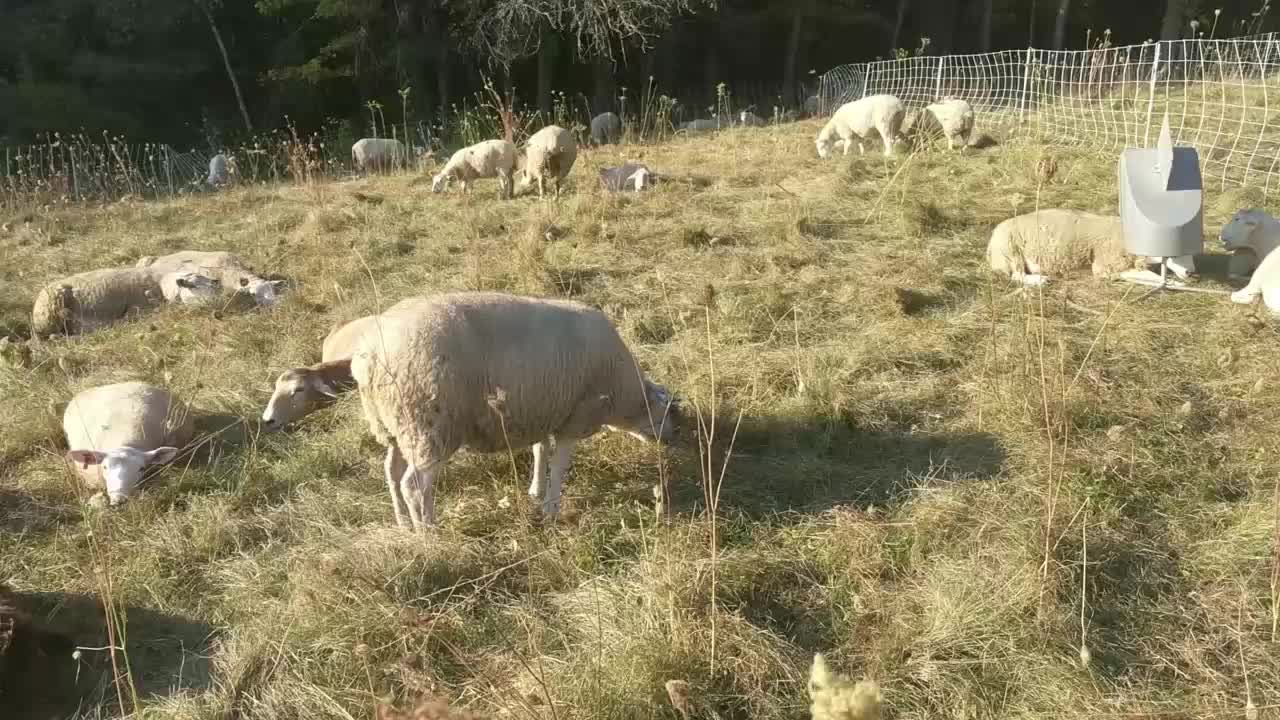 The shooting range is just down the hill from the Woodbury pasture where the flock is grazing, but the sheep and guardian dogs don’t seem to pay it any heed.  Cass and Chloe likewise show no sign of noticing the racket.* 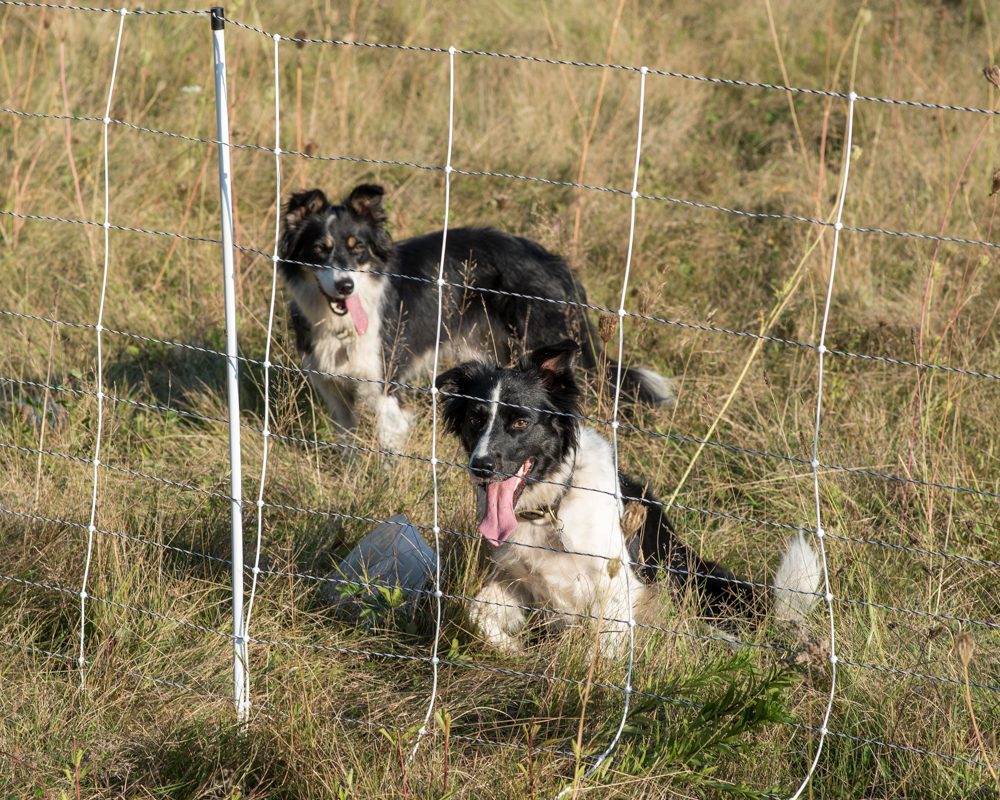 Poor Luc is not so sanguine, taking shelter in Chip and Kathy’s garage when the volleys become too much for him.

*I’ve often said that Cass is so intent when she’s working sheep that you could fire a gun next to her and she wouldn’t notice.  I didn’t realize that my hyperbolic comment would turn out to be literally true.

Shepherding affords all sorts of new opportunities for hypochondria, rationalized as concern for the animals in my care, and fertilized by my general sense that I don’t know what I’m doing.  Every time a sheep coughs, I wonder if it’s just swallowed a tickle-y blade of grass, or whether I have a flock-wide case of Ovine Progressive Pneumonia.  I’ve recently noticed Matilda, one of the Romney ewes, coughing more often than the other sheep, or so I thought.  Then yesterday, she was looking a little puffy around the neck, and I convinced myself that she had Bottle Jaw, a swelling associated with severe anemia, usually caused by a heavy burden of Haemonchus contortus, a parasitic nematode. 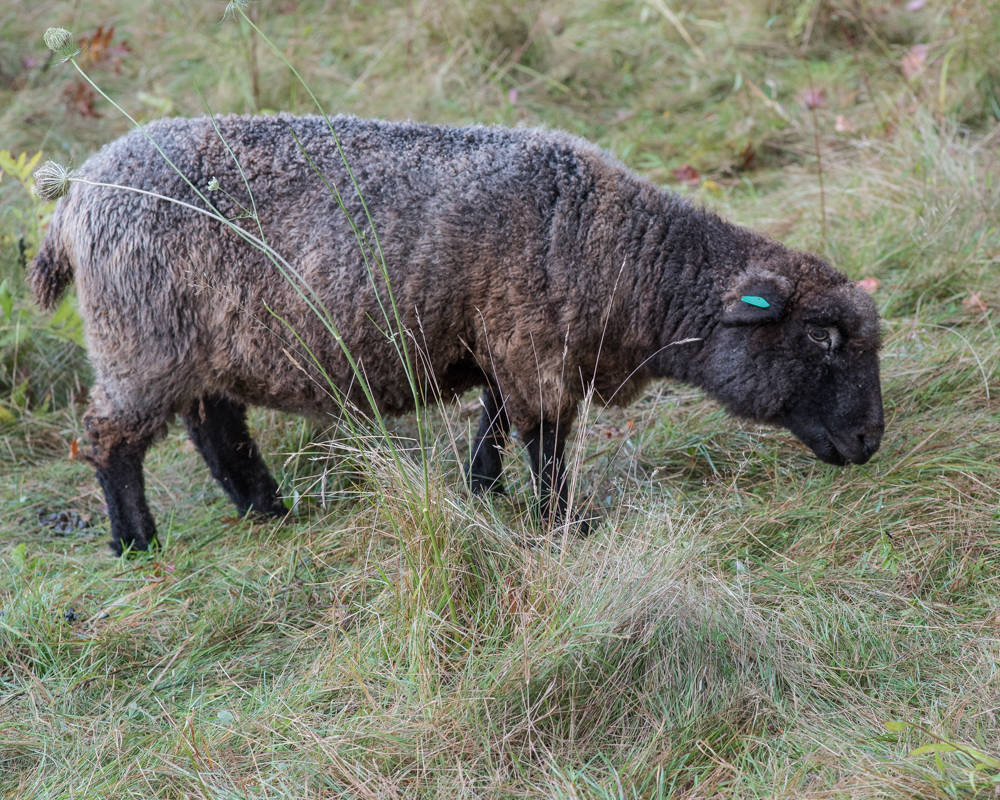 I contacted Bill in a bit of a tizzy, describing what I thought I was seeing.  He said coughing and bottle jaw are signs of a life-threatening infestation with Haemonchus, and urged me to treat the ewe with antiparasitic medication as soon as possible.  I was worried that I wouldn’t be able to get close enough give her a dose while she was out on pasture, but Matilda was very calm this morning and took her medicine like a champ.

This evening, I did a bit more poking around her putative edema, and it felt more like puffy wool than fluid accumulation.  When I finally sent Bill a photo of the ewe, he confirmed that the puffy spot was in the wrong place to be bottle jaw, which usually manifests directly under the jaw, not at the sides. And the truth is, I hadn’t heard her cough in quite a few days.  I’m pretty sure that crying wolf is better than ignoring or not noticing a real health concern, but it sure will be nice when I get a clue.

I have a new plant nemesis, a delinquent cousin of the blackberry called dewberry (Rubus flagellaris).  In theory it bears fruit like others in its family, but I think it expends most of its energy plotting against humans. 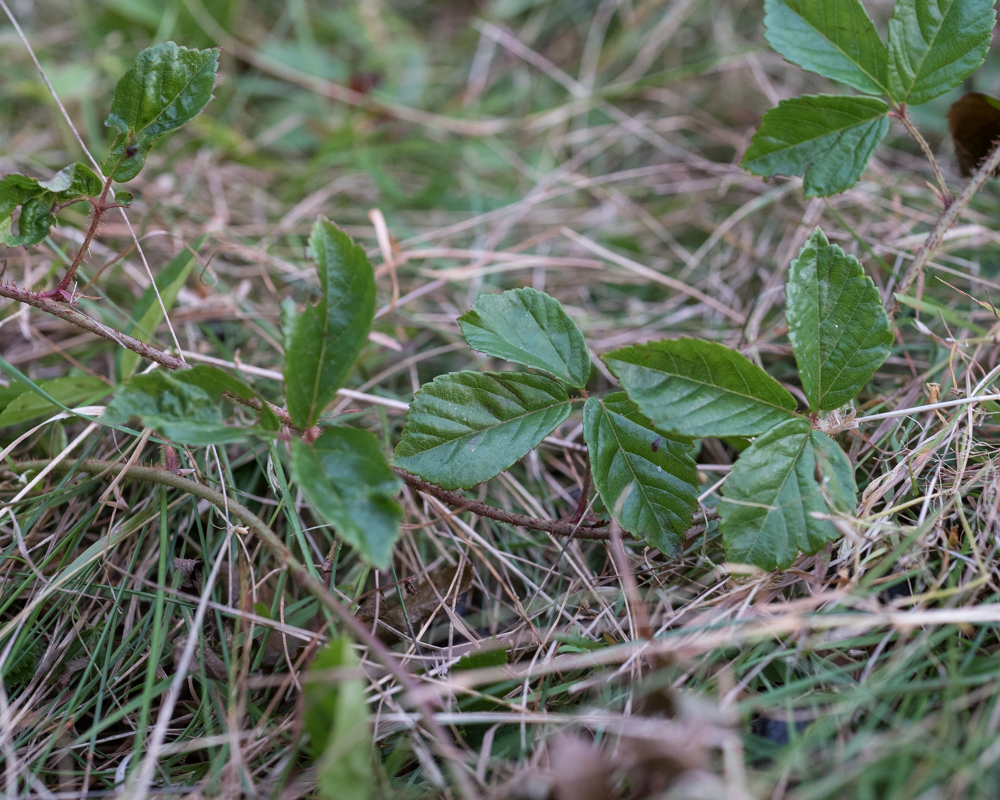 It’s a long, stout vine that grows near the top of the pasture grass, patiently waiting to catch feet.  And if it fails to take me down, it’s perfectly happy to exact a blood tax from my ankles. 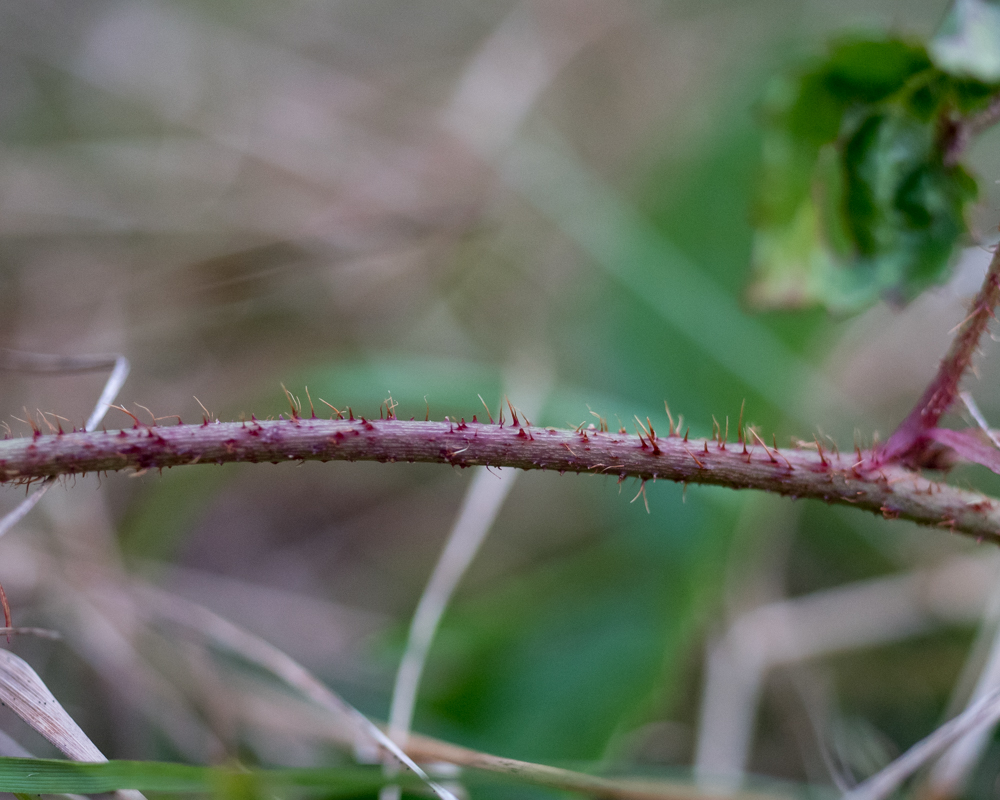 The sheep will nibble on the leaves, but not aggressively enough to set it back meaningfully.  To think that people argue about the existence of a benevolent deity…

When I first got my tractor, friend and advisor Bob Jones promised me that I would come up with uses for it that I could never have imagined.  He was of course right. 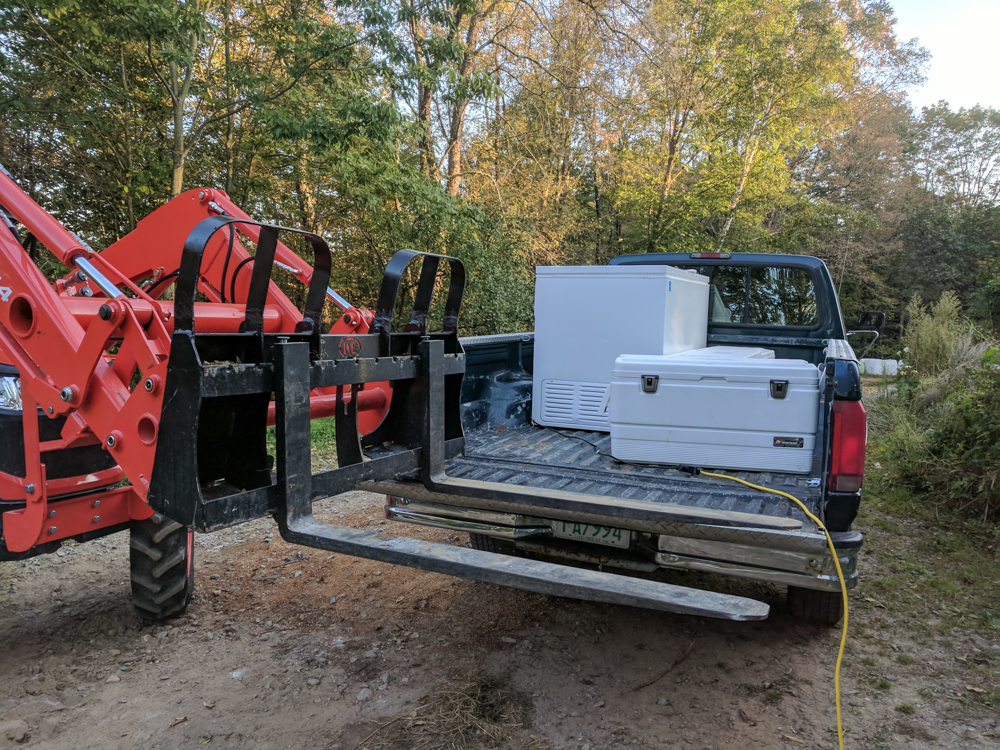 A while back I offered my friend Denise, who was running out of freezer space, that when she got her turkeys slaughtered, I could pick them up and hold on to them for a while (for the moment I have more freezers than frozen things to put in them).  I made two small miscalculations:  I didn’t think through how much volume 22 turkeys occupy, and I didn’t count on it being 90º in late September.  I have four marine coolers (in the foreground above), but I realized that 28-lb turkeys might only fit 2 to a cooler; the math didn’t work.

When I shared my predicament with Bill, he suggested that I put my newly-acquired (and empty) chest freezer in the back of my truck, plug it in overnight, and put the turkeys straight into a cold freezer before driving the hour back to my house.  With forks on the front of the tractor, an impossible lift turned into an easy task, and the turkeys made it safely here.

I had a small, bittersweet victory over inefficiency today.  Regular readers will know that I obsess about water and the challenges of getting it to my flock.  When we’re out grazing the town, I bring water in a 250-gallon tank that rides on the front of the tractor.  I place the tank at the high point in the fields we’re grazing, and pipe it down to the flock with gravity doing the work.  The sheep drink out of a couple of 15-gallon tubs, and often they don’t drink everything I’ve given them.  I’m loathe to waste water (it’s usually a pain to refill the 250-gallon tank), but the 15-gallon tubs are heavy and floppy and awkward to carry.  So when I move the sheep, it’s hard to bring leftover water with them, and I do in fact waste a good deal of it.

I’ve been using some of my idle brain time (like when I’m rolling up electronet) trying to come up with a better way to move stock water. I had a low-slung water cart half-designed in my head when I remembered that my logger friend, Mark Smith, moves his chainsaws and other gear over dry ground using a utility sled.  This is the same sled that was such a revelation to me last winter, but I had forgotten that it might be useful in the summer as well. 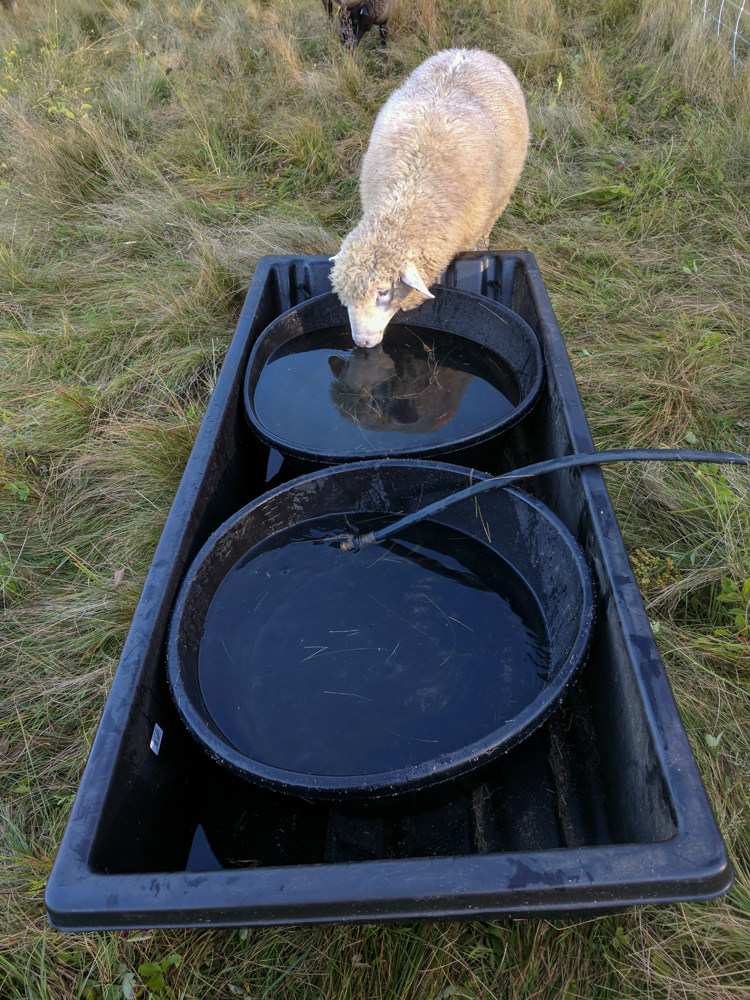 The idea worked, and I’m very excited not to be carrying half-full stock tanks, wondering each time whether my back will go out, and whether it will have been worth the water saved.  But it’s hard not to be peeved that the solution has been leaning against a wall in the barn since last winter.

Nothing more complicated than a sheep sunset tonight, with Vermont mountains at the horizon. 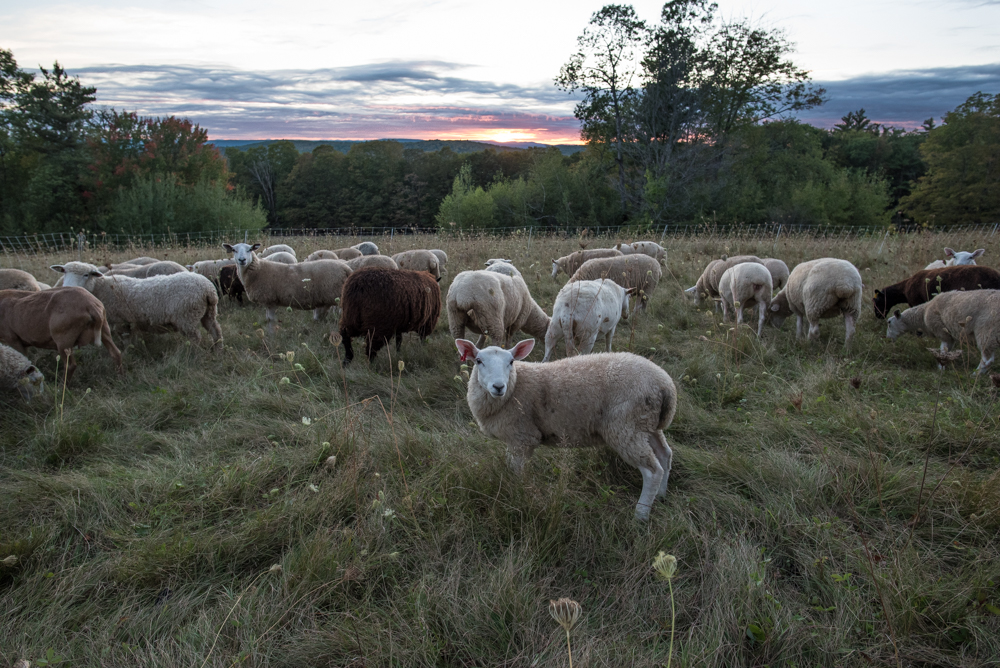 Another day, another farm implement: 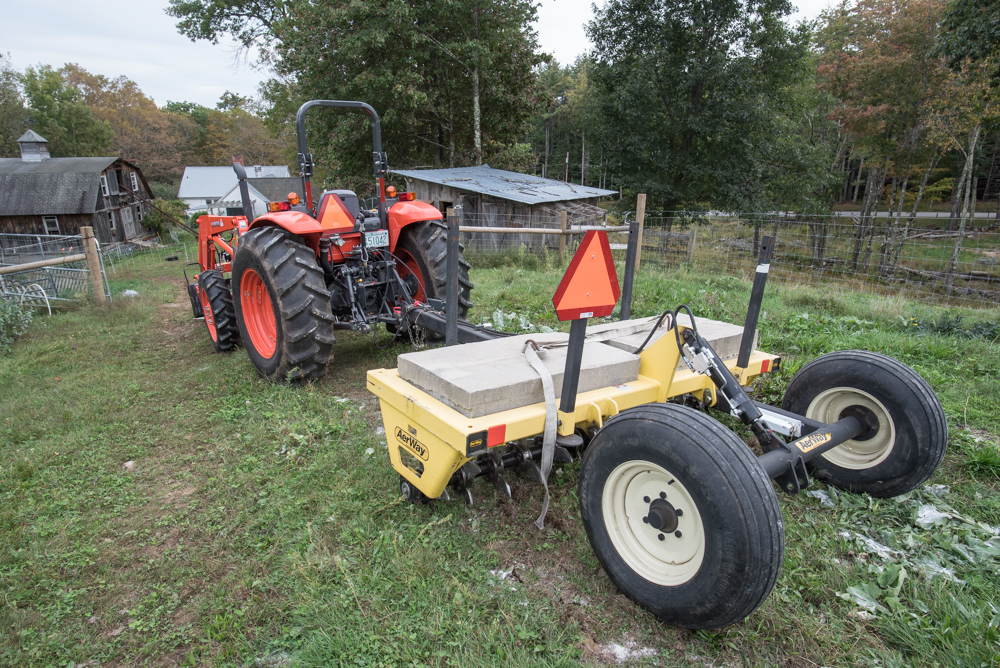 This object, made by a company called Aerway, cuts little slots in the soil and is supposed to help reverse compaction. 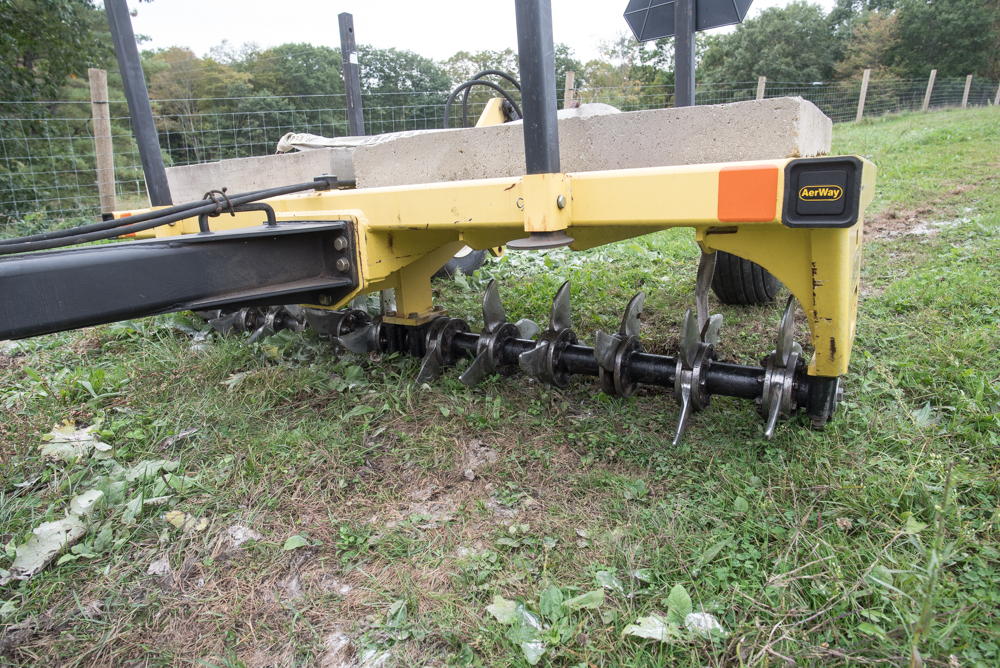 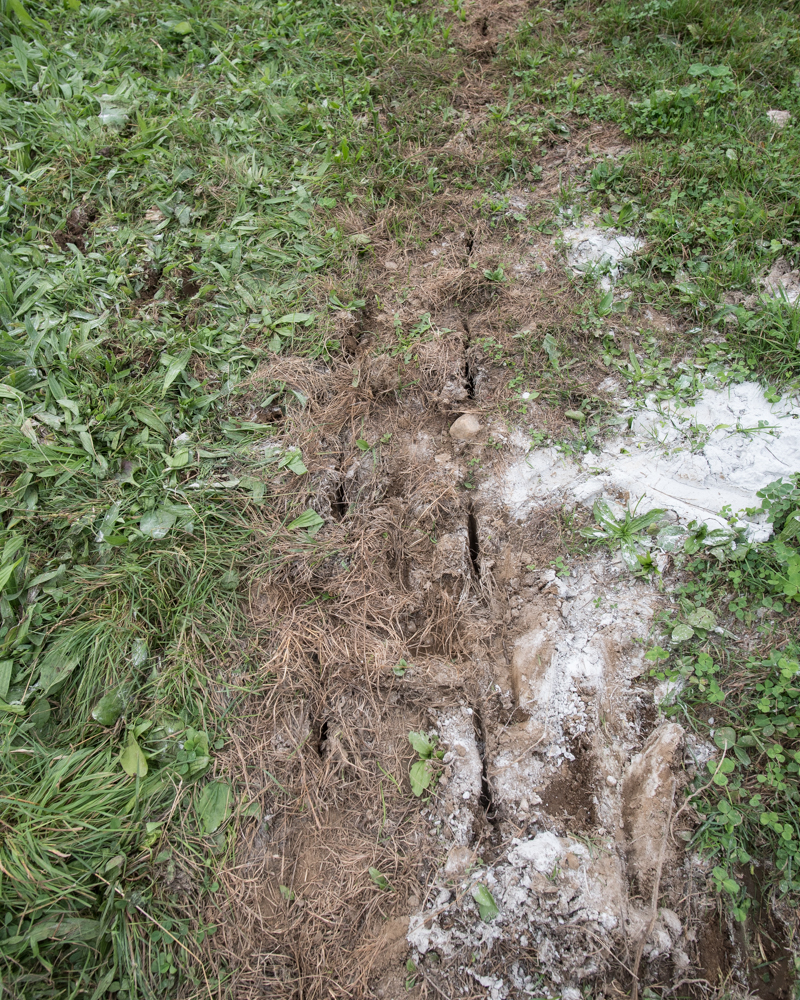 I feel like all the driving around I did with the lime spreader probably compacted the soil to within and inch of its life, so I’m hoping this thing works.