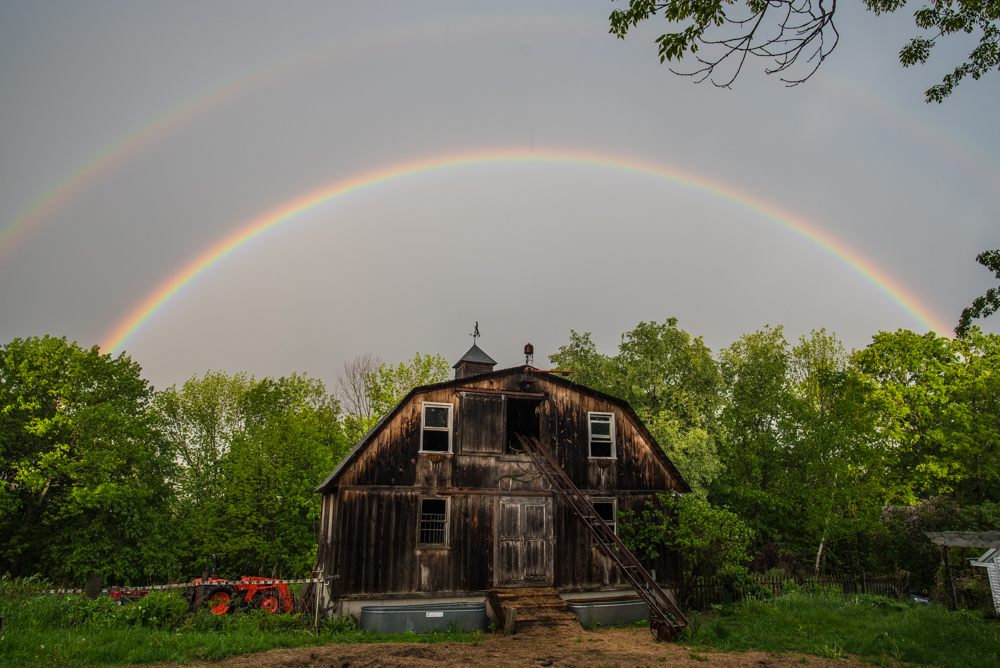 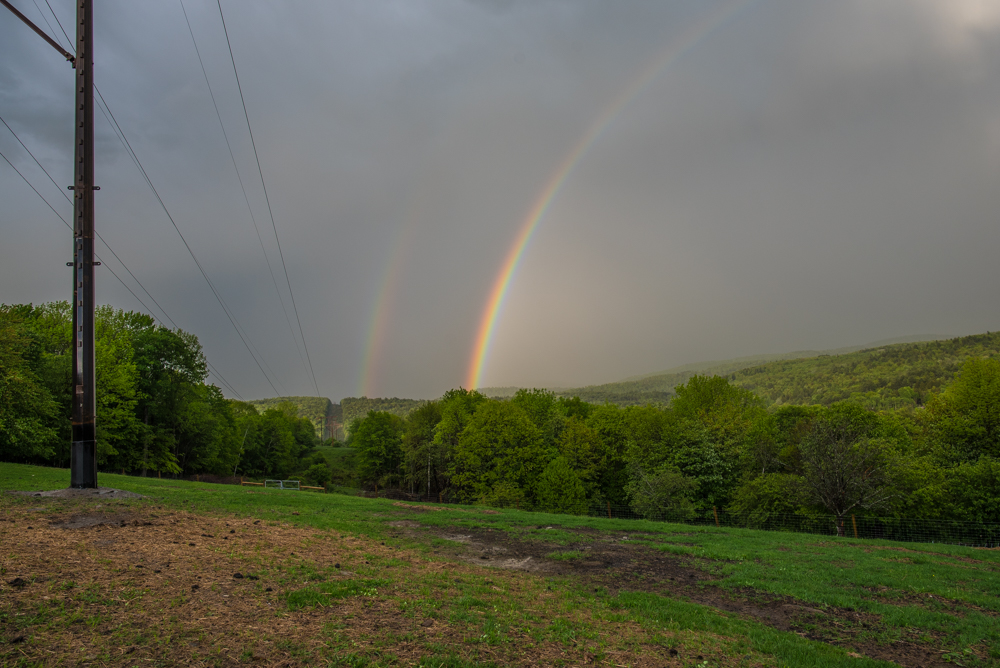 This is what 65 sheep look like rushing onto new pasture.  The ragged ones are Katahdins that haven’t fully shed out their winter coats.  The lamb and ewe at the end are consistent stragglers. 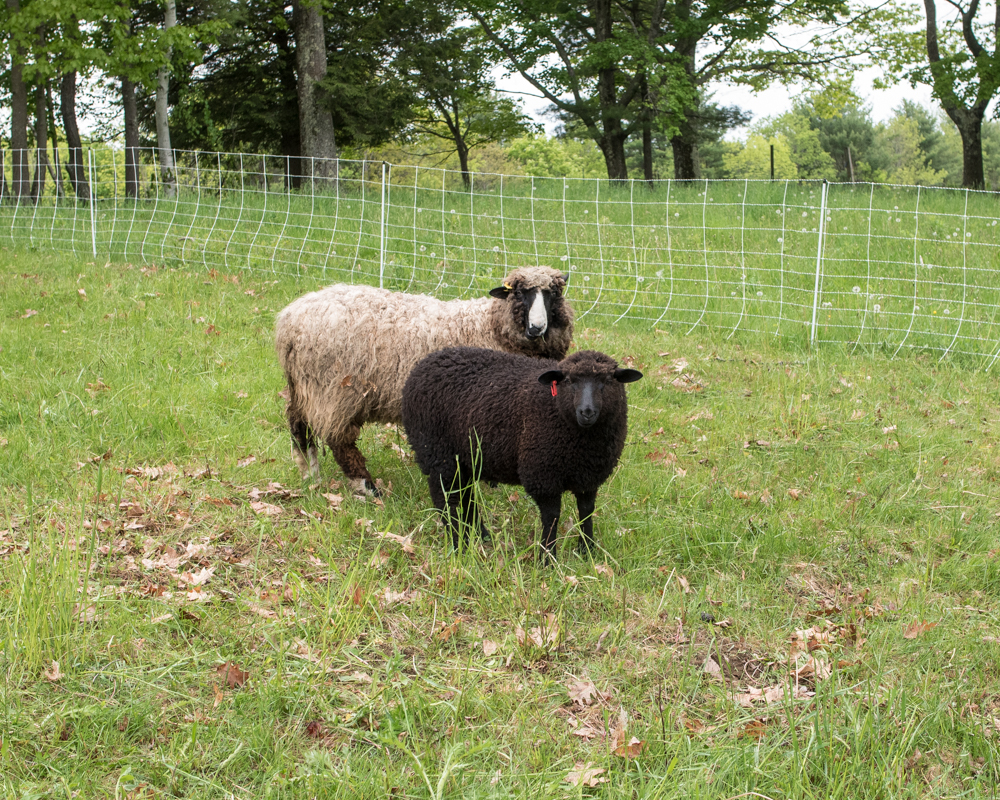 I noticed this morning that #701, the first (surviving) lamb born on the farm, is getting very close to her mother’s size.  The ewe probably has 4 inches of fleece bulking her up, while the lamb has perhaps an inch, so the size difference is smaller than it appears.  I don’t know enough to claim that this is an exceptionally fast-growing lamb, but I’m amazed that the calories from grass and a little bit of corn can produce such a large creature in four months.

When I met Cleo at her farm in Vermont yesterday, she was too uneasy to come near me.  I figured that I would have a long project of gaining her trust here at my farm, but when we arrived in Sullivan, she was much more comfortable with me.  Things continued to improve this morning, so I decided to push her a bit and try brushing her. 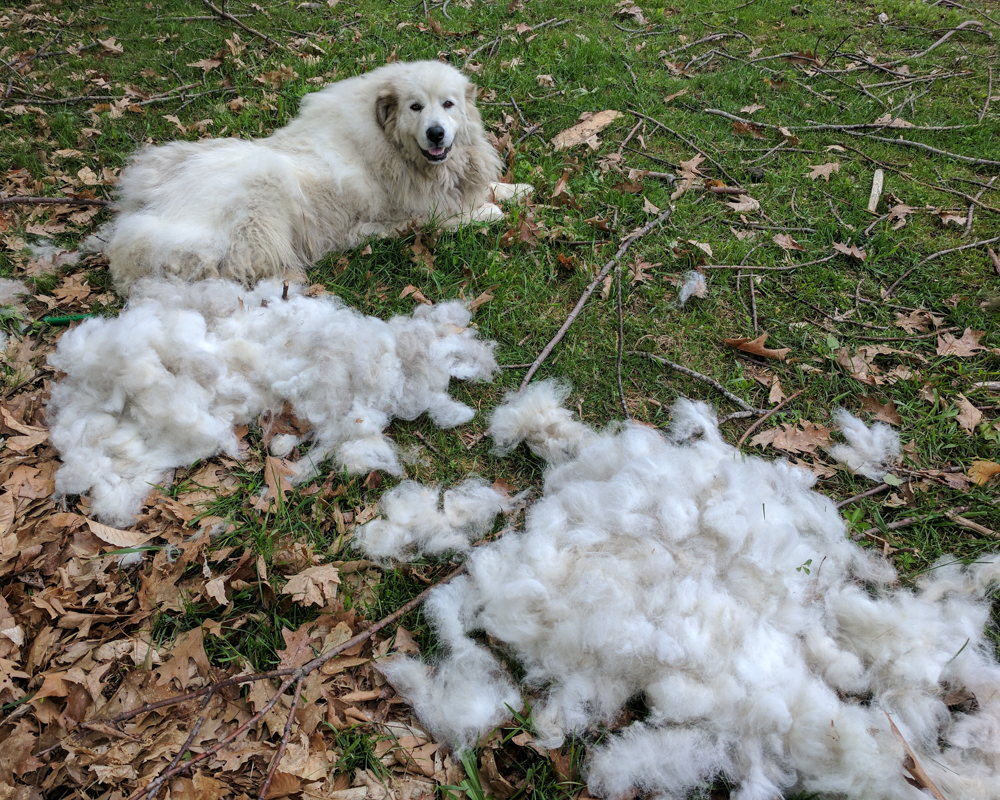 She settled in and seemed to actually enjoy the attention, and we made some progress finding a dog underneath all that fur.  By this evening, she was glued to my side the entire time I was in the pasture with her and the sheep; I’m amazed at how quickly she’s come to trust me.

Ever since Bravo arrived, I’ve had a sense that he would be happier and more productive with a partner.  I suspect that some of his less-savory behavior was motivated by boredom (though some was certainly the inherent idiocy of a young male Maremma); he was previously paired with an older female Maremma at Dancing Ewe Farm.  Experts also argue that a bonded male-female pair provide the best protection — convincing predators (coyotes, mostly, around here) that the farm is already the home territory of a pair of canids and should thus be avoided.

I’d put the word out widely that I was looking for a second guardian dog, and after several false leads, I brought home Bravo’s new girlfriend* today. 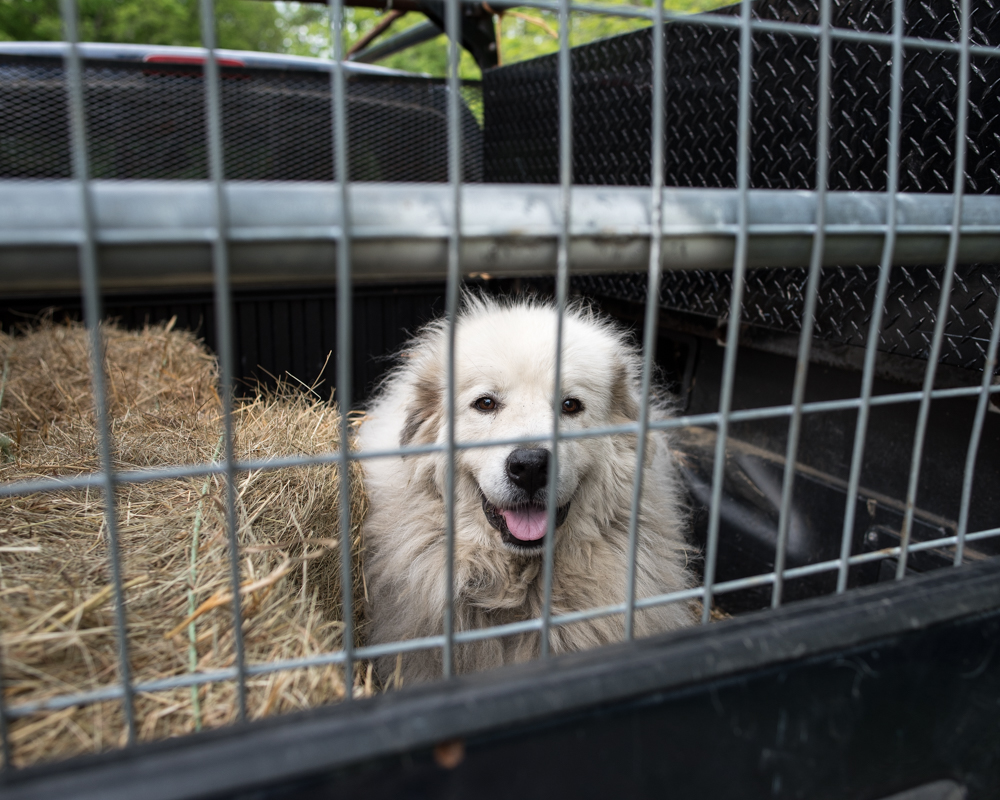 Cleo is a 6-year-old Great Pyrénées who had been guarding goats at Willow Moon Farm in Vermont; the dairy is shutting down, so Cleo needed a new place to work.  Since she had a long history as a successful livestock guardian, I was confident that Cleo would fit in here, but I was concerned about how the introduction to Bravo, the sheep, and the border collies would go.  So far, she and Bravo seem to be delighted with one another, the sheep are relaxed around the two of them, and there were no sparks with the BCs. 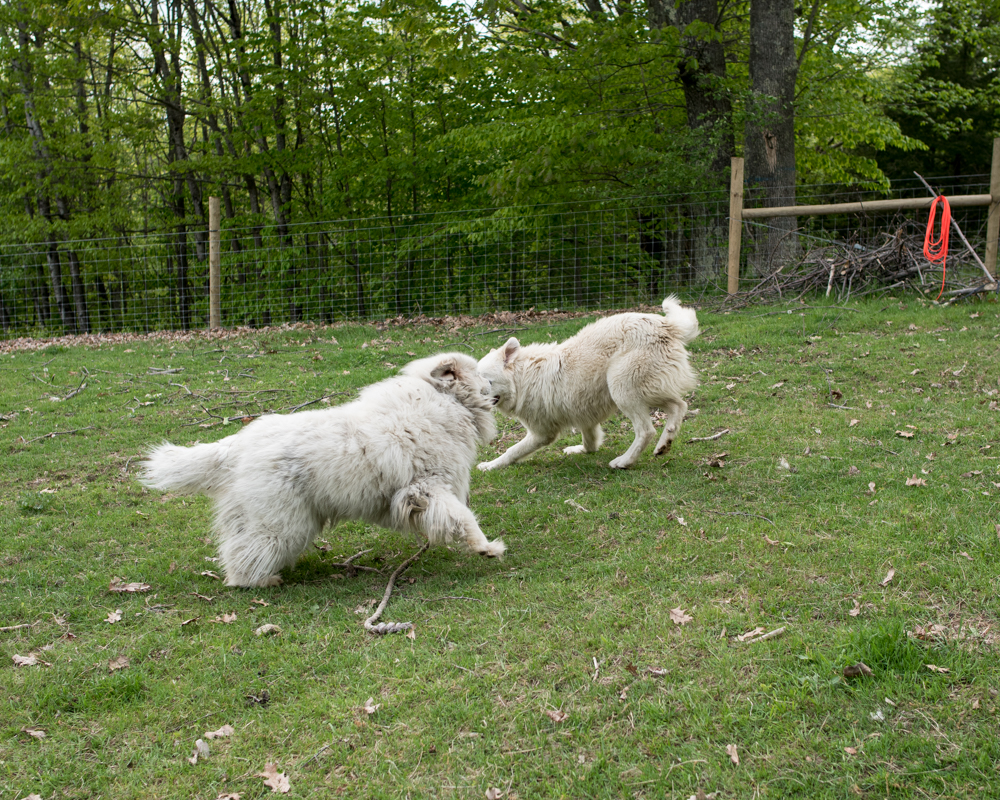 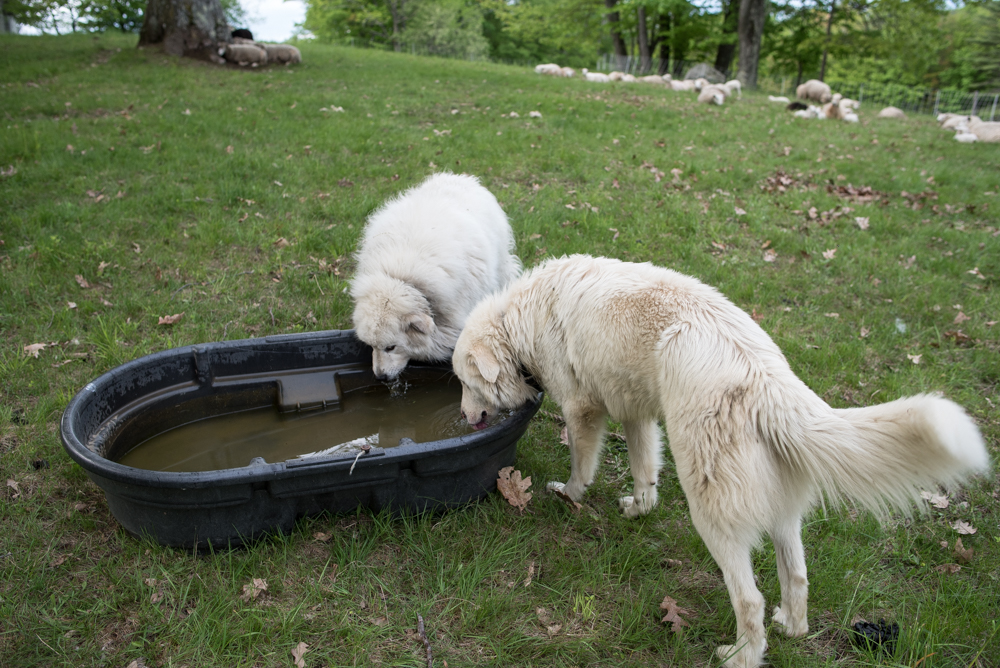 *Cleo is spayed, so girlfriend is accurate only in its most reductive sense.

When the sheep first come onto new pasture, there’s a bubbling energy in the flock.  Some of the sheep seem to have the idea that there’s one perfect blade of grass, and they have to find it before someone else does.

Today I picked up my third ram, a big black Katahdin named Angus, from a farm in Effingham, NH.  Ever since the silly Dorset ram jumped out of the barn window, I’ve had problems with ram logistics, but Angus’s arrival pushed it into must-solve territory.  The chain of complications went something like this:

The astute reader will have discerned a pattern.  Normally, I would use Cass to push all the sheep into the handling system, at which point it would be very easy to grab the rams, put halters on them, and march them down to the barn.  With a field full of tiny lambs, though, this doesn’t work.  The mothers are extremely protective of the lambs, leading them to stand their ground and attack a herding dog rather than moving as they usually would.  And if I did get the sheep into the handling system, the tight quarters would almost certainly lead to lamb-trampling.  So I was left to trying and failing to catch the (very astute and rather quick-reflexed) rams in a big open space.  Bill would normally make quick work of a problem like this, but he’s been completely maxed out by a new job, house move, and caring for his parents.  Instead, my tractor guru Bob came to the rescue; though he’s never been much around sheep, he grew up with cattle and hogs, and his livestock instincts are still sharp. We also deployed my new almost-secret** weapon, a cleek. 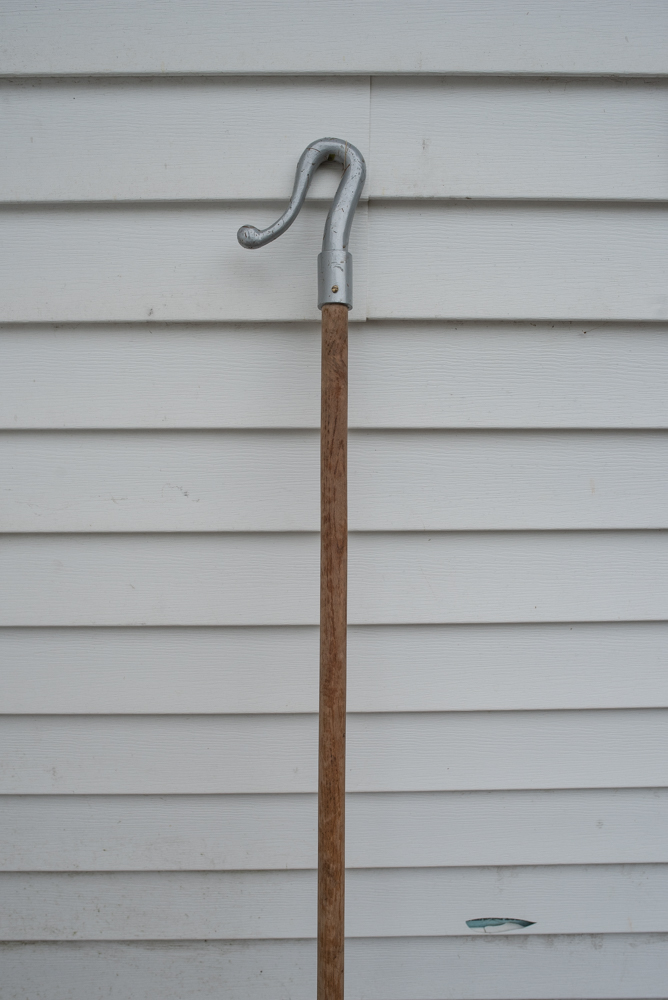 With one of us distracting the ram with a bucket of corn, the other could hook a back leg, and then we’d both tackle him.  Once we fitted the ram with a halter, we could march him into the barn.  Mr. Fancy Ram was the first to succumb. 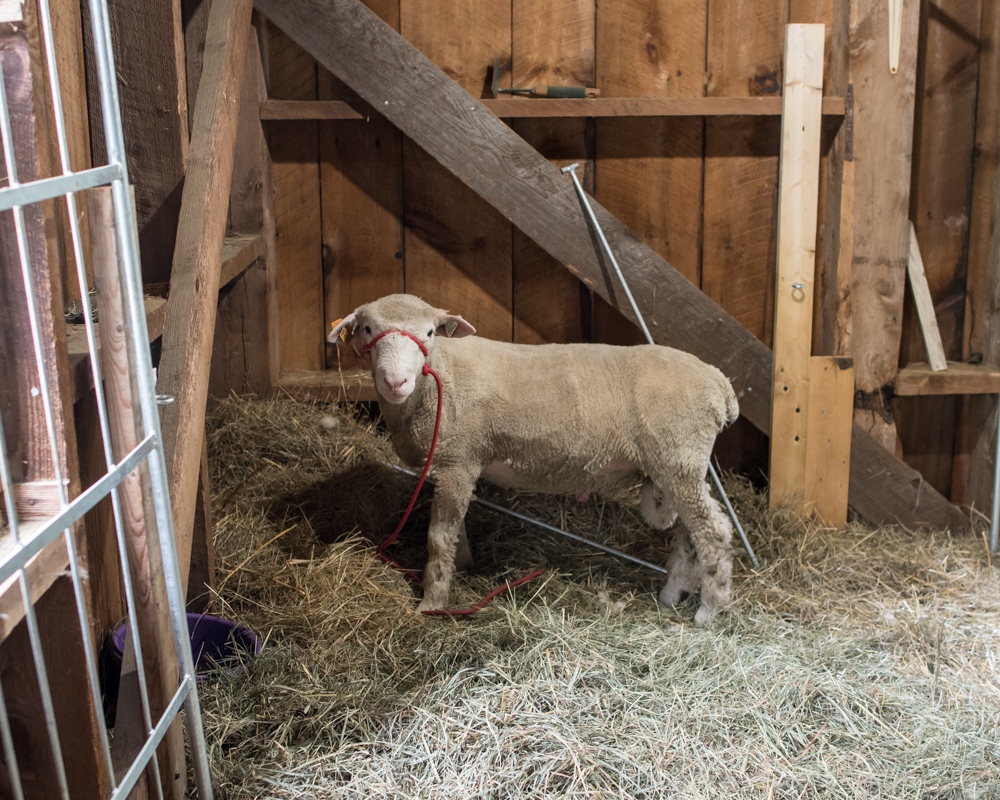 The Cheviot ram is older and more savvy, so it took us much longer to grab him, but desperation breeds patience (and Bob is a really good friend). 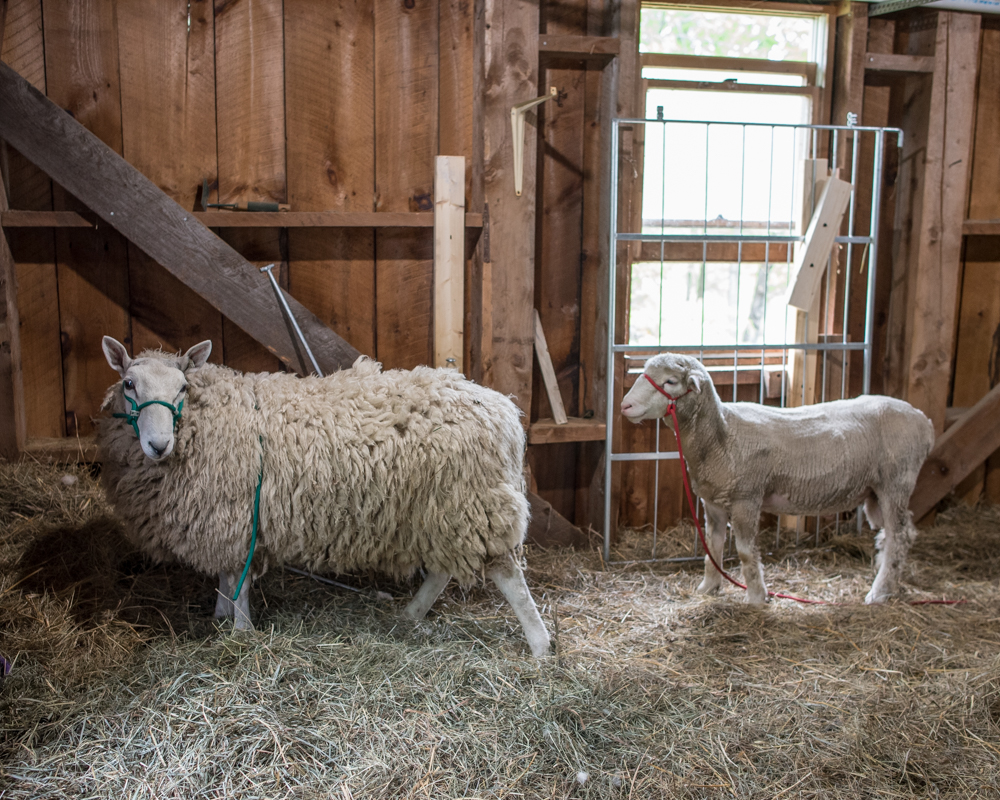 Finally, we backed up my truck and lured Angus into the barn with a bucket of corn. 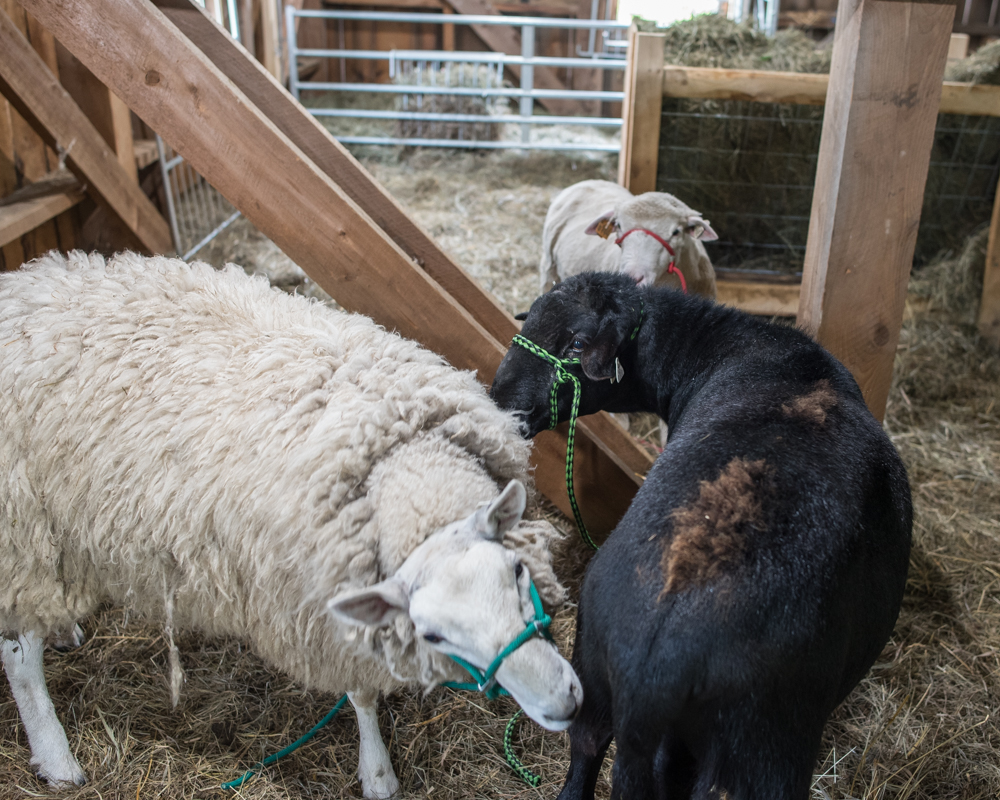 The last step was to make a bit of an obstacle course so the rams couldn’t get a running start and inflict damaging blows to one another.  Bob’s collection of tires-awaiting-recycling was perfect for the task. 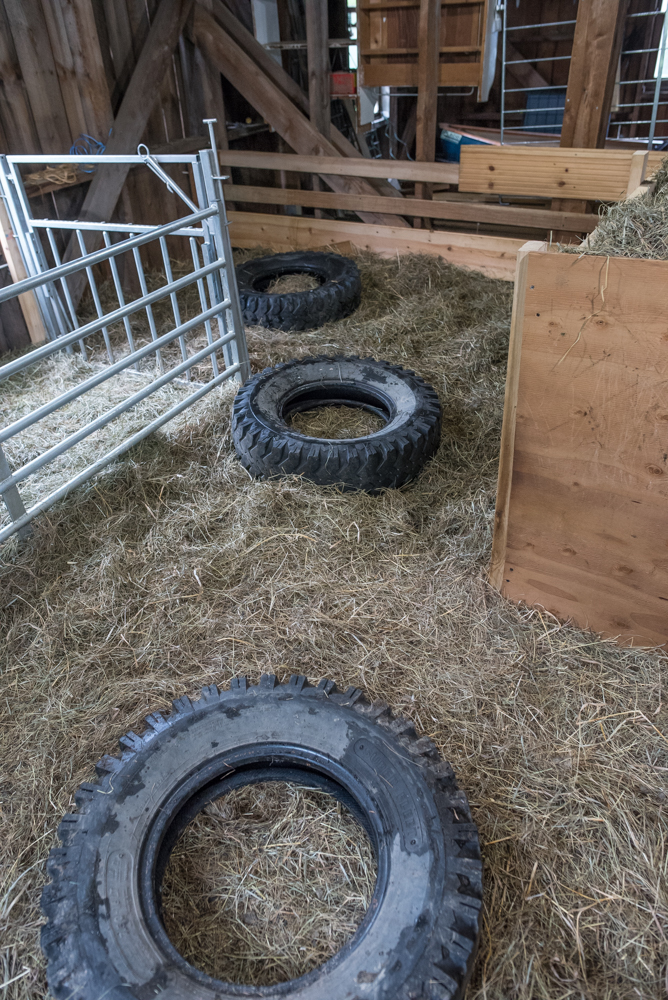 At last check this evening, the rams seemed to be tolerating one another. 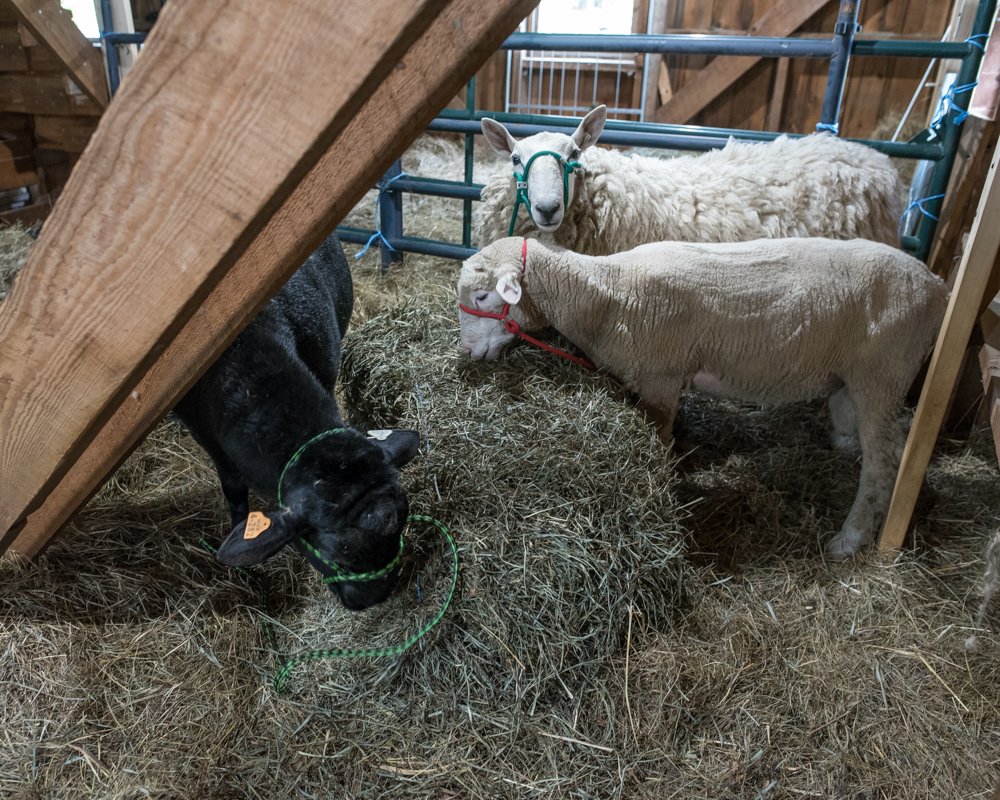 *  I learned when I was picking up Angus today that he may have killed a younger ram last year.  He and his partner ram, Captain, were in a paddock with some young rams, and one of the youngsters developed a nasty broken neck when no one was watching.  This gave me added motivation to ensure that the rams’ temporary home was inimical to acquiring momentum.

**  My cheviot ram normally won’t leave me alone, following me, nuzzling me, gesturing toward butting me with his head.  But if I walk into the field carrying the cleek, he becomes very wary and won’t come within hooking distance.  Sheep have a wholly undeserved reputation for dim-wittedness.

After the recent days’ drama, today I’ll again take refuge in cute lamb photos.  This is the last pair of twins born this season, with mom in the background. 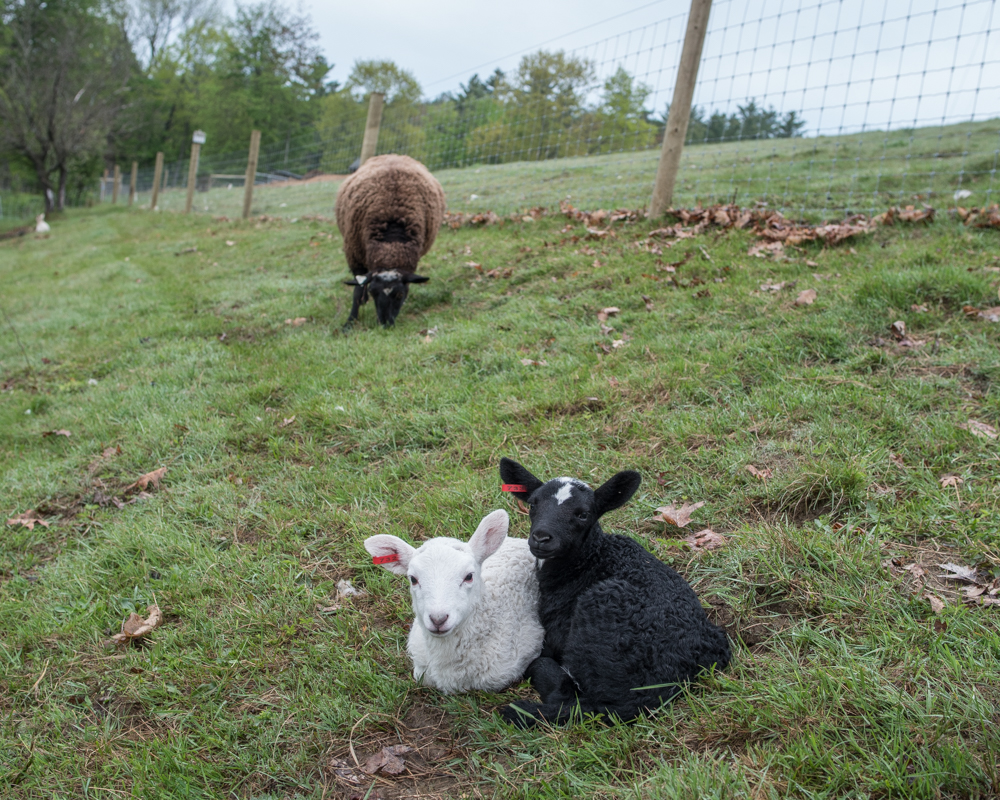 I’m very happy to write that reports of Lefty’s demise were greatly exaggerated.  Last night, Bravo was slow coming down for dinner, and when he showed up, his legs were covered in blood.  The last two times this happened, it meant the demise of a lamb, and when I took an inventory of the flock, I couldn’t find Lefty and assumed that he was the third to fall.  This morning, though, I found him in the field with his mother, alive but missing the bottom part of his lame leg. 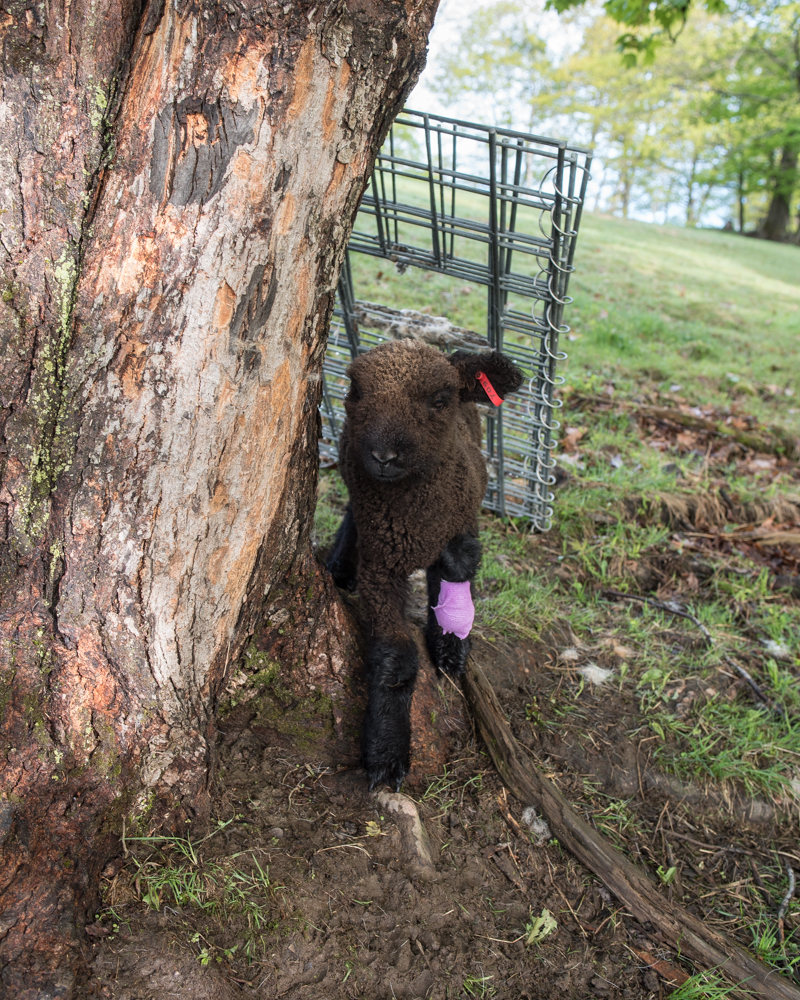 I bandaged him and shot him up with some penicillin, and he didn’t seem too much worse off than before  — he’d been unwilling to use that leg since his encounter with Bravo on the day he was born.  My charitable interpretation of what happened is that the leg had become necrotic, and Bravo felt compelled to do something about it; the medical repertoire of a Maremma is understandably limited.  Regardless, I don’t think I’ll give Bravo another crack at Lefty any time soon, but I’m a bit reassured that, absent extenuating circumstances, Bravo will probably behave himself with the rest of the young lambs.

Now that lambing is done, I’m starting to plan for summer grazing management for the whole flock.  I want to get the two groups back together, and my first step was to test Bravo’s behavior with young lambs.  I know he’s not safe around newborns, and I learned that he’s just fine with 7-week-olds, so I was trying to get a better sense of the changeover point.

I spent perhaps 40 minutes with him when I first brought him over, and he was mostly interested in catching up with all the smells that had accumulated since he’d moved to the lower field.  I checked a little while later, and he seemed to be relaxed and gentle with the newest members of the flock. 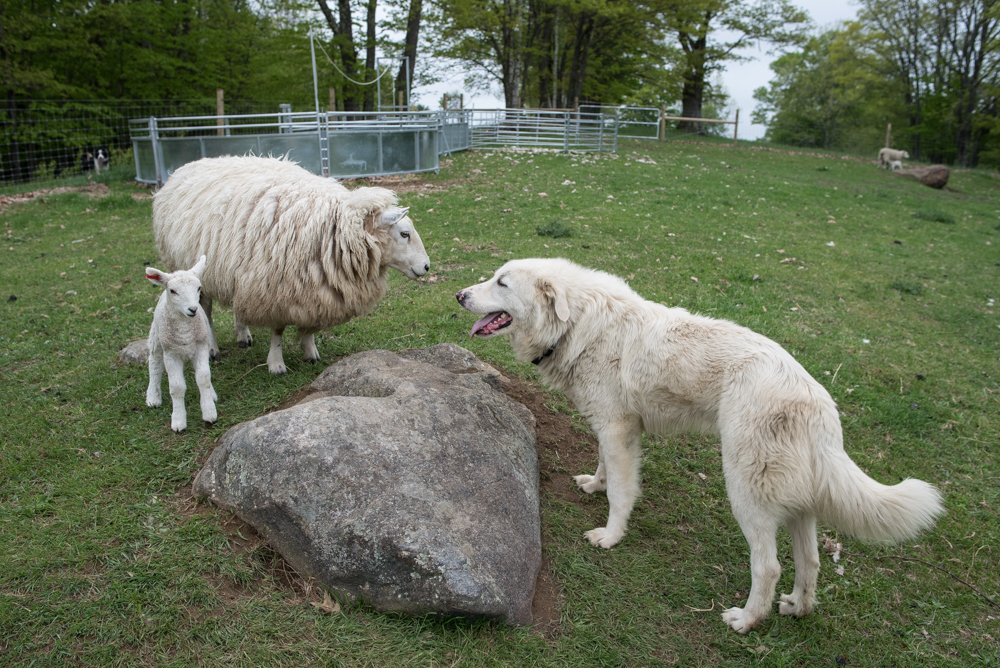 I checked a couple more times, and all was going well until he ate Lefty.  Not sure if he was finishing what he’d started (way too anthropomorphic, I assume) or just identified a weak member of the flock as a dinner prospect. Not so cool either way, and still trying to figure out my next move.