Living with dogs obligates a person to a certain amount of worrying.  I worry about traffic and sharp things on the ground and the random injuries and illnesses that befall active creatures.*  But perhaps most of all, I worry about their encounters with wild creatures — chasing deer and getting lost, harassing coyotes and getting spanked, getting nipped on the nose by a squirrel that was just sick and tired of dogs. When I lived in Boston, skunks elicited my biggest anxieties, as border collies seem to understand skunk spray as some kind of performance-enhancing drug; rather than a deterrent, it becomes habit-forming.  And Cass, in particular, had a knack for getting sprayed on days when I could least afford an unplanned hour of dog washing.

Since we moved to the farm, I’ve yet to encounter a skunk, but I have a bigger and better worry to replace it: 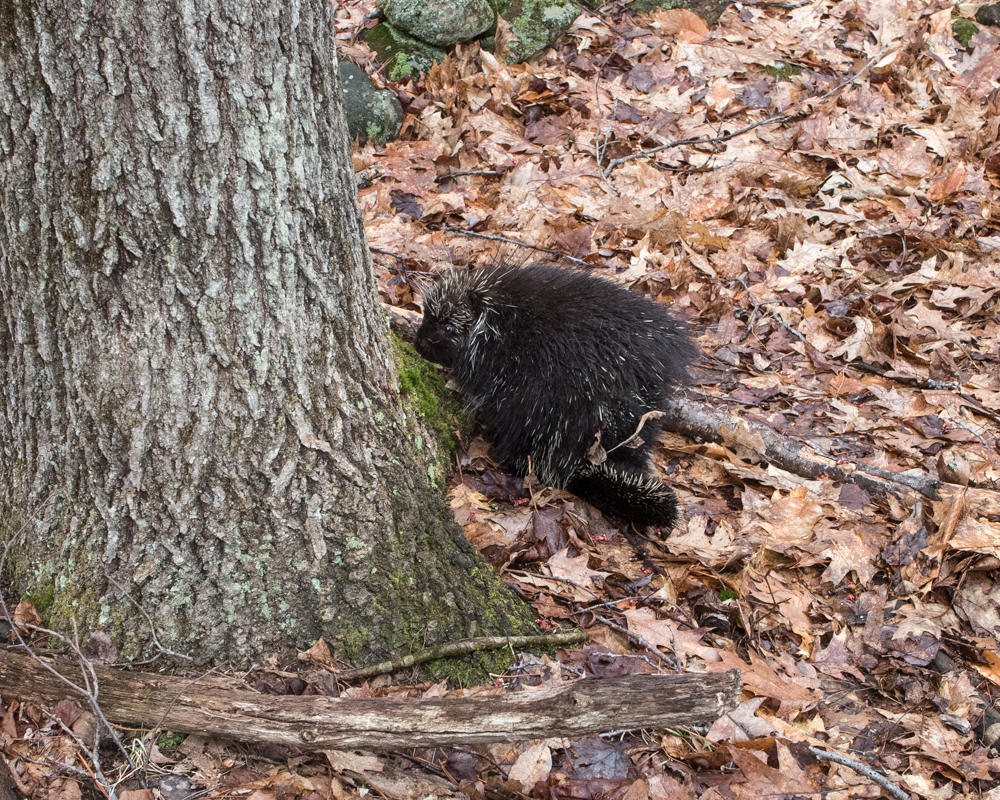 I think I’d only seen one porcupine before we came to New Hampshire, and I don’t think any of the BCs had encountered one.  Shortly after we arrived, though, we were walking up the power line right-of-way near the house and Luc disappeared for a moment.  When he came running back, I could tell he was in distress as he was pawing frantically at his face, but I only understood what happened when he got close enough for me to see the quills.  He had perhaps 60 of them, mostly stuck in the roof of his mouth and piercing his lips.

Since then, I feel a mild paranoia every time we walk in the woods, worried that we’ll encounter another quilled monster.  We got through the winter with no problems, but spring has brought the wild critters out of hiding and the boy and dogs deeper into the woods.  We had an encounter a couple of weeks ago while running near Chapman Pond, close enough that I got a strong whiff of its characteristic odor (like a sweaty carpenter who ate an onion-filled sub for lunch, encountered late in the afternoon of a hot day).  This time I saw the creature just seconds after the BCs did, and I was able to call them off.  Then the one in the photo turned up on our back field a few days ago.  I was again able to dissuade the pups from self-destructive bravery, but I assume my/their luck will run out.  I don’t go anywhere now without a pair of needle-nosed pliers.

*People tell me this is not unlike the worry borne by parents of toddlers, but I don’t think I’m allowed to draw that analogy.